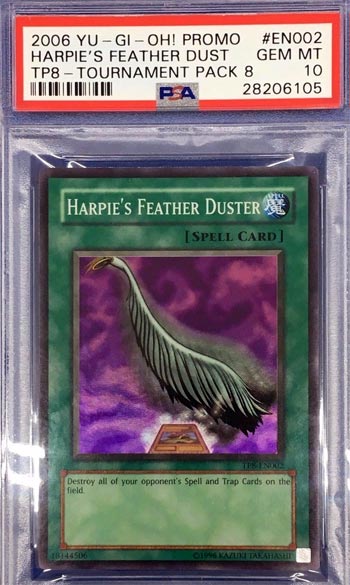 Harpie’s Feather Duster originally was released in 2003 in “Yu-Gi-Oh! Worldwide Edition – Stairway to the Destined Duel”. It was re-released in 2006 as a Secret Rare in Tournament Pack 8.  Tournament Packs were given out at various YGO tournaments.  Super Rare cards from Tournament Packs can be very valuable depending on age and rarity.  This Spell card is banned in the Advanced Format and Limited in the Traditional Format.

In December 2017, this copy sold for $1500. According to the PSA Population Report, there are only two PSA 10’s of this card in circulation right.