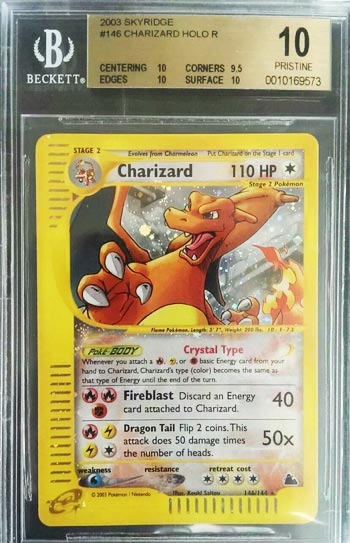 Another Charizard cracks the Top 25 Countdown!  And I believe this is the first card we’ve seen that has been graded by Beckett as opposed to PSA.  Both Beckett and PSA are considered premiere grading services.  As you can see, Beckett also has subgrades for Centering, Corners, Edges and Surface whereas PSA just shows you the overall grade.  It’s said that it’s more difficult to get a graded Beckett 10 vs. a graded PSA 10.  That can skew the prices slightly higher for Beckett 10s.  Beckett calls their 10’s Pristine, and PSA calls their 10’s Gem-Mint.  In November 2017, this card sold for $6450.