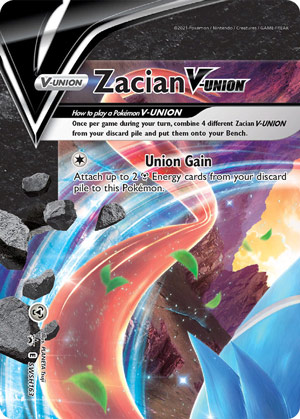 A new week, a new Pokémon V-Union!  For those getting tired of them, good news: as far as I know, this is the last one!  Zacian V-Union is made of the following cards:

Hopefully you’ve already read this article from the official Pokémon site, explaining the Pokémon V-Union in great detail.  If you haven’t read it, though, I’ll mention the fundamentals throughout this review.  The first bit is not to confuse the list of cards I just gave for an evolutionary line.  A Pokémon V-Union is basically an oversized card made legal by dividing it up into four normal sized cards.

A side effect of all four pieces of a V-Union sharing the same name is that they all count against each other for the 4 Copy Rule.  This means you either run one of each piece or all the pieces you do run are dead cards!  It also means even one piece getting stuck in your Prizes, or worse, being sent to the Lost Zone, can leave the rest useless.  As this is Zacian V-Union, let me stress that is the entire name.  So Rusted Sword does not work with Zacian V-Union.  Rusted Sword specifically says “Zacian V” in its effect, as opposed to “a card with Zacian in its name” or “a Pokémon V with Zacian in its name.”  Zacian V-Union is a Metal type.  This has been a good to great typing over the last few Formats.  Even now, it still comes with access to Metal Saucer.  There are also a few other pieces of Metal Pokémon and/or Metal Energy support that can help it out.  The Expanded Format offers more proven support, like Metal Frying Pan and Metal Goggles.  It isn’t very useful for exploiting Weakness.

The only other thing found on this first card of Zacian V-Union is an attack, “Union Gain”.  This shows up on the first piece of all of the other Pokémon V-Union as well.  They all cost [C] to use, and Zacian V-Union’s lets you attach up to two [M] Energy cards from your discard pile to itself.  As always, only basic Metal Energy counts as [M] when not attached to a Pokémon.  For the other V-Unions, Union Gain is the same except it attaches whatever Energy type matches that Pokémon.  As I said with the others, this is not a good attack.  However, it also is not useless.  If you go second and get Zacian V-Union into play and attacking on your first turn, or if there’s any other time when your opponent cannot attack you very well, it can be worth it.  Most of the time, though, your opponent will be happy you had to spend a turn powering up, because that means they basically get a “free” attack on you.

As with all the other Pokémon V we’ve looked at, the first piece is underwhelming, but not awful.  As such, it will receive a two out of five for each format.