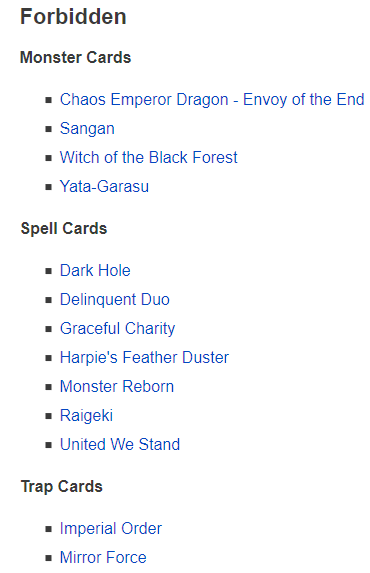 Cards have always been Limited, but October 2004 marked the first time that cards were forbidden from use. 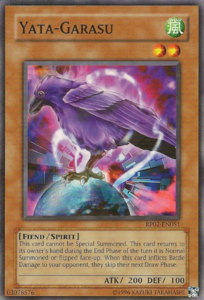 Chaos Emperor Dragon and Yata-Garasu were notorious for their game-winning combo, and in general, both their respective and combined abilities to outright win the game without the opponent having much room to counteract

United We Stand was the least powerful card on this list, but it still seems to have been banned with similar intent of allowing other stat-boosting Equip Spells to shine.

The ban of Imperial Order was a logical consequence. With several power spells gone, it’s less necessary for the meta.

The ban of Mirror Force, Dark Hole and Raigeki indicates that Konami wanted to reduce the amount of +1’s in the game, make it harder to opportunities for direct attacks and in general they wanted to encourage players to summon strong monsters again.  Prior to these bans, players had modest monster line-ups with floaters and monsters which got effects the turn they were summoned.  Torrential Tribute was probably left alone because the player’s monster(s) were at risk too and the opponent had a chance to finish their turn before their life points were vulnerable.

Witch and Sangan were banned too.  This was overkill for two reasons.  First, they were part of the CED/Yata combo, though Yata is already taken care of in this list.  Second, it doesn’t go along with the theme of banning one staple but still allowing another similar staple.  I think this is why Sangan was unbanned for the next format.