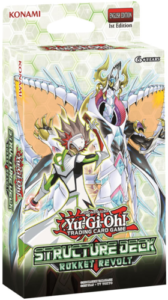 It’s been a while since we’ve had a Structure Deck not part of the retrain series that doesn’t have a whole bunch of Cyberse stuff in it. Hello Pojo Readers, Crunch$G here to tell you what you should know about the new Rokket Revolt Structure Deck. This deck primarily focuses on Revolver’s Rokket cards from the anime, along with some new boss monsters for the Topologic and Borrel series, plus a few other Dragons because everybody loves Dragons, right? Not only do you got new cards, but like with any other Structure Deck, you got some worthwhile reprints in here to add value to the product you’re opening, especially in this one with some of the quality Traps Revolver used in the show being in here, so let’s get to talking about these new Rokkets and stuff. 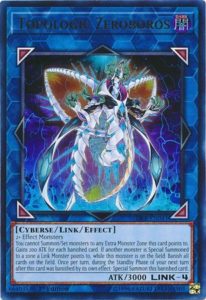 First off is all the new cards in this Structure Deck, mostly cards that support Rokkets. Silverrokket Dragon is a Level 4 DARK Dragon that triggers when a Link Monster targets it with an effect to destroy itself and then banish a card from your opponent’s Extra Deck at your choice, and it also has the standard Rokket effect where it summons another one from the deck on the End Phase in which it was destroyed that turn. Rokket Tracer is a Level 4 DARK Dragon Tuner that as a Quick Effect lets you target a face-up card you control and destroy it to summon any Rokket monster not named Rokket Tracer from your deck, but you can’t summon from the Extra Deck for the rest of the turn except DARK monsters. Rokket Recharger is another Level 4 DARK Dragon that sends itself from the hand to the graveyard when a DARK monster(s) you control 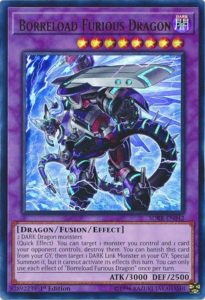 summoned from the Extra Deck was destroyed and after being sent to the graveyard will revive a DARK monster with a different name from the destroyed monster(s), also it cannot be targeted for an attack on the field while you control a DARK Monster that was Special Summoned from the Extra Deck. Exploderokket Dragon is a Level 7 DARK Dragon that when targeted by a Link Monster’s effect will destroy itself and deal 2000 damage to each player and at the End Phase of the turn it was destroyed will summon another Rokket from the deck. Absorouter Dragon is a Level 7 DARK Dragon that Special Summons itself from the hand if you control a Rokket monster and searches for a Rokket monster when sent to the graveyard. Checksum Dragon is a 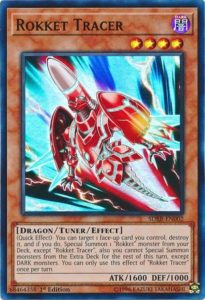 Level 6 DARK Dragon that Special Summons itself from the hand when your opponent declares an attack and then increases your life points by half of it’s DEF (original DEF of 2400) and it cannot be destroyed by battle while in Attack Position. Borrel Supplier is a Continuous Spell that revives a Rokket during the Standby Phase if you control a Borrel monster and said Rokket is destroyed in the End Phase. Rapid Trigger is a Quick-Play Spell that lets you Fusion Summon any Fusion by destroying the materials on the field, but the Fusion Summoned monster can only attack monsters Special Summoned from the Extra Deck and is unaffected by the activated effects of monsters Special Summoned from the Extra Deck. Zero-Day Blaster is a Normal Trap that lets you tribute a DARK Link Monster to target cards on the field equal to its Link Rating and destroys them. Execute Protocols is a Continuous Trap that during each Battle Phase lets 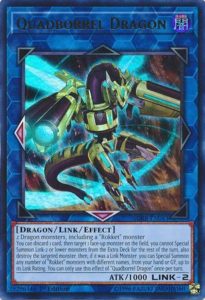 you banish a DARK Link monster from your graveyard to target a Borrel monster you control and let it gain ATK equal to the banished monster’s ATK for the turn. Topologic Zeroboros is a Link-4 DARK Cyberse with arrows pointing at all 4 corners, needs only 2+ Effect monsters to summon, prevents you from summoning to the Extra Monster Zones it points to, gains 200 ATK for each of your banished cards, banishes every card on the field if a monster is Special Summoned to a zone a Link Monster points to while you control this, and during the next Standby Phase it will Special Summon itself if it was banished off its own effect. Borreload Furious Dragon is a Level 8 DARK Dragon Fusion of any 2 DARK Dragons, as a Quick Effect lets you target a monster you control and a card your opponent controls and destroys them and Furious Dragon can banish itself from the graveyard, except the turn it was sent there, to revive a DARK Link Monster, but it cannot activate its effects the turn it is revived. Finally, Quadborrel Dragon is a Link-2 DARK Dragon of any 2 Dragons, including a Rokket, has arrows pointing Down and Left, and lets you discard a card to target a face-up monster on the field, prevent you from summoning Link-2 or lower monsters for the rest of the turn, and destroys the targeted monster and if the monster was a Link Monster, you can summon Rokket monsters with different names from your hand or graveyard up to the monster’s Link Rating. 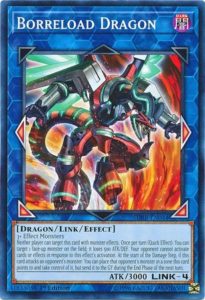 Basically, in this Structure Deck you have reprints for every Rokket card under the sun. Anesthrokket Dragon, Autorokket, Magnarokket, Shelrokket, Metalrokket, Rokket Synchron, Squib Draw, Quick Launch, Boot Sector Launch, Borrel Regnerator, and Link Turret. Gateway Dragon is also in here for any other DARK Dragon players. Defrag Dragon is in here, as it’s been a popular option in some decks. Labradorite Dragon gets its first reprint ever in here. Paladin of Felgrand and Dragon Knight of Creation make another 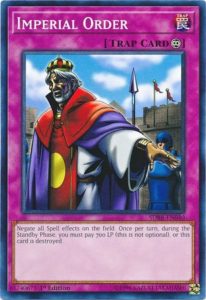 appearance in another Structure Deck here. Keeper of the Shrine is a decent reprint. World Chalice Guardragon is a great reprint to have for a lot of decks. Raiden, Hand of the Lightsworn is a solid reprint in here. Dragon Shrine and Return of the Dragon Lords are great reprints for any Dragon player. You got another Polymerization reprint if for some reason you don’t have it already. Twin Twisters is reprinted again and it’s still a pretty good one. Red Reboot is a great reprint for many to have. Mirror Force is never bad to have. Imperial Order is in this Structure Deck. Borreload Dragon makes for one of the best reprints in this deck. Triple Burst Dragon is a nice reprint. Finally, Booster Dragon gets a reprint in fairly quick time before it gets out of print for too long.

A lot of the cards in here actually offer some pretty good plays in many Dragon decks, especially Rokket Tracer with a few other Rokket cards. Overall this is still a good Structure Deck as it makes Rokkets much better now, but it also allows Dragon decks in general to get a little boost. The reprints in here are worthwhile as well with cards like World Chalice Guardragon, Red Reboot, Imperial Order, Borreload Dragon, and Triple Burst Dragon being some of the best ones. There’s just some really good value in this Structure Deck that already gives good support to a well established deck, so it’s worth picking three of these up, especially for Dragon players.