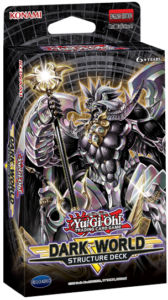 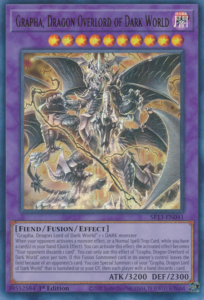 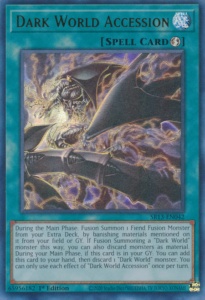 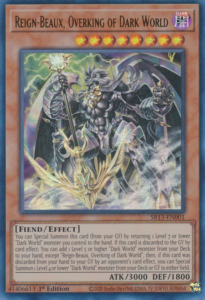 lets you target up to 3 cards in either graveyard and banish them, then it lets you discard a Fiend monster, also you can banish this card from the graveyard, except during the turn it was sent there, to add a banished Fiend to your hand. Dark World Archives is a Continuous Spell that can let you discard a Dark World monster during your Main Phase to have all Dark World monsters you control gain 100 ATK times that monster’s Level for the turn and can let you draw 2 and discard 1 if a Fiend monster is discarded by the effect of a Dark World card. Dark World Punishment is a Counter Trap that can negate an opponent’s Normal or Special Summon, destroy 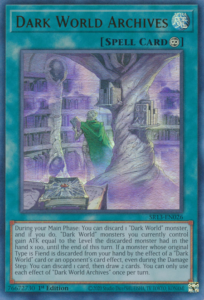 that card, and then lets you discard a Fiend monster, also you can banish this card from the graveyard instead if a Dark World monster(s) you control would be destroyed by battle or opponent’s card effect. Grapha, Dragon Overlord of Dark World is a Level 10 DARK Fiend Fusion between Grapha, Dragon Lord of Dark World and any DARK monster, can change an opponent’s monster effect or Normal Spell/Trap Card effect that’s activated into making you discard a card, and it can let you Special Summon a Grapha, Dragon Lord of Dark World that’s banished or in your graveyard if this Fusion Summoned card leaves the field by an opponent’s card. Finally, Dark World Accession is a Quick-Play Spell that can let you Fusion Summon any Fiend Fusion from your Extra Deck by banishing materials mentioned on it from your field or graveyard, and you can also discard cards as material if summoning a Dark World monster this way, also while this card is in your graveyard you get to add it back to your hand by discarding a Dark World monster. 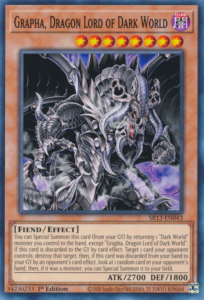 Now that we went over the new cards, we got the reprints in this Deck. As you might guess, we got basically every Dark World card in here as we see reprints for the original Reign-Beaux, Lucent, Latinum, Goldd, Sillva, Brron, Beiige, Broww, Scarr, Kahkki, Gren, Ceruli, Zure, Renge, Dark World Dealings, Charge Into a Dark World, Gateway to Dark World, Dark World Lightning, The Forces of Darkness, Dark World 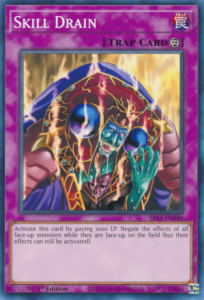 Brainwashing, Dark Smog, the original Grapha, Snoww, and The Gates of Dark World. We also got a small Danger! package with Danger! Bigfoot!, Danger! Thunderbird!, Danger! Mothman!, and Danger!? Tsuchinoko!? all in here. We also got a few generic Fiend monsters that help Dark World like Lilith, Lady of Lament, Fabled Raven, and Absolute King Back Jack. We also got some discarding Spells that offer draw power like Dragged Down into the Grave and Card Destruction. Finally we got some nice Traps that Dark World can take advantage of like Mind Crush, Deck Devastation Virus, Paleozoic Dinomischus, and Skill Drain.

Overall yet another great Structure Deck to make Konami 3-for-3 this year in terms of quality Structure Decks. The Dark World support alone is insane enough to make the Deck more respectable. While the reprints aren’t as big as the Crystal Beast Deck, they didn’t have to be since Dark World has an easier time to find competitve success most likely, but that isn’t to say there aren’t great reprints, cause there are like the Danger! monsters and Skill Drain just to name a few. I know the Traptrix Structure Deck is bound to be great when we get that in 2023, so I hope Konami continues the trend of outstanding Structure Decks.