Home Featured Articles Yu-Gi-Oh Secret Slayers: What You Should Know 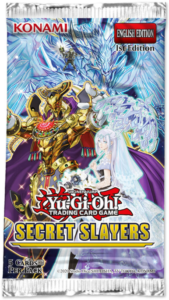 Rocks, plants, or zombies? Hmmm… one of those doesn’t feel natural. Hello Pojo Readers, Crunch$G here to discuss the latest Deck Build Pack that has released in the TCG, Secret Slayers. In this set, we are introduced to three brand new archetypes: Adamancipators, Rikkas, and Eldlich/Eldlixr/Golden Land archetypes. Each archetype is based around a specific type with Rock, Plant, and Zombie for the respective archetypes mentioned previously. Each archetype has their own unique gimmick to them, and they’re open enough to either be played as pure variants or you can try to mix them with other archetypes of their typings, while of course using generic support. Here, I’ll discuss the theming of these archetypes like I always do, so let’s begin. 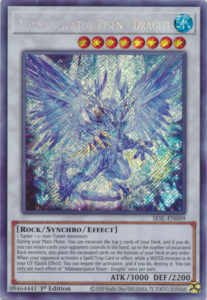 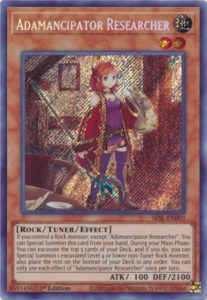 Deck and it can let you summon any Level 4 or lower non-Tuner Rock you excavate while the rest of the excavated cards go to the bottom of the Deck. The next set of monsters are the Adamancipator Crystal monsters, who each are Level 4, have different attributes, gain certain abilities upon being Special Summoned off an Adamancipator card, and while in the graveyard can return a Synchro of a matching Attribute to the Extra Deck to place your Crystal on top of the Deck. Leonite is your FIRE monster and it’s Special Summon ability lets you put any Adamancipator card in your hand or graveyard to the top of your Deck. Raptite is your WIND monster and it does the same thing as Leonite does, only for Rocks instead of Adamancipator cards. Finally you got 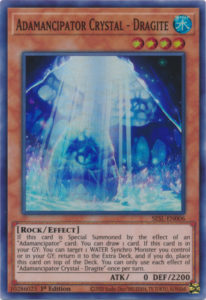 Dragite, your WATER monster that lets you draw a card. Finally, you got the Synchro trio of Adamancipator Rise monsters, who are all generic, have Attributes matching the Crystals they’re named after, can excavate cards for effects, and gain Quick Effects while you got a monster with the same Attribute as the Synchro in your graveyard. Leonite’s Synchro of course is FIRE, Level 6, can excavate the top 5 cards of your Deck to add an excavated Adamancipator card to your hand while the rest go to the bottom of the Deck, and a Quick Effect while a FIRE monster is in the graveyard to target and Special Summon any Rock from your graveyard. Raptite’s Synchro is Level 6, WIND, can excavate the top 5 cards to Special Summon an excavated Rock in Defense Position while the other cards go to the bottom of the Deck, and it’s Quick Effect 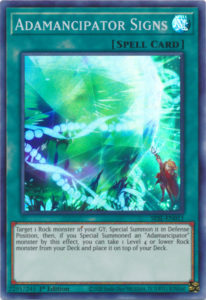 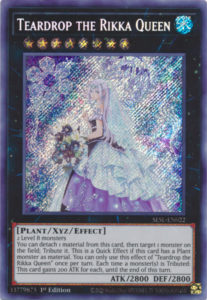 The next archetype is the WATER Plant-based Rikka archetype, an Xyz archetype that focuses on tributing monsters. Rikka Petal is a Level 1 that during your Main Phase lets you take a Rikka monster from your Deck, that isn’t another Petal, and lets you either add it to your hand or send it to the graveyard, then you can’t Special Summon any monsters for the rest of the turn that aren’t Plants, also Petal can revive itself during the opponent’s End Phase if you control no monsters or all monsters you control are Plants. Now we get into the monsters with matching Levels, but swapped stats and differing effects. Primula the Rikka Fairy and Cyclamen the Rikka Fairy are your Level 4s with Primula being able to be Special Summoned from the hand if a monster you control is tributed and can target up to 2 Plants you control to increase their 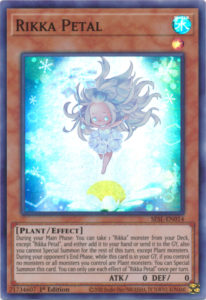 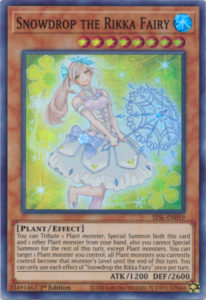 Special Summoned from the graveyard if a Plant you control is tributed, but Erica is banished when she leaves the field. Snowdrop the Rikka Fairy and Hellebore the Rikka Fairy are your Level 8s with Snowdrop being able to tribute a Plant to Special Summon both this card and another Plant from your hand and preventing you from Special Summoning non-Plants for the rest of that turn and she can target another Plant you control to make every other Plant’s Level become the targeted monster’s Level for the turn, then you got Hellebore that when your opponent activates a monster effect that targets a monster you control while you control a Rikka monster, then as a Quick Effect you can tribute Hellebore from the hand or face-up from the field to negate that effect and then while in the graveyard she can tribute a Plant to be Special Summoned 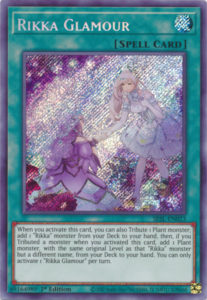 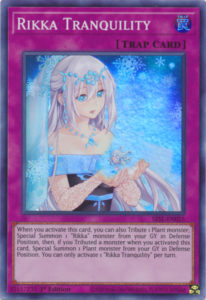 way you can add a Rikka monster from your Deck to your hand and if you tributed a monster, you can search for any Plant with a different Level from the searched Rikka monster. Rikka Flurries is a Continuous Spell that if you tribute a Rikka you control, you can make the opponent tribute a monster of their choice, but Flurries destroys itself during the opponent’s End Phase if you control a face-up non-Plant monster. Rikka Tranquility is a Normal Trap with the same optional cost as Glamour, can Special Summon a Rikka from the graveyard in Defense Position and if you did tribute a Plant, you can revive any Plant from your graveyard in Defense Position. Finally, Rikka Sheet is another Normal Trap with that optional cost, can target a monster the opponent controls to prevent either player from activating the monster’s effects that turn, then you gain control of that monster for the turn as a Plant if you did tribute a monster to activate this card. 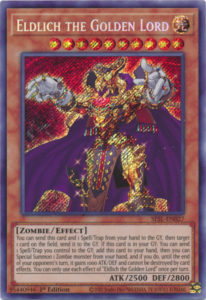 The final archetype is the group of Eldlich, Eldlixir, and Golden Land cards with only 1 monster so far and the rest of the cards being Spells and Traps. Eldlich the Golden Lord is a Level 10 LIGHT Zombie who you can send from the hand to the graveyard alongside any Spell/Trap to target a card on the field and send it to the graveyard, also your Golden Lord can send a Spell/Trap you control to the grave to be added from the graveyard to the hand, then it can let you Special Summon any Zombie from the hand (including itself) and until the end of the opponent’s turn that monster gains 1000 ATK/DEF and cannot be destroyed by card effects. Cursed Eldland is a Continuous Spell that won’t let you attack with non-Zombie monsters, lets you pay 800 LP to search for any Eldlich monster or Golden Land Spell/Trap, and if sent from the Spell/Trap Zone to the 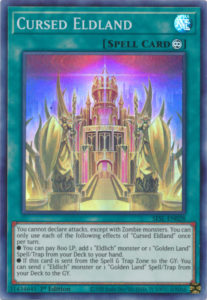 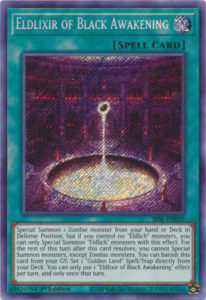 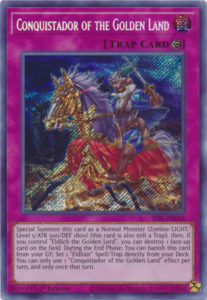 Conquistador of the Golden Land as another Level 5 LIGHT Zombie Normal Monster with 500/1800 stats and its effect upon summon while you control Eldlich the Golden Lord lets you destroy a face-up card on the field. Then, you got the Counter Trap that is Golden Land Forever! that at the cost of tributing a Zombie negates any Spell/Trap Card or monster effect while you control an Eldlich monster and destroys the negated card. Finally, El Dorado Adlelantado is a Normal Trap that if you control an Eldlich monster you can shuffle 3 of your banished Eldlixir Spells/Traps with different names to your Deck to destroy all your opponent’s cards or you can shuffle 3 of your banished Golden Land Spells/Traps with different names into the Deck to half the opponent’s LP, then you gain LP equal to their LP. 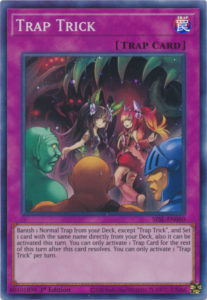 Now we talk about the reprints in the set that are either good generic cards, or cards that can help the themes. You got good Rock related reprints like Doki Doki to summon Rocks from the Deck. Block Dragon is your Rock boss. You got the 4 Rock Koa’ki Meirus: Guardian, Sandman, Wall, and Overload. Also you have Rock Bombardment to send your Rocks from Deck to grave with a little added burn. For Plants, you have Rose Lover to summon your bigger Plants from the hand while having them unaffected by Traps that turn. Lonefire Blossom to tutor any Plant from the Deck. You have the 4 Plant Princesses in here as well: Tytannial, Talaya, Marina, and Chirubime. Finally you got Miracle Fertilizer to revive your Plants and Pollinosis for some generic negation for Plants. Now for Zombies, you got Uni-Zombie to dump your Zombies from hand or Deck to the graveyard while modifying Levels and being a Tuner. Il Blud as a Gemini to summon Zombies from the hand or either graveyard. Nine-Tailed Fox to be summoned from the hand or grave by tributing 2 Zombies and replaces itself with Tokens. Finally, you got Pyramid of Wonders to boost your Zombies a little and protect them from destruction. Now for generic reprints, first you got Upstart Goblin as a great reprint for a card that makes Decks more consistent. Galaxy Cyclone is a great reprint to serve as double Spell/Trap removal over 2 turns. Solemn Judgment is always going to be a great reprint as it’s the most generic negation we have. D.D. Borderline can be interesting to lock out Battle Phases while you have no Spells in your graveyard. Finally, you have the best reprint in Trap Trick to get your Normal Traps from the Deck to let you use that turn.

Overall I feel we have the best batch of archetypes for a Deck Build Pack since maybe Dark Saviors. Adamanciaptors are a very good Deck that can allow for some really good and really interesting plays overall, being kind of a modern take on Sylvans while also having good generic Rock cards to work off of as well. Rikkas, while maybe being the weak link, can add some good value to your Plant strategies if not played pure, has some good Xyzs, and actually synergizes with Lonefire Blossom’s tributing, plus it seems to be the archetype most likely for future support since it’s missing a Rank 4. Finally, you got the Eldlich series for some good control in your Zombie Decks, and might also get more support if the fact of them mentioning Golden Lord Spells without any existing is something to go by, and only 1 Eldlich monster. The reprints are fine as well with Block Dragon, Solemn Judgment, and Trap Trick being the most necessary. You do have good foil upgrades for the Koa’ki Meirus (though Guardian was already Super Rare) and Doki Doki. Overall it’s a decent set with archetypes that could give some good experimentation opportunities.