So recently regions outside the Yu-Gi-Oh OCG territories have finally had a taste of Rush Duels in the form of a video game. Dawn of the Battle Royale released on December 7th, 2021 on the Nintendo Switch exclusively as a digital download and gives players an idea of what Rush Dueling is like. I did intend to order this game at some point, but then I was given a review copy, so here we are. Having experienced Rush Dueling myself before the game ever released, I found this to be a fun opportunity to be able to play the game and give my thoughts, so here we go.

My Experience and Initial Reactions 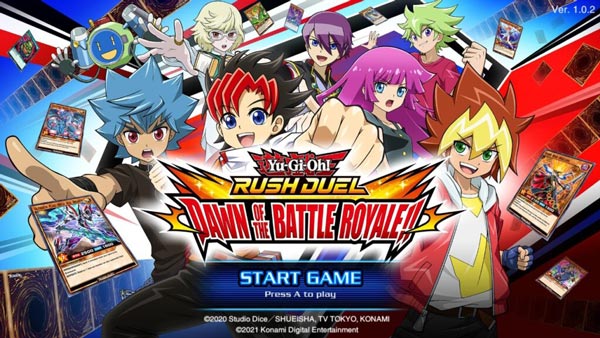 So we start off simply enough by getting an idea of the game’s plot and meeting some of the main characters, simple enough. It was somewhat dialogue heavy, but that’s what I should probably expect when getting an idea of what multiple characters are like at once. The conversation goes until we’re told about the tournament and we learn that my character has not Rush Dueled before. This leads to us traveling the map to head to an area where I can learn how to Rush Duel.

We arrive and the tutorial begins. Unfortunately for those that might of already known how to Rush Duel, there is no option to skip the tutorial, so it is mandatory. I can see that as frustrating for those that already know what to do like myself, but it’s overall fine to have a tutorial to help those that need to learn the basics. The main problem was that we did everything in three duels instead of one, which I thought made things a little tedious and time consuming.

Anyways, the first Duel was the basic of summoning monsters and battling and I was able to notice the first summoning animation for Max Raider, which was pretty nice. After that tutorial was the one for the uses of Spells and Traps, which I appreciate them giving an animation for the effects of these cards. Finally was the Effect Monster tutorial and I get to see the animations for the ace monsters for the main character of the Sevens anime and his rival, respectively being Sevens Road Magician and Multistrike Dragon Dragias.

After this, we were able to have free Duels, though still had some plot to follow. We end up dueling Romin, who used Luke’s Deck for this situation, and I ended up winning. This was probably the best instance to see how fast things can be, so the animations still being kind of slow did of course drag things out, but not for too long. The voice acting is nice to have, even if it brings up the situation of repetitive dialogue as many video games might have, but I’m sure this is all stuff you can turn off since I did forget to check.

After that, I get to free travel a little bit, but decide to head to the next plot point to duel Otes, which was another free Duel where I won, and I ended my session for the review at the point where the free travel was an option for the tournament. Before that, I did head to the shop and buy a few packs and I did obtain a few cards each time I won a Duel, but I was told I don’t get to get to Deck Editing right away, instead we are giving prebuilt Decks we must obtain the cards for and free Deck Editing comes later on, which honestly is fine with having a few cards, but I’m sure you’d like to have more creativity in building Decks as you obtain more cards.

I do think this was an alright game for the experience I had with it, and I’m sure I’ll enjoy playing more in my free time. The graphics and animation look fine, especially with the monster summoning animations. Sevens Road Magician’s animation looked almost straight from the anime, which is fine. My only major gripe might be the tutorial being so long, especially since it didn’t teach Maximum Summoning out the gate, which I can understand. It would of been nice to get all the basics in one Duel instead of three, but I can understand with the pace of how Rush Duels can be. One thing I do question is the $40 and if that’s worth it. In Japan, you can at least get a physical copy with promos, including a Dark Magician Girl and Pot of Greed. Here you’re stuck with the digital copy, meaning no free promos. I would of thought $20 would of been a good price for this, but I can see this game going on sale like many others. It’s a fine game for those that want to experience Rush Dueling still if you’re willing to pay the price tag. I’m sure I’ll enjoy the game more as I go along.