Math, dragon maids, and giant bosses? Yep, sounds like a normal trio to me. Hello Pojo Readers, Crunch$G back here to discuss the newest side set to the Yu-Gi-Oh Trading Card Game, Mystic Fighters. Like previous side sets like Hidden Summoners and Infinity Chasers, this set gives us support for three brand new archetypes to the game. The first one is the Mathmech archetype, a Cyberse based archetype full of Level 4 monsters to help Synchro and Xyz Summon as well as potentially OTK. Then we got the Dragonmaids who use their maiden forms to set up your plays while the dragons do extra things in the hand and are your bodies to battle with. Thirdly, you got the Generaider archetype full of Level 9 bosses of different types that also work well together. Now that I got the brief details out of the way, I’ll get into the specifics. 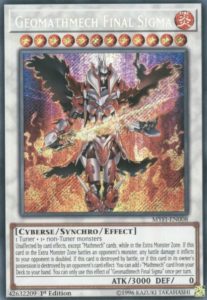 First off, the Mathmech archetype. Mathmech Sigma is a Level 4 LIGHT Cyberse Tuner that can Special Summon itself from the hand or graveyard if there’s no monster in your Extra Monster Zone at the cost of Sigma being banished when it leaves the field and locking your Extra Deck summons to Cyberse monsters, plus it can be treated as a non-Tuner for the Synchro Summon of a Mathmech monster. Mathmech Nabla is a Level 4 DARK Cyberse Tuner that lets you tribute a Cyberse monster to Special Summon a Mathmech monster from your Deck, and it can target a Cyberse monster in the Extra Monster Zone and allow it to attack monsters twice that turn when Nabla is sent to the graveyard. Mathmech Addition is a Level 4 FIRE Cyberse that can Special Summon itself from the hand by boosting a monster’s ATK by 1000, but it’ll 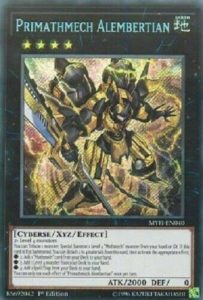 lock your Special Summons from the Extra Deck to Cyberse monsters and Addition cannot attack the turn it was summoned that way. Mathmech Subtraction is basically the same as Addition, only it debuffs a monster by 1000 ATK instead of boosting it. Mathmech Multiplication is a Level 4 EARTH Cyberse that can make a Level 4 Cyberse monster you control become Level 8 and when sent to the graveyard can double the ATK of a Cyberse monster in the Extra Monster Zone. Mathmech Division is another Level 4 EARTH Cyberse that tributes a Cyberse in the Extra Monster Zone to summon up to 1 Level 4 Cyberse each from your hand and graveyard, plus when sent to the graveyard can halve the ATK of a monster on the field. Geomathmech Magma is a 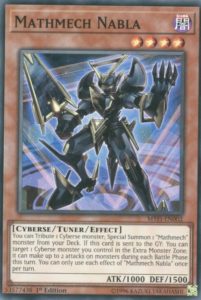 Level 8 FIRE Cyberse Synchro Tuner that only needs any Tuner and any non-Tuner(s), can target and destroy up to two of the opponent’s cards when it destroys a monster in battle, and when Magma is destroyed by the opponent it’ll let you search for any Mathmech Spell or Trap. Geomathmech Final Sigma is a Level 12 FIRE Cyberse that needs any Tuner and any non-Tuner(s), unaffected by non-Mathmech cards while in the Extra Monster Zone, deals double battle damage when battling a monster while in the Extra Monster Zone, and searches for any Mathmech card when destroyed by the opponent. Primathmech Laplacian is a Rank 4 EARTH Cyberse Xyz that needs 3 Level 4 monsters, can detach a material from itself to save a Mathmech from destruction, and can detach up to 3 Xyz Materials to apply any of the following effects equal to the materials 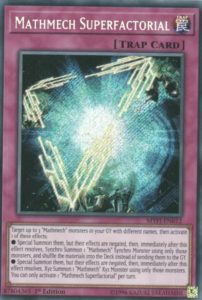 detached: send a random card from the opponent’s hand to the graveyard, send an opponent’s Monster to the graveyard, and send an opponent’s Spell/Trap to the graveyard. Primathmech Alembertian is another Rank 4 EARTH Cyberse Xyz that needs 2 or more Level 4 monsters, can tribute itself to summon a Mathmech from your hand or graveyard, can detach 2 materials upon Xyz Summon to search for any Mathmech card or detach 3 materials upon Xyz Summon to search for any Level 4 monster or detach 4 materials to search for any Spell or Trap. Mathmech Equation is a Normal Spell that revives any Mathmech and gives it 1000 ATK for the turn. Mathmech Billionblade Nayuta is an Equip Spell that can only equip to a Cyberse monster, can send a Mathmech from the Deck to the grave during damage calculation to boost a battling Mathmech’s ATK by the ATK of the sent monster until the end of the turn, and upon this card’s destruction lets you retrieve a Mathmech card of a different name from your graveyard. Mathmech Superfactorial is a Normal Trap that targets up to 3 Mathmechs in your graveyard and Special Summons them to immediately perform a Synchro or Xyz Summon of a Mathmech monster with the summoned monsters. Finally, Mathmech Induction is a Continuous Trap that boosts all your Cyberse monsters by 500 ATK and can send itself to the graveyard while you control a Mathmech to destroy an opponent’s card. 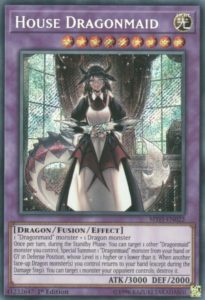 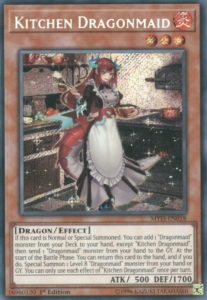 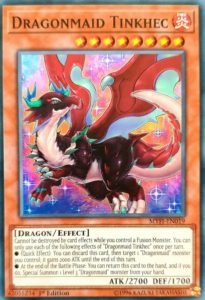 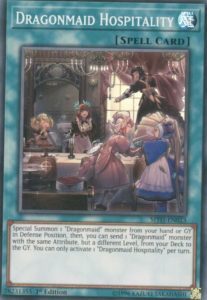 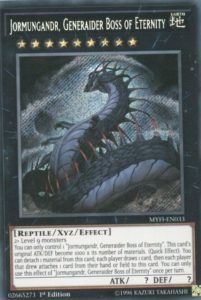 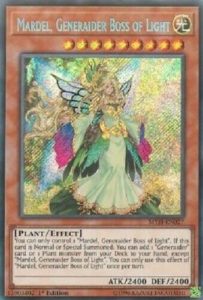 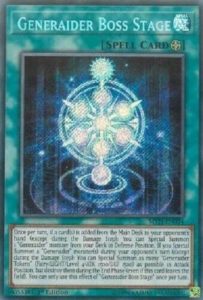 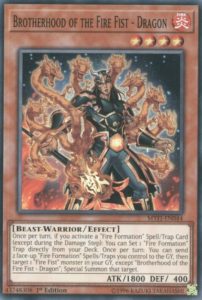 Finally, the reprints in this set, which are all in holofoil of course. First off, you got a Jinzo reprint in here for some reason. Lonefire Blossom makes for a good foil reprint in this set. Debris Dragon is another card that’s nice to have as a foil. Brotherhood of the Fire Fist – Dragon is a long awaited reprint after the Fire Fist support. Tempest, Dragon Ruler of Storms and Lightning, Dragon Ruler of Drafts are logical reprints after Tempest was unbanned. Balancer Lord getting a foil reprint is deserved. True King of All Calamities is a great reprint in this set. Super Rejuvenation is a strong reprint after it was unbanned recently. Monster Gate is good to get a second foil printing. Dark World Dealings is a good reprint to have. Rekindling is a nice reprint in foil after returning to three. Dragon Ravine is always nice to have. Appropriate and Heavy Slump are cute draw cards that can mess with the opponent or let you draw when the opponent draws. Finally, another foil print of Waking the Dragon is nice to have.

Overall, these archetypes do seem like a ton of fun. The Mathmechs can be a very powerful OTK deck with Final Sigma that can attack twice with double damage and ATK after you weakened the opponent’s monsters. Dragonmaids are probably going to be the fan favorite archetype since they are Dragons and females, which are usually heavily beloved, and they’re a solid Dragon archetype even after Guardragons took a hit. Finally the Generaider cards could make for a solid deck by itself or some of the Generaiders can fit in decks that match their type, especially the Plant one. The reprints are strong in here as well since there’s a lot of nice cards that are always good in foil as they almost always can find some use, whether in the archetypes or in decks that recently got supported. Not a meta changing set, but a fun set overall for the casual player with some rogue potential maybe.