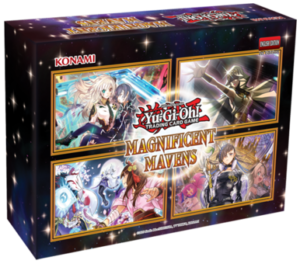 Well this is going to be magnificent. Hello Pojo Readers, Crunch$G here to go over and tell you what you need to know about the Holiday Box for 2022 in the TCG, Magnificent Mavens. This set has been fairly hyped for a while now with us knowing that we are getting support for Sky Striker, Mayakashi, and Witchcrafters alongside retrains of Ishizu’s old cards. Knowing this would also be a reprint set meant we could hope for some good reprints to be included in the set as a whole. We were also told there would be more Pharaoh’s Rares in this set, continuing the rarity from King’s Court. There’s a few things to discuss in this set, so let’s go over all the new support and see if we got some great reprints and Pharaoh’s Rares. We will start with the lottery rarity of the set, that being Pharaoh’s Rares. Now it should be noted the differences between this rarity in the American and European regions, as the American print of this set has Secret Rare text foiling while the European print has the Ultra Rare text foiling, but besides that the hieroglyphs remain on the cards. There are 18 total Pharaoh’s Rares in this set, with 6 coming from the 103 cards part of the main set and 12 coming exclusively in Pharaoh’s Rare. For the 6 cards chosen from the Ultra Rare pool, we have Gravekeeper’s Trap, Millennium-Eyes Restrict, Black Luster Soldier – Soldier of Chaos, Change of Heart, Lightning Storm, and Triple Tactics Talent. Now, for the 12 extra cards included in this set to be just Pharaoh’s Rares, we have Blue-Eyes White Dragon, Red-Eyes Black Dragon, Elemental HERO Neos, Dark Magician Girl, Reinforcement of the Army, Necrovalley, Gold Sarcophagus, The Seal of Orichalcos, Toon Kingdom, The True Name, Crystal Bond, and Mirror Force.

Flash in the Sky For the first archetype to get support in this set, we look at 3 brand new Sky Striker cards from the OCG’s Secret Shiny Box and a VJump promo added on in this set. Surgical Striker – H.A.M.P. is a Level 8 DARK Machine that’s always treated as a Sky Striker card, can be Special Summoned from the hand to either field if you control a Sky Striker Ace monster by tributing a monster from that player’s field, and upon being destroyed in battle can let you target a card the opponent controls and destroys it. Aileron is a Level 1 WIND Machine Now we get to the Mayakashi support and their 2 cards from the OCG’s Secret Shiny Box that were imported in this set. Yuki-Onna, the Icicle Mayakashi is a Link-3 WATER Zombie with all 3 arrows pointing down, requirements to summon being any 2+ Zombie monsters, it being a monster you can only control 1 of, upon being Special Summoned can let you target an Effect Monster the opponent controls and negate its effects, and it has a Quick Effect to banish itself from the graveyard to Special Summon a Zombie Synchro that’s banished or in your graveyard. Ghost Meets Girl – A Masterful Mayakashi Shiranui Saga is a Normal Trap that lets you tribute a Mayakashi or Shiranui Synchro or Link Monster you control to prevent both players from Special Summoning from the hand, Deck, or Extra Deck for the rest of the turn, also you can banish this card from the graveyard to target a banished Zombie monster and return it to your graveyard. Finally, we get a few Mayakashi reprints in this set with Dakki, the Graceful Mayakashi, Hajun, the Winged Mayakashi, Gashadokuro, the Skeletal Mayakashi, and Mayakashi Return all being included. 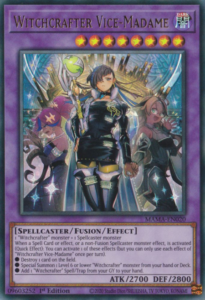 Finally for the Secret Shiny Box imports, we get to the 2 new Witchcrafter support cards and their reprints in this set. Witchcrafter Vice-Madame is a Level 8 DARK Spellcaster Fusion that needs a Witchcrafter monster and a Spellcaster monster to Fusion Summon, and when a Spell Card or effect, or a non-Fusion Spellcaster monster effect is activated, you get a Quick Effect to choose from 1 of 3 effects with each only being able to be used once per turn: the first lets you destroy a card on the field, the second lets you Special Now that we finished the Secret Shiny Box imports, we now finish the Duelists of Pyroxene Duelist Pack from Japan by getting to Ishizu Ishtar’s support for her old Exchange of the Spirit card with 7 brand new cards total, including retrains for her old monsters and Traps. Keldo the Sacred Protector is a Level 4 EARTH Fairy who can let you discard another EARTH Fairy from your hand to Special Summon this card from the of the Spirit is in your graveyard, you can make a player of your choice send another top 5 cards of their Deck to the graveyard. Gravekeeper’s Trap is a Continuous Trap that while Exchange of the Spirit is in your graveyard, your opponent cannot activate effects in their graveyard or Special Summon monsters from the graveyard, during the Main Phase lets you discard a card to add any Gravekeeper’s or EARTH Fairy monster from your Deck to your hand, and during your opponent’s Draw Phase before they draw for turn, you can declare a card name and if your opponent draws the declared card, they must send it to the graveyard. Exchange of Despiar and Hope is a Normal Trap that if you control 3 or more EARTH Fairy monsters, you send as many monsters on the field to the graveyard as possible (min. 1), then each player Special Summons from their opponent’s graveyard to their own field up to the number of monsters their opponent sent to the graveyard, and then if a monster is summoned by this effect and Exchange of the Spirit is in your graveyard, you can set a Trap directly from your Deck. Blast Held by Destiny is a Normal Trap where if the opponent declares an attack, you destroy the monster the opponent controls with the highest ATK (your choice, if tied), and if you do, you inflict damage to your opponent equal to that monster’s original ATK and if Exchange of the Spirit is not in your graveyard, you take the same damage, also if this card is sent from the hand or Deck to the graveyard, you can target a Level 4 EARTH Fairy in your graveyard and add it to your hand. Finally, for all of this support, we also get a reprint for Exchange of the Spirit to go with all the new cards. 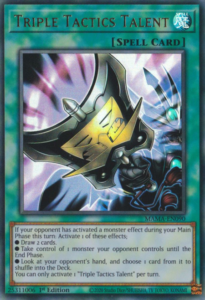 Overall, this has to be one of the strongest sets that Konami has put together in quite some time. There’s some pretty good support for fan favorite archetypes like Sky Striker, Mayakashi, and Witchcrafter. The new Ishizu cards are going to be a massive force in the meta for several different strategies. Swordsoul and Sky Striker both become more budget friendly with this set. There are several good cards in this set that needed reprints for almost every Deck to run. We also got a ton of high demand rarity upgrades that have been requested for a long time now. The Pharaoh’s Rares are alright, though cards like Neos and Crystal Bond are odd choices for a rarity that felt perfect for DM era cards, also there’s some missed opportunities like Envoy of the Beginning not getting the rarity while Soldier of Chaos did and the og Thousand-Eyes Restrict not joining Millennium-Eyes, but hopefully that does change in the future. It’s still a great set worth picking up, especially since you do get 70 sleeves as well with arts of Engage, Kagari’s alternate art, Witchcrafter Holiday, Witchcrafter Unveiling, Yuki-Onna, the Ice Mayakashi, or Mayakashi Metamorphosis.