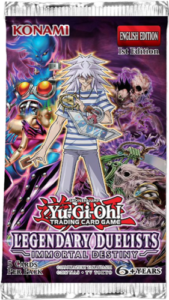 Time to embrace the dark side. Hello Pojo Readers, Crunch$G back here to tell you the things you need to know about the fifth installment of the Legendary Duelists series, Immortal Destiny. The main theme of this set are characters you could consider to be dark from the anime and their archetypes getting supported. Therefore we got support for the Destiny Board and Occult theme, Evil HERO cards, Earthbound Immortal related support, Gimmick Puppets, and more Predaplants and today I’m here to tell you about those cards and the related reprints for each theme. So without further ado, let’s embrace the darkness and see what this set has in store for us. 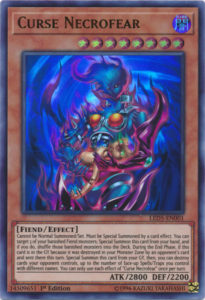 First off is the support for Bakura’s Occult themed deck, mostly around the original Dark Necrofear and Destiny Board. The new boss monster is Curse Necrofear, which is a Level 8 DARK Fiend that cannot be Normal Summoned or Set, must be Special Summoned by a card effect, can Special Summon itself by returning three banished Fiends to the deck, and it revives itself during the End Phase and destroys cards your opponent controls up to the number of face-up Spells and Traps you control if it was sent to the graveyard by an opponent’s card that turn. Dark Spirit of Banishment is a Level 3 DARK Fiend that discards itself if an opponent’s monster attacks to revive a Level 8 Fiend from your graveyard with its effects negated and the attack target becomes that Level 8 Fiend and then you got Dark Spirit of Malice that can discard itself 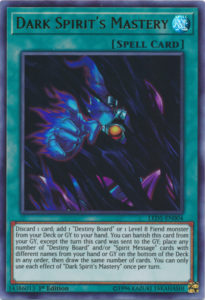 when the opponent activates a card or effect to in response revive a Level 8 Fiend with its effects negated, and both the mentioned cards can go back from the graveyard to the hand if a Level 8 Fiend is sent to your graveyard. Dark Spirit’s Mastery is a Normal Spell that at the cost of a discard can search for Destiny Board or any Level 8 Fiend and it can banish itself from the graveyard, excluding the turn it was sent there, to return any number of Destiny Board and/or Spirit Message cards from your hand or graveyard to the bottom of the deck in any order and then lets you draw cards equal to the number of cards sent back to the deck. Finally for new cards in this theme, Sentence of Doom is a Continuous Trap that once per turn lets you target Fiends in your graveyard up to the number of Destiny Board and/or Spirit Message cards you control and adds them to your hand and this card can also send itself to the graveyard to place a Spirit Message from your deck onto the field and treat it as being placed there via Destiny Board. 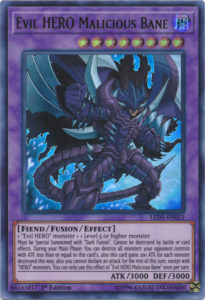 The next theme to talk about is the Supreme King’s Evil HERO archetype. First off is the new Level 8 DARK Fusion that is Evil HERO Malicious Bane, which requires any Evil HERO and any Level 5 or higher monster, must be Special Summoned via Dark Fusion, cannot be destroyed by battle or card effects, and during your Main Phase lets you destroy every monster the opponent controls with ATK less than Bane’s, boost Bane’s ATK by 200 for each monster destroyed, and then locks you to only attacking with HEROs for the rest of the turn. Evil HERO Adusted Gold is a Level 4 LIGHT Fiend that can discard itself from the hand to search for Dark Fusion or a card that lists Dark Fusion in the text from the deck and on the field it cannot attack unless you control a Fusion monster. Evil HERO Sinister Necrom is a Level 5 DARK Fiend that can 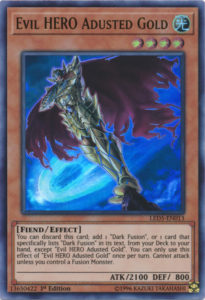 banish itself from the graveyard to summon any Evil HERO monster from the deck that isn’t another Sinister Necrom. Supreme King’s Castle is a Field Spell that lets you Fusion Summon any Evil HERO Fusion without having to use Dark Fusion as the Fusion Spell and once per turn, during damage calculation if your Fiend is battling an opponent’s monster, can send an Evil HERO from the deck or Extra Deck to the graveyard to boost your monster by 200 ATK times the level of the sent monster until the end of the turn. The final new card in this theme is Evil Mind, which is a Normal Spell which lets you select one effect to activate based on however many monsters are in the opponent’s graveyard with 1 or more letting you draw a card, 4 or more searching for any HERO monster or Dark Fusion, and 10 or more letting you search for any Polymerization or Fusion Spell card. 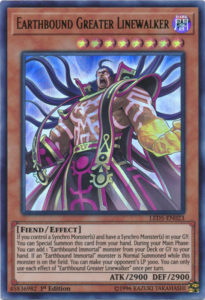 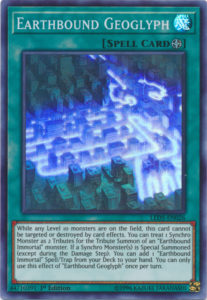 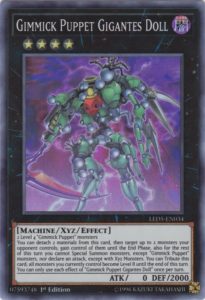 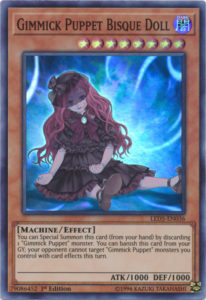 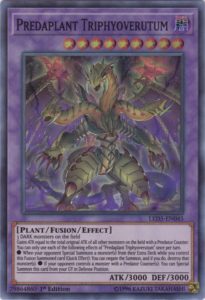 The final supported archetype in here is Yuri’s Predaplant archetype. Predaplant Triphyoverutum is a Level 9 DARK Plant Fusion of any 3 DARK monsters on the field, gains ATK equal to the total original ATK of every other monster on the field that has a Predator Counter, can negate an Extra Deck summon from the opponent if you control this Fusion Summoned card, and can revive itself from the grave in Defense Position if your opponent controls a monster with a Predator Counter. Predaplant Heliamphorhynchus is a Level 8 DARK Plant that can be Special Summoned from the hand if the opponent controls a monster with a Predator Counter and revives any DARK Plant or DARK Dragon that isn’t Heliamphorhynchus upon its destruction by an opponent’s card. Predapractice is a Normal Spell that summons a Predaplant from your hand upon 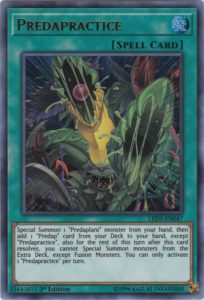 activation and then searches for a Predap card, but you can’t Special Summon from the Extra Deck for the rest of the turn except Fusion Monsters. Predaprime Fusion is a Quick-Play Spell that if a Predaplant monster is on the field, you can Fusion Summon a DARK Fusion from the Extra Deck using monsters from either field as material, as long as it includes at least 2 DARK monsters you control. The final new card for the Predaplant archetype is Predaplanning, a Normal Trap that sends a Predaplant monster from the deck to the graveyard to put a Predator Counter on every monster on the field, which in turn makes any monster with a Level and a Predator Counter become Level 1 as long as they hold the counter, and then this card can be banished from the graveyard to destroy a card on the field if you Fusion Summon a DARK Fusion Monster. 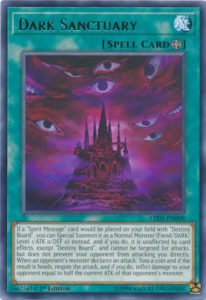 For the Occult reprints, first off you got the original Dark Necrofear as you might of expected. Doomcaliber Knight is also reprinted in here. Diabound Kernel gets its first reprint, and the same goes for Dark Sanctuary. Finally, you got reprints for Zoma the Spirit and Call of the Earthbound to wrap up the Occult related reprints. As for the Evil HERO reprints, you got Malicious Edge, Infernal Gainer, and Infernal Prodigy as the main deck monsters reprinted in here. Evil HERO Malicious Fiend is the sole Fusion of the archetype that received a reprint in this set. You also got reprints for Dark Fusion and Dark Calling for all your Fusion needs. As for the Earthbound Immortal reprints, you got two Earthbound Immortals in here in Ccapac Apu and Wiraqocha Rasca. You also got Fire Ant Ascator and Supay in here along with their related Synchros, 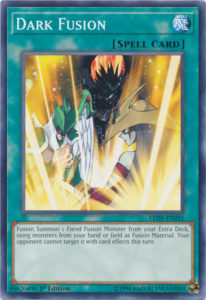 Sun Dragon Inti and Moon Dragon Quilla. With those cards comes Oracle of the Sun since it was originally made to work with the previously named cards. You also got the former Earthbound Revival and Roar of the Earthbound in here with new names, now Earthbound Immortal Revival and Roar of the Earthbound Immortal, to match the OCG naming scheme so they’re searchable off the new Field Spell. The Gimmick Puppet reprints include Gimmick Puppet Dreary Doll, Magnet Doll, Des Troy, and Humpty Dumpty as your main deck monster reprints. Your lone Gimmick Puppet Xyz reprint in here is Number 40: Gimmick Puppet of Strings and your lone Spell reprint is Junk Puppet. The final reprints in here are for the Predaplant archetype of course and you got reprints for Drosophyllum Hydra and Chlamydosundew for the main deck monsters. You got two Fusions reprinted in here in Starving Venom Fusion Dragon and Predaplant Dragostapelia. The final reprints for the archetype goes to Predaponics and Predaplast.

The new Occult cards are pretty neat and helps make a Destiny Board strategy even more viable, though those Level 8 Fiend support cards are useful even without Destiny Board in the question. The Evil HERO support makes the Evil HERO section of the HERO archetype as a whole finally a viable inclusion into a HERO deck and are easily some of the best cards in the set. The Earthbound Immortal support is cool, though locking them to work with Synchros does limit what could of been done, but at least we got easy Level 6 and 8 Synchros out of it. The Gimmick Puppet support helps the archetype somewhat, even though they could of used a Level 8 and more good cards that are less restricting. Finally, the Predaplant support is very strong overall, and the new Fusion will make for a great Super Polymerization target. For the reprints, besides Starving Venom Fusion Dragon, Dark Fusion, and Dark Calling these reprints aren’t the strongest thing in the world, but they’re standard for the archetypes in here, so I guess they’re good in that regard. This is a pretty cool set, as all the Legendary Duelists sets are, and most certainly worth picking up some of the cards in here for collectors or casual purposes.