Wanted to share some details with you around the upcoming releases from Yu-Gi-Oh! TRADING CARD GAME.

Yu-Gi-Oh! TCG Dark Saviors, available starting Friday, May 25, gives a classic horror movie monster the powers it’s known for and introduces brand-new Deck themes for both novice and advanced Duelists. All of the necessary themed cards for each of these Decks can be found in Dark Saviors. 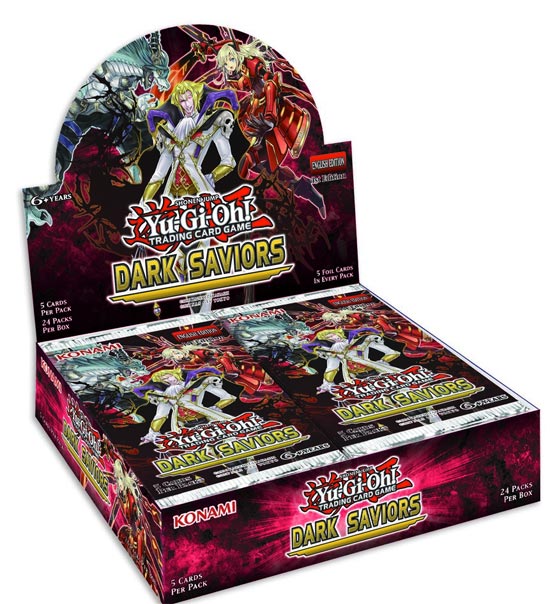 May’s 60-card booster set, Dark Saviors, gives a classic horror movie monster the powers it’s known for and introduces brand-new Deck themes for both novice and advanced Duelists! All of the necessary themed cards for each of these Decks can be found in Dark Saviors, but they can also be augmented using cards from Flames of Destruction, Extreme Force, and Structure Deck: Lair of Darkness.

Dark Saviors reinvents the Vampires of Yu-Gi-Oh! with a new series of cards that can enslave your opponent’s monsters for your own nefarious schemes with a single bite! You can build a Vampire Deck with just the cards in Dark Saviors, but you can make your Deck even stronger with the new “Vampire” Link Monster from Flames of Destruction and cards from Structure Deck: Lair of Darkness.

A clan of skyfaring demihumans who always have each other’s backs! These swashbucklers are trained to call for backup at the first sign of trouble. As long as you can Summon at least one of them from your hand, the rest are sure to follow! The effects on these cards are strong, but simple, making them a good pick for novice and expert Duelists alike.

A heavily armed heroine arrives! Her high-tech arsenal includes transforming power armor that lets her fly faster than a fighter jet or dodge fluidly like water, and can be equipped with a variety of weapon modules to handle the task at hand. Each module also has a powerful secondary mode that becomes available if you have 3 or more Spell Cards in your Graveyard. Even better, you don’t have to just choose one mode or the other. As long as you have at least 3 Spell Cards in your Graveyard, you get both!

Flames of Destruction Special Edition, available starting Friday, June 8, will shake things up with new cards for established Deck themes, including a brand-new Link Monster theme that can be played as its own Deck or spliced into existing strategies, the return of the Elemental Lords, and more.

Each box of Flames of Destruction Special Edition contains: 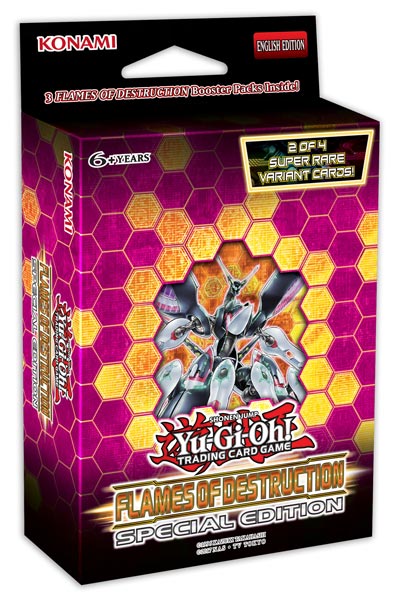 Flames of Destruction shakes things up with new cards for established Deck themes, a brand-new Link Monster theme that can be played as its own Deck or spliced into existing strategies, the return of the Elemental Lords, and more!

These new Link Monsters have flexible Link Materials that let you use them in any Deck, and each one has two abilities: one that you use when you Link Summon the monster and one that’s always active. These powers range from retrieving any Spell or Trap Card from your Graveyard to changing the number of cards you get to draw each turn. With some strategic card placement, you could be drawing up to 6 cards at the start of your turn instead of just 1!

To make the most of these abilities, you’ll want to keep your Link Monsters co-linked. If you do, you’ll get a refund on the cost of the new monsters’ one-shot abilities and their always-on powers will grow much stronger! Try combining these monsters with cards like Tri-Gate Wizard from Structure Deck: Cyberse Link or Firewall Dragon from Code of the Duelist to gain even more from co-linking your monsters.

For over 5 years, the four Elemental Lords have stood alone as keepers of some of the strongest effects allowed in Dueling. In Flames of Destruction, the fifth Elemental Lord finally arrives, along with the monsters tasked to guard their great powers from those who would misuse them! The newest Elemental Lord can only be Summoned while you have exactly 5 LIGHT monsters in your Graveyard and commands the power of Raigeki – the power to destroy all enemy monsters at once! This Elemental Lord is a great fit in Decks built using the LIGHT monsters from Structure Deck: Wave of Light.

On top of all that, Flames of Destruction is full of cards that are useful in any Deck and cards that elevate popular themes to new heights! You could find…