Crunch has been doing these articles about whether cards that are Banned should be still, and that made me realize (as well as conversing with him) than we never reviewed, let alone talked about or touched on any of the changes that happened last month.  This month, as you know if you’re a CotD reader has been all about Legendary Duelists, but I’m hoping to take some time next month to look at some of this.  But, given too, this(these) list(s) only came into effect about 2 weeks ago, I’m not so late here.

We also discussed how many cards sit on the Ban List that haven’t even been reviewed, and I/we would definitely like to get to them, or as many of them as we can, again not mentioning that we haven’t even gone over anything from this list of changes.  But sometimes it’s not the most important, in times like now, when so many new releases come out.  There are only five days in the week, after all. 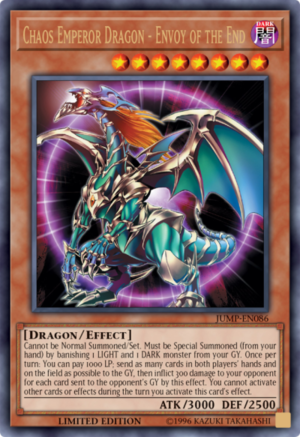 One thing I know that got people talking was that Chaos Emperor Dragon-Envoy of the End had been brought off the Ban List and back to Restricted Status.  Having received an errata a fair while ago, keeping the player from activating any other cards or effects the turn you use CED to nuke the world.  (Also, worth noting, CED is/has been at three in the OCG for a while now too).

And speaking of Chaos Emperor Dragon, Dragons…let’s take a minute to touch on the 2018 Yugioh Championship series prize card, Chaos Emperor-The Dragon of Armageddon.  This card is a Pendulum card, and happens to fall on the near extreme of the low end of the scale, at just a 1.  The Pendulum side lets you pay 1000 Lifepoints to destroy itself and Target a Dragon of yours that’s removed from play, and add it back to your Hand.

That Monster effect should look awfully familiar, however.  Here, the nuke the world effect is mostly intact, but has been tweaked.  The cost is no longer 1000 points, but rather, half your Lifepoints, meaning it could be far more costly than the 1000 of Envoy of the End (or cheaper if used in the end of a game).  But the effect is far more balanced and fair than we found on the original.

You send as many of your cards as possible you control to the Graveyard (save from the Extra Monster Zone) you send cards of your opponent’s to the Graveyard equal to the number you sent of your own, and then he/she takes Damage equal to THEIR cards destroyed via this effect x300.  So if you really want to deal some Damage here, you have to be willing to give up a big investment of your own.

Obviously a powerful card, but you don’t burn for everything anymore, and it still has some places I’m sure we’ll see, and all kinds of combo potential.  But it isn’t mass released yet, so we’ll wait for that.  Finally, this card returns to the bottom of its owners respective Deck when it leaves the Field (if it was Special Summoned) which is cool, too, cause it doesn’t allow itself to be used/reused/abused easily.

Now, moving along, I want to quickly touch on some notable changes between the OCG/TCG lists.  Fairy Tale-Snow is Banned in the TCG but Semi-Limited in the OCG.  And I know things don’t always play the same across the two game platforms, but it’s still noteworthy at present.  Knightmare Goblin found a Ban in the OCG after already having been Banned in the TCG as well. 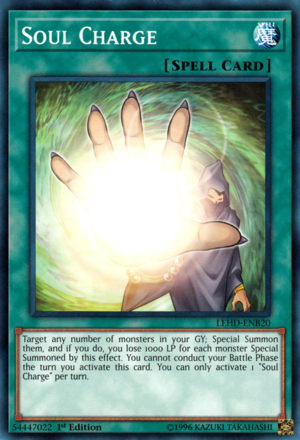 Soul Charge went Banned in the TCG but can still be used in Limited status in the OCG.  Cyber Stein also came back to the TCG at 1 in this Format, which is an interesting move.  I think giving up 5000 Lifepoints for a Fusion in this world is just too costly, given the crazy speed of Yugioh these days, and how it only seems to get faster with each passing Format, but it’s fun to have back.

Anyway, those are the few changes and notes I wanted to throw out there!  Thanks for reading, I hope you enjoyed it.  As always, if there’s anything you like to discuss or need to contact me about, feel free to e-mail me @ tsearcy@lssu.edu