I mean, who doesn’t love space bears? Hello Pojo Readers, Crunch$G here to tell you about the latest Deck Building Set to release to the TCG: Ancient Guardians. As always, we get three new archetypes and 15 Collector’s Rares in the set. For players who always wanted a graveyard-reliant Reptile archetype, we have the Ogdoadic archetype swarming from the grave. Musical fans and Pendulum enthusiast both can enjoy the Solfachord archetype and controlling your scales and notes. Finally, we get bears in space with the new Ursarctic archetype to protect the Big Dipper. With three new archetypes, we got to break down all the new support, and of course learn the Collector’s Rares in this set. So with all that out of the way, let’s get down to business. and then force both players to discard a card, also it has the same recovery effect in the grave as Folgos. Keurse, the Ogdoadic Light is a Level 8 LIGHT who can Special Summon itself from the graveyard by tributing a monster, then the opponent can Special Summon a monster from their grave with its effects negated, also upon this card being Special Summoned you can revive a Level 4 or lower Ogdoadic, but it’s banished when it leaves the field. Aleirtt, the Ogdoadic Dark is a Level 8 DARK who can also Special Summon itself from the grave by tributing a monster, then the opponent can add a monster from their graveyard to the hand, and upon this monster being Special Summoned can let you return 2 of your banished monsters, you revive a LIGHT/DARK Reptile that isn’t another Amunessia if a card is sent from the opponent’s hand or Deck to the grave. Ogdoabyss, the Ogdoadic Overlord is a Level 10 LIGHT who can Special Summon itself from the grave by tributing 3 monsters, and as a Quick Effect once while it’s face-up on the field, you can send all monsters on the field to the graveyard that weren’t Special Summoned from the grave. Ogdoadic Water Lily is a Normal Spell that lets you send any Reptile from the Deck to the grave, then it can let you revive any Reptile if you have 5 or more Reptile monsters with different names in your graveyard. Ogdoadic Origin is a Field Spell that can send a card the opponent controls to the grave if your Reptile is destroyed by battle or the opponent’s card effect, also if this card in the Field Zone is destroyed by an opponent’s card, you can make the opponent send the top cards of their Deck to the grave equal to the number of Reptiles with different names in your graveyard. Ogdoadic Hollow is a Continuous Trap that during the Main Phase can let you tribute a Reptile Effect Monster to target a monster in the opponent’s graveyard and Special Summon it, but it’s sent to the graveyard at the end of the turn, also upon this card being sent to the grave, you have to send all face-up non-Reptile monsters you control to the graveyard. Finally, Ogdoadic Calling is a Normal Trap that can let you Special Summon 2 Ogdoadic Tokens (Reptile/DARK/Level 2/ATK 0/DEF 0), or if you have 8 or more Ogdoadic monsters with different names in your graveyard, you can instead Special Summon 2 Reptile monsters with different names from your graveyard.

Do Re Mi Fa Sol La Ti Do Now we can get into the musical-based Solfachord archetype. This archetype is full of Fairy Pendulums each with a different Level and Scale that all add up to 9, and also rely on having even and odd Pendulum Scales for effects. Also, it should be noted the Level 1-4 Solfachords prevent your Pendulum Summons of Solfachords from being negated and the Level 5-8 Solfachords prevent the opponent from activating Spell/Trap cards or monster effects when your Solfachords are Pendulum Summoned. Now with the basic stuff out of the way, to the monsters themselves. DoSolfachord Cutia is Level 1 Scale 8 who boosts your Solfachord Pendulum monsters by their Scale x100 if you control an even Pendulum Scale and upon being summoned that’s 2 higher or lower than the tributed monster, except another Angelia. TiSolfachord Beautia is a Level 7 Scale 2 with a Quick Effect to target an Effect Monster the opponent controls, or a face-up Spell/Trap they control if you have an even scale, and banish it if it leaves the field this turn, and also once per turn when this monster battles an opponent’s monster whose ATK is equal to or higher than your highest Pendulum Scale x300, that opponent’s monster is destroyed. DoSolfachord Coolia is a Level 8 Scale 1 who can be Special Summoned from the hand by tributing 2 Pendulum Monsters, can target a face-up card the opponent controls, or up to 2 if you have an odd Space Bears of the Polar Star Finally, we get to the space bears, being the Ursarctic archetype. This archetype is full of WATER Beast and Beast-Warrior monsters and is based on summoning Synchros by subtracting Levels instead of adding them. Therefore we got Level 7 non-Tuner Beasts, the Mik- forms of the Ursarctics, as well as Level 8 Tuner Beast-Warriors, the Mega-forms of the Ursarctics. All of this to summon a Level 1 Synchro and then use that alongside Level 8 Tuners to summon the Level 7 Synchros. They all also have a Quick Effect to Special Summon themselves from the hand by tributing another Level 7 or higher monster from the hand, with the downside being you can only summon monsters with a Level that turn. Ursarctic Mikpolar on Special Summon can let you add a 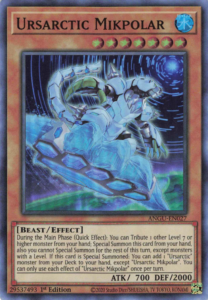 and lets you add an Ursarctic monster from Deck to hand if the opponent Special Summons, except during the Damage Step. Ursarctic Grand Chariot is another Level 7 WATER Beast-Warrior Synchro with the same summoning condition as Septentrion, upon summon can target up to 2 other cards on the field and destroy them, and can tribute a Level 7 or higher monster from the hand or field as a Quick Effect to negate the activation of a card or effect that would target an Ursarctic card you control. Ursarctic Departure is a Normal Spell that can let you discard a card to add 2 Ursarcitc monsters with different names from the Deck to the hand, and can be banished from the graveyard instead of tribtuing a monster for an Ursarctic monster’s effect, except during remove all counters from itself (min. 7) if a monster is Special Summoned while an Ursarctic Synchro is on the field to let you take control of an opponent’s monster. Finally, Ursarctic Quint Charge is a Continuous Trap that can let you pay 700 LP to either add an Ursarctic monster from the grave to the hand or tribute 2 Ursarctic monsters, even if face-down, to Special Summon from the Extra Deck an Ursarctic Synchro with a Level equal to the difference between the two tributed monsters’ Levels, plus when your Ursarctic Synchro is destroyed by an opponent’s attack, you can make the opponent shuffle cards into the Deck until the combined total of cards in their hand, field, and graveyard equals 7. Now for the reprints, broken down by cards related to certain archetypes and then generic cards. For Ogdoadic reprints, you get a bunch of Reptile goodstuff with reprints for Vennominon the King of Poisonous Snakes, Vennominaga the Deity of Poisonous Snakes, Evil Dragon Ananta, Lightserpent, King of the Feral Imps, Snake Rain, Viper’s Rebirth, Damage = Reptile, Rise of the Snake Deity, and Offering to the Snake Deity. For your Solfachord reprints, you get Pendulum goodstuff with Luster Pendulum, the Dracoslayer, Dinoster Power, the Mighty Dracoslayer, Ignister Prominence, the Blasting Dracoslayer, Majester Paladin, the Ascending Dracoslayer, Pot of Riches, Wavering Eyes, and Igknight Reload. Finally for Ursarctic reprints, you only got one card dedicated specifically to the archetype with Ayers Rock Sunrise. Trade-In is also in here, arguably for either the Ogdoadic archetype or Ursarctic archetype. Other generic reprints include Skull Meister and Dinowrestler Pankratops, mainly to make Collector’s Rares.

First off, I’ll mention I do like this set and the archetypes. Ogdoadic is something I wanted to see for a long time to finally see Snake Rain get a good use. Solfachords are a nice piece of Pendulum love, and finally some Pendulums that aren’t Spellcasters. Also, space bears are just cool, so I like Ursarctic. With that said, I don’t see much of an impact from this set beyond a casual level. Ogdoadic might be experimented with for some cool ideas and might have some potential. Solfachords seem like one of the weaker Pendulum archetypes we’ve ever received, sadly, even if the gimmick is cool. Also, while Ursarctic is very cool and unique with what it does, problem is the Deck is very resource costly to do what it does. The reprints are about as you expected, though I would of liked if more of them were Collector’s Rares than what we actually got. Dinowrestler Pankratops and Skull Meister are cool, but they aren’t enough and they probably still could of made better choices for generic cards. It’s a set I like, but sadly it could end up being one we forget about after a while, which is sad.