We all could use a little change every once in a while. Hello Pojo Readers, Crunch$G back here to tell you what you need to know about the 2019 Gold Sarcophagus Mega Tins. Now for the most part, we have reprints in the Mega Packs as you’d expect along with some Promos as reprints and new TCG cards, but this Mega Tin was different as the cards inside the Mega Packs this year came in different rarities from what they were originally released in (excluding commons because then you’d have more cards Rare or higher than you did common), so I thought I’d break down the Promos, especially the new ones, the Mega Packs and their rarity changes, and what cards from previous sets missed the cut in this year’s Mega Tins. Without further ado, let’s get right into it. Set 3 (1 out of 3 in every Promo Pack): Dimension Shifter, Nibiru, the Primal Being, and Dark Ruler No More 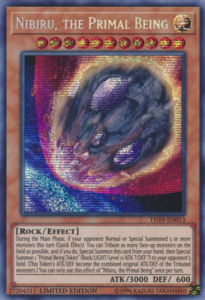 got, all of which are artworks drawn by Kazuki Takahashi himself. The second batch of 5 cards make for good reprints considering how long it’s been since the Kazuki Takahashi art of The Winged Dragon of Ra and Obelisk the Tormentor have been printed worldwide, and Slifer the Sky Dragon gets its first worldwide printing in the Kazuki Takahashi art, but beyond those two you also got very handy reprints with Monster Reborn and Raigeki, the latter getting one of its first real budget printings. The third set of 3 cards are the more competitive cards out of all the new promos, as they are build to counter popular meta strategies that involve graveyard dumping, board building, and fields full of negations on monsters. Overall you got something for collectors and competitive players alone in the promo packs.

Now to talk about the Mega Packs. This year, instead of doing 4 main sets from the last year, we instead got 3 main sets (Flames of Destruction, Cybernetic Horizon, and Soul Fusion) from 2018 and the Dark Saviors side set for the reprints in this pack, meaning Savage Strike missed the bill. In exchange, the Mega Packs change the rarities of a lot of cards around as well as having Prismatic Secret Rares instead of regular ones. Mostly everything changed rarity except the fact a lot of commons stayed common, so I’ll give a list of everything and mention the previous rarity. 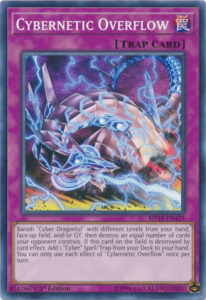 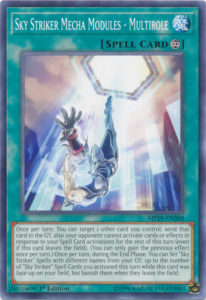 Nothing too special in the commons. There are a few cards that deserved rarity upgrades like some of the Salamangreats, Cybernetic Overflow, Crusadia Spatha, etc. but for the most part everything thing here that is common deserves it. The stuff from Dark Saviors is nice to make the cards easier to get, and for Mayhem Fur Hire to not be Short Printed in here, so that’s a benefit as well, though nothing was that hard to get out of Dark Saviors in the commons here besides Mayhem Fur Hire like I mentioned. Super Team Buddy Force Unite! took a massive fall from Secret Rare, but it is kinda warranted as it isn’t that useful right now. Nothing from Dark Saviors is Rare in this set, and that’s fine. I feel anything previously Common feels like a wasted Rare slot considering going from Common to Rare isn’t the biggest rarity upgrade, you’d prefer to get an upgrade to a holo. Network Trap Hole is a Rare card in here with a lot of potential, and it was previously an Ultra Rare. The Cyberse monsters got downgraded from Ultra Rares, which is fine. A lot of Super Rares going to Rare is perfectly fine since some of them didn’t deserve a rarity upgrade that much. Celestial Observatory might be the best Rare in here. Some of the Noble Knights could of gotten rarity upgrades though since some of their other cards did. Some Summer Summoner is a good Rare, but could of been worthy of a holo upgrade instead you could argue. Realm of Danger! should of just originally been a Rare, but at least it is here. Overall the Rares were well done, just the upgrades from Common were pointless. 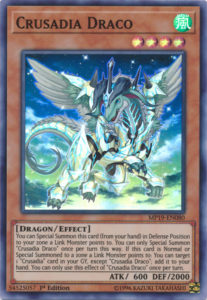 Now Duelittle Chimera might seem odd in here since it was from Extreme Force, but with them making Greatfly a Super Rare as well, they might as well have thrown it in just to make all the Attribute Links in the Super Rare foiling. I feel some of the Ultra Rares going to Super Rares does feel a little pointless considering it’s mostly only the name foiling as a difference, but I’ll accept them more than I will upgrading Commons to Rares. World Lance and World Crown getting Super Rares makes me wish World Wand did as well, though World Crown deserved it. Bella Madonna could of went to Common, but I guess it’s a good boss in Trickstars. Executor and Dawn Dragster are nice foil upgrades for Vendread players and for players that need a good generic Level 7 Synchro like Dawn Dragster. Aboria and Draco are well deserving of being foil, though again I wish Leonis got a foil as well, along with Spatha and Regulex. The Impcantations deserved foiling since they were printed. Herz and Revsystem being Super Rares makes them easier to get along with keeping their higher rarities with more value. Cyberse Witch could of been something else, but it isn’t the worst thing. Cross Breed probably has the least business being upgraded to Super Rare. Thunder Dragon Fusion is a nice reprint. The D/D/D Fusions getting upgraded is nice for D/D players, though only Genghis deserved it I feel. Finally Afterburners! could of probaby went to common since Hero’s Revenge had it as an Ultra Rare (of which you get 4 per pack, so they’re easier to get than this will be). First all, most of the Knightmares getting the Ultra Rare printing is nice to make Unicorn, Gryphon, and Iblee cheaper while also making Phoenix and Cerberus higher rarity (though Prismatic Secret would of been nice for them). Topologic Trisbaena and especially Vampire Sucker were good reprints as well. Reclusia getting a better upgrade then the previous two is well deserved for it. Borrelsword needs more reprints and this is a step in the right direction. Reproducus feels a little late. The Danger! monsters chosen are good choices, though Dogman! is probably the only one that could of went lower instead of higher in rarity. Pankratops didn’t really need another foil print after Hero’s Revenge, but the option is there now. Dragonduo deserved a small rarity bump while Titan and Colossus just could of used reprints here. Herald of the Abyss has potential as well. Trap Trick got a necessary reprint here. They also picked some of the most valuable cards from Dark Saviors to be reprinted as Ultra Rares, even though Engage! and Widow Anchor were in Hero’s Revenge. First off, Multifaker is a nice upgrade, though a little late now it’s at one. Iron Dragon Tiamaton is a great Prismatic Secret Rare to have due to its high potential. Knightmare Mermaid was most certainly deserving of the highest upgrade of all the Knightmares. Succession deserves the upgrade as well. Sekka’s Light, Called by the Grave, and Red Reboot are some of the better Prismatic Secret Rares I feel longterm. The three Crusadias are great choices, though arguably I’d trade Maximus for Draco or Reclusia. Mana Dragon Zirnitron probably looks nice at least and will be good in the future maybe. Cyber Dragon Sieger and Galaxy-Eyes Solflare Dragon deserve the rarity bumps for their respective decks. All the Sky Striker Links deserved the Prismatic Secret Rare printing, though Raye didn’t need it after being Secret Rare in Hero’s Revenge. They picked the good Danger! monsters that weren’t already in Secret Rare to get the Prismatic treatment. Foxy and Heatleo deserved foil printings, even though they’re the only Salamangreats in here that got it. The three main Thunder Dragons were worthy of the upgrade. Finally the Noble Knights cards are pretty nice Prismatic Secrets to satisfy casual players mostly, though other Noble Knight cards could of maybe warranted this upgrade as well.

Now for the sad part, the cards from the four sets that were not in the Mega Tins. Some cards might be fine for probably not getting high in value for a while or potentially getting more reprints down the line, but others are most certainly unknown and they can be troublesome for not being in here. I won’t mention Dark Saviors’ reprints since those cards are reprinted plentiful already and didn’t need to be in here as well. For the most part, they didn’t miss too much. There were some things missed that did deserve a rarity boost like Defrag Dragon, though. The Elementsaber archetype being missed raises their future value, especially the foils. Batteryman Solar would of been a nice foil. Ghost Belle will be in Duel Devastator. Knightmare Goblin will be a problem if it gets unbanned ever. Zenmaintenance will sting for Wind-Up support in the future. Impermanence had a reprint, but it could of used another. The Ruin/Demise archetype might be fine since it was all commons and rares. Mekk-Knight of the Morning Star is a pretty big exclusion. Ledger of Legerdemain is another big exclusion somewhat. Pinpoint Landing and Danger! Zone wouldn’t of hurt to be reprinted in low rarity since they are solid, but not the complete end of the world they were missed. Orcust is fine since most the cards are cheap anyways. Chaos Dragon Levianeer is a big miss since it’s a very valuable card and now we don’t know when it’ll get reprinted. Condemned Witch is similar to Levianeer, only minus the valuable part, but it could eventually gain value. For them to reprint most the new Gravekeeper’s cards, them missing Necrovalley Throne is kinda big. Finally Extra-Foolish Burial could of been a nice reprint for future potential, but not the biggest deal it didn’t get one here.

The set isn’t perfect, but it’s very well done. A lot of cards got the upgrades that they deserved and some cards were downgraded in rarity while also becoming easier to obtain while keeping their higher rarities more valuable. There were some misses on what didn’t get a rarity upgrade and some cards that got the rarity upgrade when they probably warranted a downgrade more. The bigger part is probably what wasn’t in this set, but most of those cards missed we could live without for now. Overall the promos are really good, expensive cards became much easier to get, and there’s rarity upgrades for a lot of cards that really deserved them. Plus the Prismatic Secret Rares look nice. Overall these tins are worth getting this year, just hope they don’t hit some of these cards on the banlist too hard very soon.