I dreamed I saw Joe Hill last night . . . and he won a bunch of games at FNM. I wouldn’t be surprised if this guy ended up winning games well beyond that, in fact, considering how many bonuses he provides on entering and leaving, and how much versatility he has with his blitz ability. It lets you trigger both of them in one turn, as anyone can read; and I haven’t mentioned this much of late with blitz and similar abilities, but we should note how well they play with flicker effects. It means you also have a built-in way to get him into your graveyard and reanimate him, copy him with Lukka’s Strixhaven card, and so forth. They clearly intended for the Warchief to be strong, and he is.

This looks an awful lot like Thragtusk, doesn’t it? Workshop Warchief is in the same space as everyone’s favorite obnoxious Beast, even coming in with largely the same stat line. The differences are appreciable: the Warchief is a bit more green-heavy in its cost, you can blitz it in if you have the time to spare and the desire to smash, it gains you less life, and it leaves behind a bigger body…on a death trigger, not a “leaves play” trigger. Part of what made Thragtusk so sublimely suffocating was how it interacted with blink and bounce spells in its Standard environment, and they wisely kept out Rhino Warrior from doing the same thing.

I’ll say that the pros of Workshop Warrior over Thragtusk, versus the cons, are largely a wash, as you’re apt to be playing them in the same spaces but rarely alongside one another. I think this is probably a slight bit better pound-for-pound, but Thragtusk was far more abusable. Still, being solidly comparable to what’s considered one of the best green creatures in recent memory is a pretty solid starting point, and I suspect this will be excellent overall in Standard.

Constructed: 4.5
Casual: 4.75
Limited: 5 (this strikes me as a massive bomb)
Multiplayer: 3.5
Commander [EDH]: 4 (a slight upgrade over Thragtusk as a fair creature, but a downgrade as a combo piece)

Thragtusk 2.0 is here!  Great card and really well designed with almost all upsides.  A 5/3 for five trample is great but you gain three life when it enters the battlefield is just a nice touch of sprinkles of top of this sundae of a card.  You even get value after it dies which is fantastic for only five mana!  I don’t think you’d play this for the blitz ability, it costs a bit too much and it’s worth it to keep on the battlefield despite being in Bolt range.  Great addition in green if you’re playing limited, as for commander I think there are better options for such precious real estate but it could find a home in the right strategy. 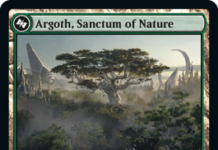