El Segundo, Calif. (November 6, 2019) – Fans of the Yu-Gi-Oh! TRADING CARD GAME (TCG) are invited back into the vault! For the third year running, Konami Digital Entertainment Inc.’s (KONAMI) Lost Art Promotion is set to offer treasures most Duelists never thought they’d have a chance to own, starting January 2020 at participating KONAMI Official Tournament Stores. Duelists across the globe cast their votes for their favorite cards, and now the results are in!

Over the course of six months, Duelists can collect six different Lost Art Promotional cards only at participating Official Tournament Stores (OTS). Each of the six cards will be available for one month during the promotion, and all six cards feature artwork that has never been available before outside of Asia. While supplies last, you can receive a free Lost Art Promotional card when you spend at least $30 (excluding sales tax) on sealed Yu-Gi-Oh! TCG products at participating OTS locations.

The Lost Art Promotion 2020 will run in two 3-month periods: first in January, February and March, and then June, July and August. During these qualifying periods, purchasing sealed Yu-Gi-Oh! TCG products from participating OTS will make customers eligible to receive a Lost Art Promotional card. Don’t miss out, because supplies are limited and this year’s Lost Art collection may be the most competitive one yet.

One of the all-time most-requested picks finally arrives as Duelists cross Foolish Burial off their want lists! Fresh off the Forbidden List, Super Rejuvenation appears in the TCG with real dinosaur damage for the first-time ever! Edge Imp Sabers is unleashed in all its steely glory, and Offerings to the Doomed is back in full color! Super Dreadnought Rail Cannon Gustav MAX is locked and loaded, and one of the most iconic Trap Cards ever is finally given its celestial due in Solemn Judgment!

The Lost Art Promotion 2020 is a once-in-a-lifetime opportunity for Duelists to collect iconic cards from the Yu-Gi-Oh! manga and animated series with all the illustrations they’ve been waiting for. From competitive must-haves like Foolish Burial and Solemn Judgment, to fan-favorites like Super Rejuvenation and Superdreadnought Rail Cannon Gustav MAX, the latest cards in the Lost Art line are timeless classics that are sure to be a hit with competitors and collectors alike. Remember, the Lost Art Promotion cards are available only at participating OTS while supplies last! 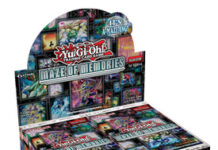