Tribes: Dawn of Humanity is a new board game from Kosmos games.  Tribes is for 2-4 Players, Ages 10 & Up.  Play time is about 45 minutes.  Tribes mixes together several fun aspects from other games, like: Worker Placement; Terrain Building; Resource Management; and Dynamic/Shifting Action Tiles.

I playtested this game at the Kosmos booth at GenCon in 2019 and enjoyed it.  Now I have it, and finally got a chance to play some games with my gaming group.

Tribes Game Description from the Back of the Box:

“The Dawn of Humanity. Experience 30,000 years of civilisation in 45 minutes! Players must lead their tribes in short, fast turns through the early history of humanity, discovering agriculture and taking their tribe through to the Bronze Age. The tribes must settle unknown lands and use their valuable resources in order to discover the new inventions and tools they will need to progress.

Each turn, players will select an action from the shifting action display: moving, exploring or growing as needed. Players will start with a small tribe at first, but through these actions will grow and become more powerful as they set out to discover new lands and the valuable resources they provide.

Who will best prepare their tribe against the events such as natural disasters, predators and more? Who will forge a path forward and lead their tribe to victory?”

What’s in the Box

There are a lot of components in this game:

How to play Tribes: Dawn of Humanity

Tribes has a lot of pieces, and a detailed Rulebook, but it is actually fairly simple to learn and play.  This is because each player’s turn is easy to play (like most other Worker Placement Games):

Your action tile choices are:

Each player starts the game with 3 different land tiles. The tiles are: Goats; Horses; Wheat; Gold; Incense.  Incense is a weird resource for a board game, and in this case it is used for religious rituals: like Mysticism.

Over the course of the game, players will:

Points are scored on the Game Board.  Each player has their own little plot of land, but the game board is used and shared by all players.  Players first complete Achievements on the bottom of the board.  Players then work their “marking stones” up from the bottom to the top in order to score points. The bottom age represents Paleolithic epoch.  The middle section represents the Neolithic epoch.  And the top section represents the Bronze Age.  A player can thus, during the course of the game, earn points by using their Gold to learn: Jewelry making in the first epoch; then Smelting in the second epoch; and then make Currency in the third epoch.

The middle and upper epoch tiles are hidden from view until someone learns the skill on the level below it.  Then those tiles are flipped over.  This can be seen on the game board photo above.

As you can see from the board image above, there are only 4 choices on each row/epoch, even though there are 5 resources.  One resource Achievement is randomly removed from each epoch level – every game – to give the game some variety for replayability.

As players learn trades (achievements), they earn points, and their tribes also become more powerful.  Over the course of the game, during your single turn: you will be able to make more babies; or draw additional land tiles; or move further on your land tiles with your tribe members.

During the course of the game, Additional Random “Action Tiles” can be triggered, and mixed in with Starting Action Tiles.  Some of these random tiles are good, and some are bad.  You might kill a Giant Beaver and score 2 Victory Points.  Or some of your tribe members might get eaten by a Saber-toothed Tiger.  Each player is given 5 shell tokens to start the game.  A player can skip action tiles (from left to right) in order to take the action they want by placing shells on top of action tiles the don’t want.  If a player takes an action with shell tiles on it, they get to claim all those shells.  Example: Most players will not want to lose tribe members to a saber-toothed tiger, so they will pay shells to skip it, but eventually, someone will not have any shells to skip it.  Someone will eventually have to choose the Sabre-toothed Tiger Action Tiles.  So that play will lose some tribe members, but they will also get shells to use in the future to get good stuff, or avoid bad stuff.

And … like most other games … the player that scores the most points wins.

The game play is fun!  The game doesn’t break  any new ground in game play design, but it’s still very enjoyable to play.  The games are competitive, and players don’t generally know who is winning until the end of the game.  You never feel like “Gah, I can’t win this game!”.  This game is fun to play to completion.

The game is not really too difficult to learn.  My explanation of gameplay may sound muddy, but the game is straightforward.  I highly recommend watching a “How to play Tribes: Dawn of Humanity” video on YouTube to see how the game is played.  Then you can glance at the rules during gameplay is anything is still confusing.  The rulebook is: very well done; n full color; has lots of pictures; and simple to read.

I like the Action Tile mechanism.  It is very similar to picking new tribes in the board game “Smallworld”, and it works great here.  I like how the game board will trigger in the addition of random tiles to the Action Tile sequence, and that those random tiles can be good or bad.

I like that each player has their own land tiles to harvest.  You don’t build a huge kingdom, but your kingdom will most likely be different than the other players’ kingdoms.

Game play on the game board is interesting as well.  You might have a lot of goar tiles in your kingdom, so you may focus early on Hunting, Cheese Making and Weaving.

The game can be played quickly, but the first play through will generally be slow for everyone to learn the rules.  There is not much downtime between turns, which is nice.  Analysis Paralysis doesn’t really happen here, because your choices are limited by the Action Tiles and how many shells you can possibly use.

The components are great.  You get solid wooden meeples and cubes.  The game board and tiles are also printed on heavy card stock.

I like the artwork on the tiles and the gameboard.  The game has a nice throwback feel. 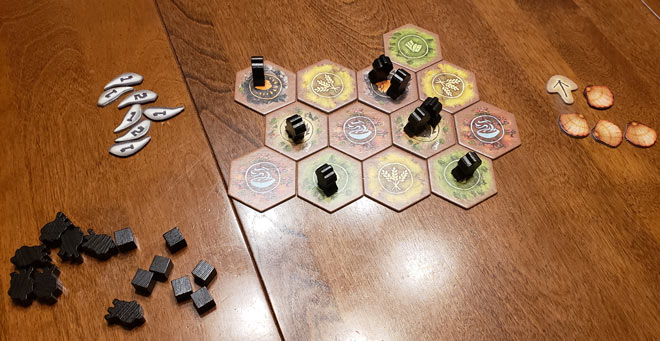 Bad Luck.  This game can have a small amount of bad luck.  When you “Explore” the tile bag, you may draw tiles you don’t want.  And those resources might not show up on the Epoch levels you are hoping to “Achieve”.  So you could fall behind other players who have gotten luckier during their Explore actions.  I wouldn’t say this is a major complaint, but it certainly can happen.

You could also get stuck with some bad Action Tiles.  Your tribes may get eaten by wild animals.  You may lose tribes to disease and famine.  You may lose land to droughts.  This generally won’t happen to the same player over and over, but one player may feel the wrath of the gods more than others.

The box is nothing special.  There is no cool insert in here to stack and access pieces.  You basically get a hollow box with plastic bags to store everything.  The game does all fits back into the back at least.

Overall, this is a very fun game with a good amount of replayability.  My gaming groups have all enjoyed themselves, and all said they would definitely play again.  There is a good amount of planning, decision-making and strategy … with a side of luck tossed in.

My daughter’s love to play the Sid Meier’s “Civilization” PC games, and they say this board game gives them a nice “Civ” feeling, and they like that.

This is a good medium weight game and a good step up from from simpler family games.  The game plays well with varying player counts.  Tribes is just as good with 2 players as it is with 4 players.  This game will definitely stay in my collection.

And, the price is reasonable for this game, based on the amount and quality of components inside.