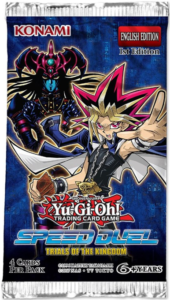 Everybody gets a new Skill… well almost. Hello Pojo Readers, Crunch$G back to talk about the latest Speed Dueling expansion and the last one of 2019, Trials of the Kingdom. This set is focused on giving as much support as possible, considering there are 5 Skills for different characters. We also got one of the most iconic Ritual Monsters used by Yugi in the game joining the Speed Dueling format. As always, we got some good staples and some good cards to either boost current strategies or create new ones for the Speed Dueling environment, so let’s see the new additions to this format. 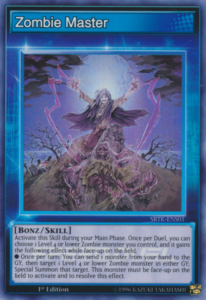 Not the monster as you might expect, but instead we got Bonz’s new Skill card, Zombie Master. This Skill can only be activated during the Main Phase and it’s a once per duel Skill where it gives a Level 4 or lower Zombie you control the effect that “Once per turn: You can send 1 monster from your hand to the GY, then target 1 Level 4 or lower Zombie monster in either GY; Special Summon that target. This monster must be face-up on the field to activate and to resolve this effect.” So basically it takes any other Zombie in the game and gives it the effect of Zombie Master. I guess this is a good way for Zombie decks to build up board presence in this format considering it seems the format won’t get the actual Zombie Master anytime soon if at all. I’d say it’s a worthwhile Skill for Zombies considering Zombie Master would be pretty good for Zombie decks.

Terror from the Deep! 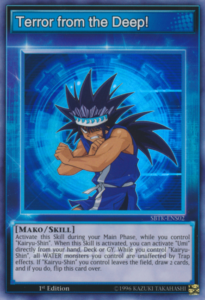 The next Skill involves Mako and his card, Kairyu-Shin as the Skill can only be activated during the Main Phase while you control your Kairyu-Shin. When activated, you can activate Umi directly from your hand, deck, or graveyard and while you control Kairyu-Shin, all WATER monsters you control are unaffected by Traps. If Kairyu-Shin leaves the field, you draw 2 cards and flip the Skill card back over. It’s a pretty good Skill minus the fact you have to use a very lackluster Level 5 vanilla monster. Protection from Traps does seem good in this format where I can’t really think of many good Spells that counter monsters right now, plus it gets you Umi (or The Legendary Ocean) directly from your deck with ease. The draw 2 will be nice for when your Kairyu-Shin is eventually destroyed, makes up for the tribute you might of used to summon it. It’s a Skill that makes a weak vanilla monster useful, so it probably would make for a fun casual strategy. 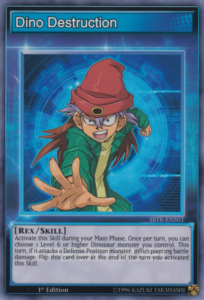 Rex’s new Skill is Dino Destruction, which can be activated during the Main Phase once per turn to give a Level 6 or higher Dinosaur monster you control the ability to do piercing damage during that turn. Neat little way to let your big dinos get over an opponent’s defensive wall. There isn’t too much to this Skill, it would only be useful in decks with high-level Dinosaurs, though. I do wish it included Level 5 as well since they also need 1 tribute like Level 6s, but overall it is an okay Skill, though over time I’m sure you’d find better Skills for your Dinosaur decks if not just using a generic Skill. 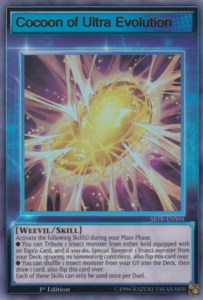 Another Skill based off an actual card and one that supports Weevil, we have Cocoon of Ultra Evolution. This Skill has two different effects that you can use once per duel each. The first effect is to tribute an Insect on the field that’s equipped with an Equip Card in order to Special Summon any Insect from your deck, ignoring the summoning conditions. This first part can be nice to potentially tribute a weak Insect, or your opponent’s monster, for a bigger Insect to do bigger damage. The second effect lets you shuffle an Insect from your graveyard into the deck and then lets you draw a card. A good way to recycle certain Insects, probably those most important to your deck, and it gives you a draw while you’re at it to increase your advantage to see a good card for you to use. It’s a pretty good Skill for Insect users. 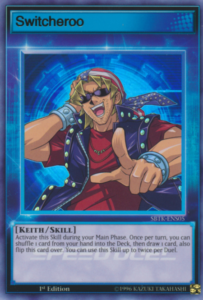 The last Skill is for Bandit Keith and is one of the strongest generic Skills for this format probably. It allows you to shuffle a card from your hand back into the deck once per turn in order to allow you to draw a new card, and this Skill can only be used twice per duel. A great way to get cards you don’t want in your hand back into the deck to hopefully see a different card that might help you out. This would be most beneficial for cards you would never want to see in your hand because of how easily you can get it out of your deck, so it replaces a potential brick into potentially a game-winning card. I can see this being one of the more common Skills in the format, especially as the card pool expands with decks that like specific cards in the deck. 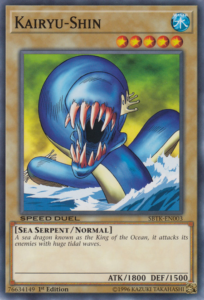 Black Magic Ritual probably makes it obvious what card is in this set. We got a fair amount of Normal Monsters in this set that are fairly weak. Kairyu-Shin is only useful with the Skill. Girochin Kugwagata could be a decent Normal Summon for Insect decks with it’s 1700 ATK, and Metal Armored Bug might be a good Cocoon of Ultra Evolution target that would technically be less bricky than Perfectly Ultimate Great Moth. Cyber Raider might make for a decent option to mess with your or your opponent’s equip cards. Patrician of Darkness is pretty good for being able to control what monsters your opponent attacks. Maryokutai can negate your opponent’s Spells during their turn, though it would have to be the first Spell they use. Sasuke Samurai can easily destroy your opponent’s set monsters without flipping them face-up, though it is on a monster that is 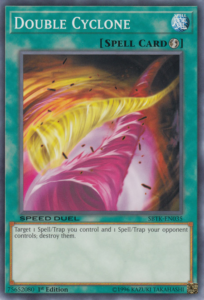 fairly weak. Helping Robo for Combat has enough attack to make use of the effect of swapping a card from your hand into the deck to draw a new card. Blood Sucker would be an ok option for a deck-out deck since it just needs to do damage to send the top card of the opponent’s deck to the graveyard, though there will likely be much better options. Black Ptera makes for ok tribute fodder since it goes back to the hand when it goes from the field to the graveyard in any way that isn’t battle destruction. Flint Lock can be useful for messing around with Flint in order to lock your opponent’s monster from position changing and attacking. Share the Pain could make for a pretty good card against your opponent’s strong monsters, even though you have to sacrifice your own monster to do so. Tail Swipe could be used with your high-level dinos to help bounce back your opponent’s weaker monsters so you can get a direct shot of damage in. Double Cyclone could be great for destroying your Spells/Traps you want destroyed while also destroying an opponent’s Spell or Trap. Iron Draw could make for great draw power in Machine decks. Tutan Mask could make for an ok option as targeting protection for your Zombies. Assault on GHQ could make for a strong Trap in deck-out strategies. Finally, Waking the Dragon could make for good bait against the opponent to let you summon a strong monster from your deck or Extra Deck. 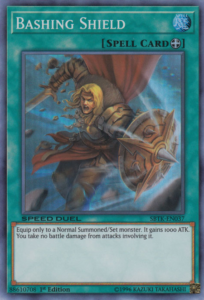 Golden Ladybug will make for a good option in decks that would want to keep you gaining life points, though there isn’t really much of a way to make use of it in decks right now. Jurrac Stauriko is a great card that replaces itself with 2 Tokens when destroyed in battle, though those Tokens can really only be used to summon bigger Jurrac monsters. Jurrac Herra is a fairly big Dinosaur that can come out with great ease from the hand or graveyard just by having a Defense Position Jurrac be destroyed in battle. Surface is a great card to revive low-level Fishes, Sea Serpents, or Aqua monsters for good tribute fodder. Finally Bashing Shield makes for one of the best generic equips in the format since it boosts a monster by 1000 ATK and prevents you from taking damage from battles involving the equipped monster. 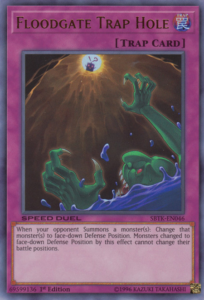 Magician of Black Chaos is basically now the best high-level Ritual in the format since it’s only competition are Super War-Lion and Fortress Whale, though Relinquished is easily a better Ritual in general. Don Zaloog is a great card for either hand destruction decks or deck-out decks. The Legendary Fisherman II is easily superior compared to The Legendary Fisherman in nearly every aspect. Parasite Paranoid is a great card to equip to an opponent’s monster to turn into an Insect, prevent it from attacking your Insects, and prevent it from targeting your Insects for effects while at the same time replacing itself by summoning a high-level Insect from your hand when it leaves the field while equipped. Time Machine can give a monster a second chance basically by reviving it in the same position it was in if it was destroyed by battle and sent to the graveyard. Haunted Shrine is a good card to help you revive your Zombie monsters twice with one card. Finally, Floodgate Trap Hole will make for a great staple against big monsters since it flips them face-down in Defense Position and makes sure it can’t move from that position while on the field.

There are some good cards to help boost strategies in this set as well as some cards to help bring strategies to life. Jurracs could use more cards in this format before they’re viable. There’s some pretty good Insect and Zombie cards in here. You got good generic cards like Floodgate Trap Hole and Switcheroo. WATER decks get a great boost overall with Surface and The Legendary Fisherman II. You got cards with high future potential like Share the Pain and Double Cyclone. Overall it is a solid set for boosting strategies in this format.