The prophecy has been fulfilled – squirrel decks in Commander finally have their ring-breaker general, and even the rest of the formats will have to keep him in mind. Why? His surprisingly high level of unstoppability means that any deck that doesn’t look like one that draws lots of cards may well turn out that it can, just by virtue of having creatures. There’s even another dimension to him, as his indestructibility and attack requirement means that you might as well give him some auras and equipment and have him wade into the shield-river himself. When you add in the card drawing, that’s literally all upside; and that’s before you add in the conceptual coolness of killing people with a supernatural squirrel who flyts with dragons.

First things first, this creature’s typeline is an easy 10/10. The second Squirrel in as many years is legendary, a reference to Norse mythology’s Ratatoskr, messenger squirrel who scampered up and down Yggdrasil. Not sure as to if there are trees for Toski to cavort on, but it’s still a neat reference.

Speaking of neat, Toski is no joke when it comes down. Its body is wee, but its strength is undeniable, as a team-wide Curiosity effect is very powerful. That it’s forced to attack is minor, as it’s indestructible and, thus, 62% harder to kill than average. While it lacks haste, note that Toski’s effect triggers even if it itself didn’t attack, and so you get a decent blocker and (maybe) a bunch of cards when it comes down.

Considering green’s strength, Toski likely has a spot as a one-of in those decks as a neat source of extra value. It’s not going to take over most games, but an uncounterable death squirrel has plenty of room to violently rearrange faces. 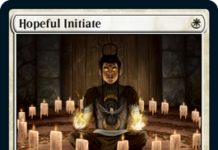 Thirst for Discovery – MTG Crimson Vow Card of the Day