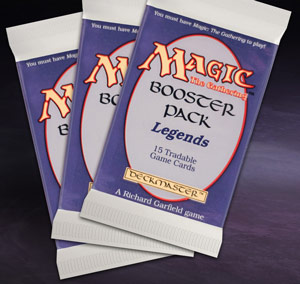 Legends came out in June 1994. That was the year Brazil won the FIFA World Cup for the fourth time, the year the Spice Girls emerged on the world stage, and the year O.J. Simpson fled in his white Ford Bronco. Legends is older than Internet Explorer, Google, and eBay. It’s older than South Park, Family Guy, and WCW Monday Nitro. It might be older than some of you who are reading this. In 1994, I hadn’t even started playing Magic yet – it would be just over a year before my grandmother gave me the Fourth Edition starter box with its booklet that promised “you will encounter new mysteries as the multiverse grows”.

And mystery was a big part of Magic back then. In 2022, you can find out many things about it just from Google – not all, but enough to get by. If you don’t know something, it’s sometimes just because the volume of cards is so large that it got lost on the internet among the more commonly-discussed topics. But in the 1990s, Magic was mysterious because there simply were no sources of information. The internet was nowhere near as ubiquitous as it is now, and it wasn’t on people’s mobile phones (and even if it had been, most people didn’t own a mobile phone). You could try and get on Usenet groups, but very few people knew how to do that, and they were nowhere near as easy to use as modern forums or social media.

So if you’re wondering why I, and other people who got into Magic at the same time, got so excited over the Chronicles version of Sivitri Scarzam, that’s why. 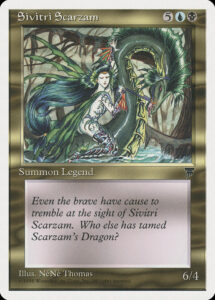 We didn’t quite have the wherewithal to express it so straightforwardly at the time, but somewhere inside, our thought process was something like: “This looks so cool! I want to look at it! I want to look at other things like it! I mean, I tried it in my deck and it wasn’t good, but if there are things this cool out there, what else must be waiting for me?” If Legends does nothing else, it proves the power of the non-gameplay elements of Magic.

Still, Legends is rough, no matter which elements of it you look at. We know that about its mechanical design, of course, but its flavor elements have a crazy story of their own. The designers knew from the start that they wanted to emphasize colorful characters and epic stories. But this was Magic’s second year, and their staff had barely expanded beyond Richard Garfield and a group of his friends and allies. There were no master lore books and not even a real storyline department, so the designers named all the legendary creatures after characters from their Dungeons and Dragons campaigns. This is why they have a range of names that stretches from Jasmine Boreal to Rohgahh of Kher Keep to Tetsuo Umezawa. 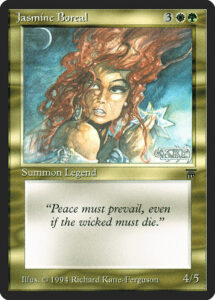 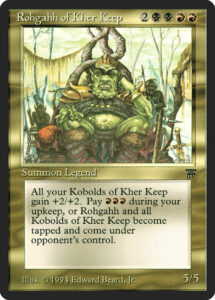 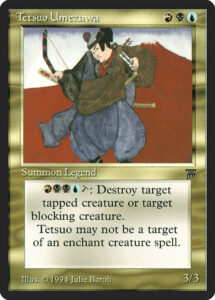 That’s why they also don’t seem to go together, at least not in the sense that we expect from modern sets. Rohgahh would be read to imply that kobolds are a feature of the world, but there are barely any in the set, and no non-kobold cards mention them. Tetsuo and Jasmine have divergent real-world inspirations from each other; even a property focused on storytelling, like D&D, would put them in different parts of the continent (at least to start with).

Similarly, the set is full of non-creature cards that seem to suggest epic confrontations, and clashes of titans and heroes; and not only do their mechanical designs not reflect their titles and concepts, they don’t make for any kind of consistent world system. Is Heaven’s Gate Serra’s Realm, or another strongly white-aligned plane, or our heaven, or something else entirely? Why in the world is Albert Einstein in the art for Presence of the Master? How did they decide that this would be the only non-core set that had real-world flavor text?

The looseness of Legends’ storyline, and its focus on characters, ended up having effects far beyond just the one set. It’s not clear whether Wizards of the Coast already knew that Legends depicts characters and places from Dominaria when they released it, but they have certainly been consistent about that since then. As early as the mid-1990s, they began releasing novels and short stories including some of the characters, in an attempt to “redeem” them from the ambivalence of being a cool card that was bad to play with. The most successful of these involved the aforementioned Tetsuo, whose trilogy of novels turned out to connect with Kamigawa’s storyline. 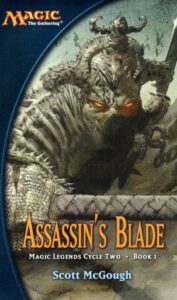 The diversity of the characters in Legends also implied that Dominaria itself must reflect that diversity, and this implication was a factor in the plane’s growth into a “kitchen sink” world over the rest of the 1990s. And that nature, in turn, has historically been a big part of Dominaria’s popularity. Wizards of the Coast has also let slip that they once saw Dominaria’s diversity as a problem in the era of sets with tight flavor themes, but when they finally revisited the world in 2018, it was a smash hit. Perhaps people are also instinctively drawn to worlds that feel big and diverse and mysterious and complex – just like our world is.

Indeed, the influence that Legends exerts on Magic’s lore and concepts far outweighs the influence of its gameplay elements. Most of its mechanically-good cards are forgotten; even The Abyss and Moat are mainly for Old School 93/94 nowadays. But if you think back to our mention of what flavor and concept elements they wanted to emphasize for Legends, then really, we’re still playing in that set now. The M10 design school of resonant cards is a refined version of what the designers attempted back then, and it successfully hooked players in the same way that the vanilla legends did. The fact that some of those very same vanilla legends are getting updated, honestly good-in-Commander versions as Dominaria United box toppers speaks to their importance to Magic’s non-gameplay elements. They established the need for cool characters which has driven almost thirty years of high-quality art, striking concepts, and even long-running stories like the Weatherlight Saga. And they’ve remained in players’ memories that whole time, despite never making an impact in the tournaments we give so much attention to. 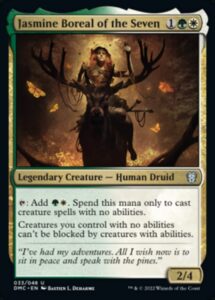 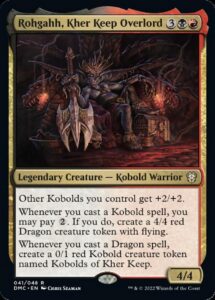 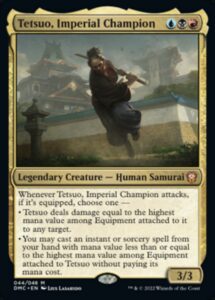 And speaking of which, Commander was originally called Elder Dragon Highlander, was built around the five legends with that typeline, and is a similarly refined version of the idea of having larger-than-life characters clash just to see what happens. In a reflection of our original reactions to multicolored legends, many Commander players don’t even care if they win as long as they get to see something cool. This is perhaps a good attitude to have nowadays, considering what a mess the competitive formats seem to become on a regular basis, and the chaos that Magic Arena unleashed on some parts of the community. Not to mention Wizards of the Coast’s tendencies to avoid capitalizing on opportunities and to avoid addressing things until they become bitter arguments or scandals. 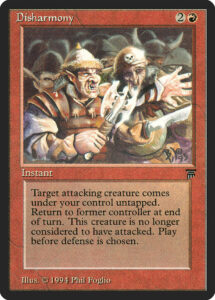 Even after all these years, then, Legends is a strange mirror for Magic itself. Now, just as then, every card has value as a piece of art or expression, but its value in gameplay is harder to predict. Now, just as then, the planes’ appeal come as much from what they make us see as from what is actually shown on the cards. Now, just as then, the full implications of what we see will not immediately be apparent – and more often than not, they will not be what Mark Rosewater and the other Wizards of the Coast people originally intended.