Many longtime players cite Time Spiral as their favorite block of . . . is it still Magic’s modern era? I suppose it’s arguably the middle years now. Seeing timeshifted cards appear in boosters, almost exactly as they had been when we were children, was a pleasant surprise and an incredible thrill. Returning to Dominaria and hearing again the names of many of our favorite characters, locations, and creatures was absolutely heartwarming, like seeing old friends. But there was also something about Time Spiral that never quite sat well with me; a curious pall that hangs over the set like dust over a crater.

That something, in case it wasn’t clear from the end of the last paragraph, was the block’s post-apocalyptic setting. Although the set’s story revolves around the quest to begin the Mending, many things that had been features of the world were nonetheless lost, possibly forever. The once-fertile savannahs of Femeref and Suq’Ata had become dust plains; the mighty Keldons fought only for survival, not honor. The seven houses of Benalia were reduced to scattered bands of refugees, and the ancient and mysterious forest of Yavimaya lay in ashes. Kor, Vec, and Dal survivors eked out a meager existence in the shadow of Volrath’s Stronghold, and only the thallids thrived in long-suffering Sarpadia.

And on top of that, the planeswalkers discovered a brutal irony: the time rifts that had resulted from their previous wars could only be sealed by a planeswalker’s spark. Freyalise, Windgrace, and Jeska died in the process; Karn and Teferi both lost the ability to planeswalk for years. If you think about it, the block was actually really depressing all around. 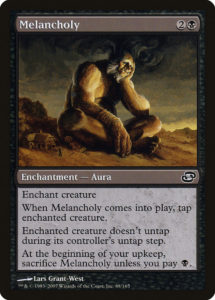 The thing is, there’s nothing that says Dominaria has to be a plane of darkness. In fact, by all rights, it should be much the opposite. It’s Magic’s “kitchen sink” setting – a huge, diverse, dynamic world which contains every biome, species, culture, and style of magic you can think of, plus the kitchen sink. And if you look closely enough, it’s got a bunch of variations on the kitchen sink, too. It’s the perfect world for high adventure, particularly in the energetic and action-heavy style that Magic can do well (when the people in charge of the story put their mind to it).

Not all of Magic’s best story moments center on Dominaria – the Kamigawa and Lorwyn novels are perennially underrated – but the style and conventions we see in Magic’s stories were established by the tales told for Dominaria-based expansions. It is the heart and soul of the Multiverse in more ways than one.

This is why the expansion Dominaria was such a joy on its release, and why it remains one now, even so long after it stopped being a part of Standard tournaments. It was clearly designed with loving attention to the characters and settings that are Magic’s own. It has the historical awareness of Time Spiral, but is a much tighter and more coherent expansion. And its visual style, like that of Time Spiral, draws on art and flavor from all across the game’s history, but is more colorful, dynamic, and alive. The stained glass aesthetic that characterizes the set’s Benalia-related cards is an instructive element: it links the cards to specific famous visuals from Urza’s Saga, is sensible for the characters it appears with, and has an immediate and striking appeal. 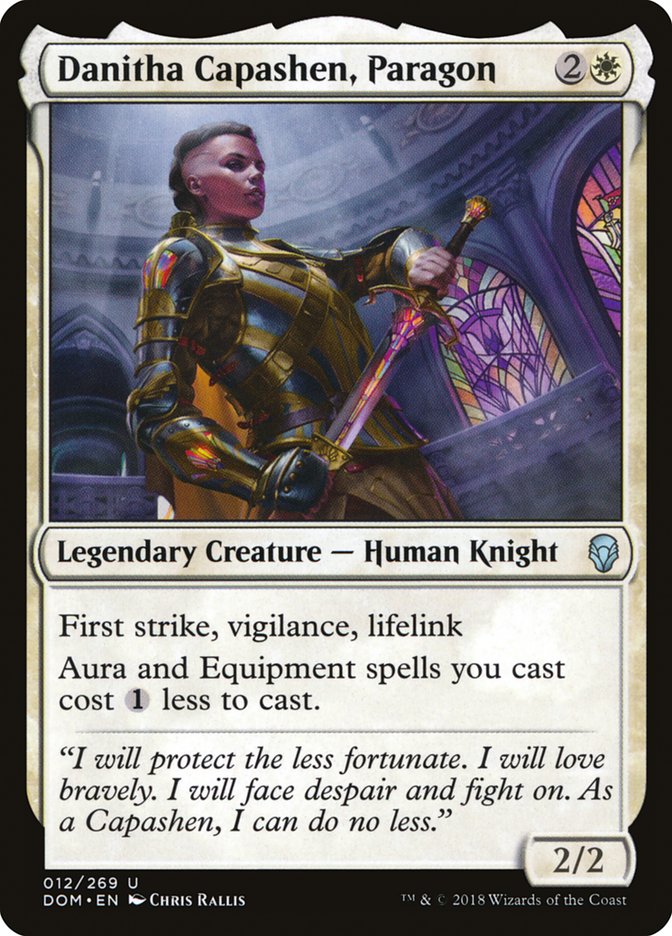 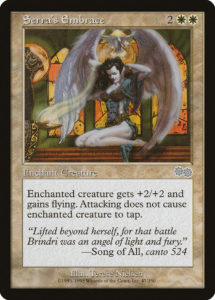 Similarly, the Saga mechanic is an important part of Dominaria‘s celebration of Magic. I advertise these reviews as gameplay-free, so I won’t comment on their operation or power level, but I will point out that their unique layout and strikingly different art direction draw attention to them. And since every single one of them is named after important events in Dominaria’s history, this draws players’ attention to those same events. “You may not,” they say, “have been following Magic when these events originally played out in expansions. But you’re here now, and you can be a part of them now.”

In some contexts, this kind of thing is referred to as flipping or changing the narrative. Time Spiral depicted a world facing its literal end; though the block ends with the Mending and glimpses of future designs, the original intention was that future settings would move away from the plane, and parts of the block have an elegiac quality, the feel of a closing book. By contrast, Dominaria‘s tone is celebratory. The plane’s present is not the same as its past, and its future will be different again; but it is our place, whether we’ve been playing for twenty years or twenty days. And it will always be our place, in another twenty days or in another twenty years. The YouTube trailer and the bundle packaging even say “Welcome Home”.

There is another powerful lesson to be taken from the story of Magic’s homeworld. While Future Sight showed us many potential outcomes, much of what it showed has not come to pass, and some certainly never will. This is the nature of the future: it is uncertain, and it is shaped by many things, not least our own actions. Time Spiral suggested that it would take a miracle to save Dominaria – yet that miracle happened, just as miracles sometimes happen in real life. We all must walk through the darkness at times; this is the nature of being human. There is often ample reason in our lives for frustration, anger, and feelings of helplessness. But as long as we can move forward, there is also hope for new light, for rebirth; hope for mending. There is hope for the future. 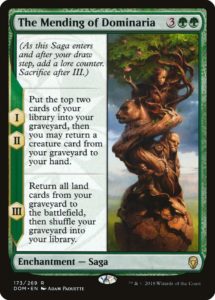