Home Featured Articles The Last Day of the Year: A Gameplay-Free Review of The Brothers’...

One of the most famous lines from Jeff Grubb’s novel The Brothers’ War simply reads: “It was the night before the end of the world”. But can something as immense and complex as a world have a single end point? Remember, the Golgothian Sylex’s detonation didn’t end all life on Dominaria: it was the trigger for the transition into an ice age, the one Magic refers to as the Ice Age. In the centuries that followed, this process caused much misery and suffering, but then led to the unique features (and wonders) of that epoch. And it led eventually to the World Spell and the stories of Gerrard and Hanna and Mirri and Ertai and Crovax and Sisay and Kamahl and Jeska and Venser, and all the other stories that could not have happened without Freyalise’s intervention. But would that have seemed worth it to the people who struggled through those decades after the battle on Argoth? And to Heidar and everyone else who was born during the Ice Age, those frozen millennia were their normal, their home. How do we balance the fact that the World Spell was just as apocalyptic to Heidar’s society as the Sylex was to Terisiare? 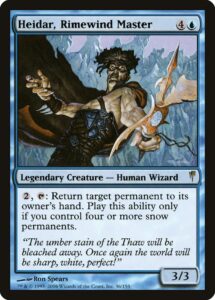 The fact that we can even have this type of conversation about it makes the Brothers’ War one of Magic’s greatest flavor creations. The Brothers’ War is the Magic multiverse’s analogue of the Arthurian legend, or Homer’s Iliad, or the Three Kingdoms, or the Poetic Edda; or any other work that tells a group who they are and shapes the way they move through time, and shapes the ways they interact with the ups and downs of fortune. It plays this role for a fictional world and fictional societies, yet makes us feel all the same things those fictional inhabitants do. There is no other Magic story which does this to the level that the Brothers’ War does.

And the set based on it is, for the most part, successful in bringing this into the 21st century. Antiquities seemed bursting with enthusiasm, almost overeager to show what Magic could do, with its metallic creatures and wordy cards that used long paragraphs of rules text to explain concepts and ideas from the story. The Brothers’ War is also bursting, with bombast and color and the refined art and flavor tropes of thirty years of Magic. Giant robots may not be unique any more, after two blocks’ worth of Mirrodin, plus Kamigawa: Neon Dynasty, but the set shows us Urza and Mishra’s battles in a level of detail which they’ve never had before. We may not ever be able to see those battles with new eyes, but we have certainly been treated to seeing them with a new style, a modernized aesthetic that shows love for the source material and updates it with everything that fantasy art has learned since 1993. 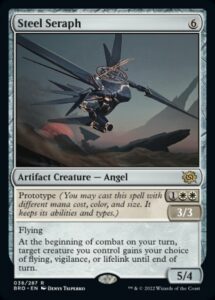 Magic cards range from a mediocre to a terrible medium for telling a story, but the set The Brothers’ War is well served by having its story spotlights be based on major moments from the novel The Brothers’ War. This means that the set and the novel have the inverse of the usual relationship: the novel for, say, Odyssey was made to accompany the cards, but The Brothers’ War set was made to accompany the story. This means it gains the benefit of Grubb’s highly effective characterizations and world-building. For example, the habit of drawing parallels between the Brothers’ War and World War I come from that era. These are portrayed vividly in the glimpses of ordinary soldiers’ exhilaration, fear, and eventual numbness, as the war reaches an unimaginable scale. And the characters are stronger than in many Magic sets, too – this is partly due to their established importance to Magic’s lore, but also because the cards gain from the way Grubb humanized almost everyone involved.

The Brothers’ War – both the story and the set – reminds us that the story of the world is the story of people. Personally, I don’t subscribe to “great man” theory; but even if you do, a great man is still a man. There are few indeed who are motivated purely by ideology or by abstractions – even the most idealistic among us have emotions, and idealism often assuages fear or stokes hope. And idealism sometimes gives way to things that are more pragmatic or less high-minded, but which address those fears and hopes and connections that are part of us all. One of the central tragedies of the Brothers’ War is that it would have been unnecessary if Urza and Mishra had learned to talk to each other, and it became inevitable because they could not; another is that neither could let it go, because it was all they had left of their brother.

If the story of a fictional world like Dominaria is that of people, then it is, in a sense, our story too. And the Brothers’ War fits better by far with the zeitgeist of 2023 than that of 1993. Our social feeds – and our minds – are filled with terms from the story of Urza and Mishra. Cold war. World war. Overindustrialization. Transhumanism. Climate change. Mass extinction. Societal breakdown. The more I think back on the story that The Brothers’ War is based on, the less it feels like just another genre fantasy story from the 1990s, and the more it feels like it was ahead of its time. 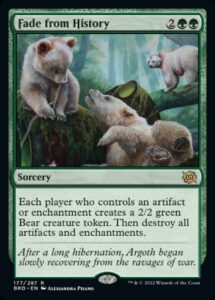 And just maybe, it helps us find hope in confusing, trying times like these. The climactic battle on Argoth took place on the last day of the Argivian calendar, Mishra’s birthday. Urza’s birthday was the next day, the first day of the calendar, so that there was only one day each year when they were exactly the same age; as Mishra saw it, truly equal. It was the most important day of Mishra’s year, the end of a year which had seen new depths of destruction and suffering, and it could be nothing but the end of a war and of an era. Then Urza’s spark ignited, and he learned the truth – the story never truly ends.

History has no epilogue, and none of us knows exactly what our part in it is to be. All we can do is keep going, keep fighting the fight in front of us; while some see the shadow of death as making all fights hopeless, the flip side is that the inevitability of rebirth makes all fights victorious. Like Urza, we will win and we will lose, in ways we never imagined; like Urza, we can strive to be remembered for what we were, and for what we tried to be.