Home Featured Articles The Evolution of Yugioh Part I

Our story begins in Frostbite Falls, Minnesota, where our heroes, Rocky and Bullwinkle…I’m sorry, that’s a totally different story.  As the title suggests, I’m going to touch on and tackle a theme of evolution in Yugioh.  Specifically, the theme of Fusion, although this will spread into other territory as well. 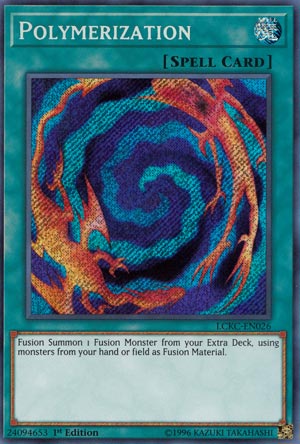 Fusion is quite a concept in Yugioh, especially in the original and early days of the game.  Combining two or more Monsters to become another, albeit at the time, being forced to use Polymerization, to bring out a stronger Monster.  These were Special Summons, which weren’t particularly easy to stop at the time, as opposed to today.  Fusion plagued the early Yugioh for a few reasons.

First, there weren’t hardly any Fusion Monsters that were worth playing.  Many were without effect, and the attack gain you’d get from the Fusion didn’t warrant giving up three (or more) cards to bring one out.  Secondly, Polymerization was practically the only way to do this, but this did improve, slowly over time.  (More quickly as the game continued to progress) with the first notable ‘improvement’ being Fusion Gate.

Fusion Gate changed the Fusion mechanic.  It got to stay on the Field (being a Field Magic card) until you were ready to perform a Fusion.  Being a Field Magic, your opponent could use it as well (as unlikely as that likely was) and with Magic/Trap destruction at a relatively low card pool at the time, such a thing wasn’t terribly risky to play and leave on the Field.

Fusion continued to evolve, yielding things such as Magical Scientist (which didn’t require a Fusion card, just enough Lifepoints to bring out a Fusion Monster(s) in multiples of 1000) and eventually was Banned due to OTK.  Cyber Stein came along with the gargantuan price of 5000 Lifepoints for a Fusion Summon, but it could be ANY Fusion Monster you had in your Extra Deck, and also, found itself banned due to OTK.

But the Fusion pool continued to grow, as new cards (Future Fusion, Instant Fusion, Overload Fusion, Super Polymerization, Ultra Polymerization, just to name a small handful) came about, and these cards performed Fusions in new ways.  Using different resources and methods, but the problem with Fusion was that you still needed one of these many cards, in ADDITION to the Monsters you’re using for the Fusion.

XYZ furthered this idea of Synchro, which is yet another, further evolution of Fusion.  XYZ Summoning dropped the Tuner requirement, making the merging and XYZ Summon of a Monster just requiring Monsters of the same Level for XYZ Summoning.  The Monsters still are Fusing together, two (or more) to become one new Monster, but it’s getting easier, again, (as it did with Synchro) as to how to do it.  (And yes, like Synchro, there are theme specific XYZ requiring specific types to XYZ Summon in addition to just the same Level of the Monsters, as you know).

So, as fun an idea as Fusion originally was, and impractical as it may have been, Fusion helped pave the way for these future ideas of Synchro and XYZ in the game of Yugioh.  Evolution for the game is important, to keep things fresh and fun, and keeping the game from growing stagnant.  Next time, I’ll expand this further to include Pendulum and Link Summoning.