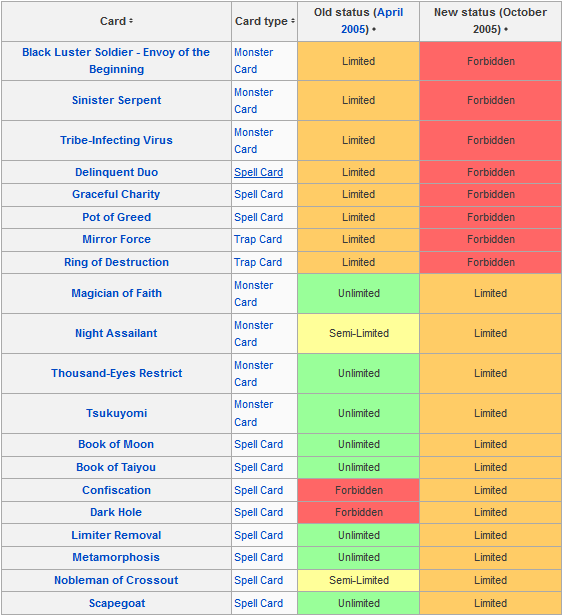 This revolutionary ban list ended the Goat format.  It eliminated some degenerate combos and reduced power creep though some superfluous decisions remain.

Larger life point pool.
Ring of Destruction (in both players decks, reducing both players life points), 1000 life point cost for Delinquent Duo and the 3000+ life points you needed to have to survive a Black Luster Soldier meant that there was little room for additional life point costs.  Part of what made Scapegoat an essential card was the fact it was chainable and protected from attacks.

Degenerate decks: some gone; some remain.
Book of Taiyou limited was a nerf on Empty Jar while Limiter Removal nerfed machine decks built entirely around OTK’s.However, Dimension Fusion, Cyber-Stein and Giant Trunade were still at 3.  Skill Drain was untouched.  Stall/burn were not really hit at all.

The Trinity
Pot of Greed was brainless card advantage.  Delinquent Duo involved too much randomness and punished opponents that did nothing wrong.  I do see a case for Graceful to not get banned in a post-Goat format due to Night Assailant/MoF/Sinister already being hit and Monarchs replacing Airknight, but in a less powerful format, one could also argue that Graceful might stand out as more powerful relatively.  The most puzzling decision was replacing Delinquent Duo with Confiscation.  It replaced the discard slot with a less degenerate card, but did we to replace it in the first place?  The game already had Trap Dustshoot, but at the time, people were not aware of its potential.

Removal
With TER, Ring, Mirror Force and Tribe hit, Konami wanted to reduced both extremely versatile removal, as well as mass removal.  Cards like Smashing Ground, for example, and Sakuretsu (at the time), weren’t getting much use because there were cards that plain dominated it.  One questionable decision was deeming Mirror Force to be banned, yet allowing better cards like Dark Hole (and Torrential Tribute for that matter).  I’m assuming their logic is that Mirror Force allows players with field advantage to keep stomping whereas the others require the player to not over-extend.

Debatable but Understandable Decisions
* Magician of Faith to 1.  Yes, the Trinity is gone, as well as Tsuku/Morph being limited.  But it’s understandable that Konami didn’t want players to use cards like Heavy Storm and Snatch Steal 3 times.
* Nobleman of Crossout to 1.  I can see why people may disagree about having less outs to flip effects, but on the other hand, NoC is skill-less effortless removal and the format is trying to tone removal down.
* Book of Moon to 1.  I can see why many would disagree about limiting such a balanced 1-for-1 card, but with the other powerful cards gone, there was a concern with Book of Moon turning into a catch-all staple at 2-3, and the point of this list was to free up deck space.

Superfluous Decisions
* Why limit Scapegoat when Metamorphosis was already at 1?  At best, nobody would have ran more Goats than Morphs anyway.  At worst, Konami hit one of the few chainable cards that can counter an OTK deck.  Let’s also keep in mind that Airknight and Exarion already hard-counter goats.
* Why ban Sinister Serpent while all of its best synergies were also hit?  With Duo, Graceful and Tribe gone (as well as Meta at 1), Sinister is already not a staple.  I could have seen a case for leaving Sinister at 1 and hitting its synergies.  I could also see a case for banning Sinister and not banning a lot of its synergies.  But these hits were just overkill.