What is Star Realms?

How do you play Star Realms?

I’m not going to go into too much detail on how to play Star Realms, but I’ll give you a brief intro.  Just know there are FREE Apple and/or Android App versions of Star Realms on their App stores.  The tutorial on the free App is fantastic, and that is a great place to learn Star Realms!  But below is a very simple overview.

There is no game board, and everything you need to play Star Realms comes in the box.  Each Player is commanding a Colony of Starships, and they are at war.  Each person starts with 50 Authority (Health Points).  When you reduce your opponent’s health to zero, you win the game.

Each Player starts with the exact same 10 basic ships (represented by 10 basic ship cards).  These ships are kind of crappy, but they let each player start the game off evenly.  The game is a deck builder, similar to Ascension, Dominion, Clank!, etc.  During your turn, you will get to play 5 cards. 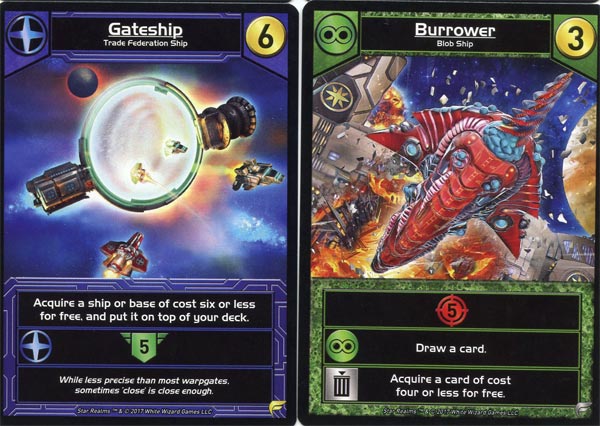 Your drawn hand of cards will give you either:

The Trade Row is a spot in the middle of the table, where a handful of cards are available for purchase for both players.  These cards will change during the game, as the cards are replaced as soon as they are bought.

Your deck grows more and more powerful as you continue to play the game.  You keep taking turns buying cards, improving your decks, and attacking each other until someone emerges victorious.

Star Realms Frontiers Frontiers is a brand new 1-4 player standalone expansion for the Star Realms Deckbuilding Game.  It was funded on KickStarter in 2017.  The KickStarter project raised over 1 million dollars!

Star Realms Frontiers does not require you to own any previous version of Star Realms – It is a stand alone game.  It also gives you the opportunity to play with up to 4 players.  And it adds in 8 Challenge Cards to the game that allow everyone to play cooperatively to defeat larger evils in the universe.  The 8 Challenge Cards even allow you to play solo games against the Challenge Card Bosses!

What’s in the box:

I very much enjoy this game.  I personally like Star Realm Frontiers more as a 2 Player “versus” game, in one-on-one battles, more so than the co-op version of the game.  The Co-op is there if you want it, but it didn’t really appeal to me.  I think this is a fantastic game to add to your collection, especially if you travel a lot with other gamers.  If you don’t own a deck-building, all-in-one game yet, this is a good place to start, as the price is right.