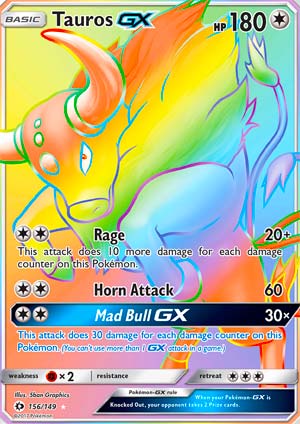 Hello readers! Vince here with another late card review. This time, I’m looking at Tauros-GX (Sun & Moon 100/149, 144/149, 156/149). It was reviewed by the Pojo crew (https://www.pojo.com/COTD/2017/Feb/17.shtml) when it was the best card of the set. It mostly comes down to couple factors, which I would go over as if it was my first time chiming in to this late COTD. Also, I do want to note that a card that was once good or bad before can drastically change due to future cards being released that can affect how well a certain card would do. Sun & Moon was the first expansion to release the first wave of GX Pokemon, and during that time, there weren’t any anti-GX counters to try to take them down, and cards that reference EX Pokemon do NOT affect GX Pokemon despite both mechanic guarantees two prizes if said GX Pokemon is knocked out. Now, after the advent of SM Ultra Prism, we would have already seen the extent that can affect the performance of certain Pokémon.

Being a Colorless type does it no favors, as it hits nothing for weakness and is stopped cold by Necrozma-GX’s Light’s End ability. 180 HP is on par with all of the EX Pokemon that we already saw, but one might wish for higher HP. Being weak to Fighting is actually dangerous, with Buzzwole-GX and Lucario-GX seeing lots of usage as of late, so it might not take a hit from those two. As of now, it would take a Jet Punch backed with Beast Energy and Choice Band to OHKO Tauros-GX. My goodness, now it looks bleak in that matchup! The retreat cost of three is so unfitting for a Pokémon that is pretty fast in the video games, though it can be searched via Heavy Ball and gets a small boost via Heavy Boots, which increases max HP by 20 and said Pokemon can’t be confused. Pretty specialized, though it’s nice to see different effects working together. 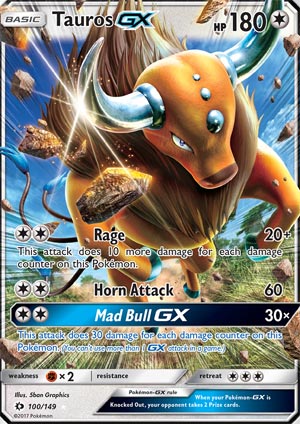 Each of Tauros-GX’s attacks costs CC, sos a single Double Colorless Energy fulfills them all. Rage does 20 damage, plus 10 more for each damage counters on this Pokémon. Horn Attack does 60 damage without other effects. And Mad Bull GX does 30 damage times the number of damage counters on this Pokémon. These attacks aren’t amazing, but can be brutal under the right circumstances. Unfortunately, those attack can lose momentum and traction because these attacks cannot hit repeatedly and reliability. Sure, you can hit ridiculously hard when Tauros-GX is in dangerously low HP, but that’ll mean your opponent will send in a small attacker to finish you off. You’re not pulling ahead of prizes due to being retaliated back for a KO. Rage, even backed with a Fighting Fury Belt still falls short of OHKOing 250 HP Pokemon, as even with 10 HP left, you do 20 (base damage) plus 10 (Fighting Fury Belt) and 210 (21 damage counters) will total 240 damage. If you go with the Choice Band route, that’ll be 220 instead. Professor Kukui will secure the KO on most cases. Mad Bull needs nine damage counters to KO anything, but can only be used once per game. And Tauros-GX can still be KOed even at 90 HP. When both attacks can’t do much for you, then Horn Attack will be your last resort if Tauros-GX is undamaged. Although reasonably priced, one would wish Horn Attack did more damage.

So how do we use Tauros-GX? Well, it can fit into any deck. I did hear about being paired with Ninja Boy, something to swap a damaged Basic EX/GX Pokemon with this Pokémon and blast them with either Rage or Mad Bull. Also, since it has no abilities, it can pair very nicely with Garbodor, whose Garbotoxin shuts down all abilities as long as it has a tool attached to it. And you can add in several disruptive cards to give your opponent’s even more grief on top of ability-lock. At least that what it was being used for back then. It could be used just like that now, except that I haven’t heard much about Tauros-GX in 2018, probably because it isn’t the main focus of a deck. There were decks with Tauros in 2017, but only two of those decks. And they’re both accompanied with Garbodor. Even though I haven’t seen any as of mid 2018, I’m not ready to count it out just yet.

In Limited, if you pulled one, then definitely use it. Double Colorless Energy is in the set, so you can easily attack with just one attachment. However, I cannot bring myself to give it a five out of five for Limited anymore because I could mislead people into thinking that such a card is unbeatable when it’s not. Horn Attack may get an early KO, Rage could be the second or third KO, and Mad Bull can be saved as a finisher.

Conclusion: Tauros-GX was a good card when it came out, but has been overwhelmed with other rivals that can actually hit repeatedly, rapidly, and reliably, without compromising too much. Still, don’t underestimate what Tauros-GX can do, as even one retaliatory KO on your only fully setup Pokemon can slow your momentum down, leaving you resourceless. 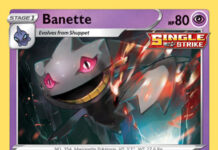