2 Level 10 monsters – Once per turn: You can detach 1 material from this card; inflict 2000 damage to your opponent.

Superdreadnought Rail Cannon Gustav Max despite its high level cost had some hype when first released, and is still a powerhouse now that the card pool has grown.

Two Level 10 monsters is easier than specific monsters, and there are plenty of Level 10 monsters in the game that are easy to summon (they reduce their ATK typically in half, but that won’t matter). While LP aren’t the most important thing in Yu-Gi-Oh nowadays, 2000LP damage via effect on top of 3000ATK is something to be concerned about. Board-wipe your opponent with any of the available cards, drop this thing and their LP is cut almost 3/4ths. If they used something like Solemn Judgment or Solemn Warning, this card would likely be the death of them. Trains and Eldlich have been playing this card and have relative ease summoning it, especially in Trains. Timelords in the past were also a viable target for Gustav Max to be dropped into. With the addition of Superdreadnought Rail Cannon Juggernaut Liebe into the game, detaching and then leveling up into something much bigger not only puts your opponent’s back against the wall, it drives them through the wall.

While not ever deck can play it, its destructive power is obvious and is only made better by Liebe. I think there will always be a place for Gustav Max in the game, and if there are more Level 10 monsters made that are easily summoned you may see a comeback to it being a prominent card.

Number 9 on our list gives us probably the best Rank 10 we have, though it would of been funnier if this got the #10 slot. Anyways, from a Jump Subscription in 2012 we have Superdreadnought Rail Cannon Gustav Max.

Gustav is a Rank 10 EARTH Machine with 3000 ATK and DEF. Any stat in the 3000s is always strong, EARTH is a great Attribute, and you got the great Typing of Machine to combo with it. It needs any 2 Level 10 monsters to summon, which isn’t as daunting of a task as it sounds on paper with Rank 10 Trains and EARTH Machine in general being a thing. The lone effect lets you detach a material to inflict 2000 damage to the opponent once per turn. Getting 2000 burn is pretty good on any card, especially on one you don’t have the biggest issue of summoning like this. Being a soft once per turn does create potential FTK problems, but I feel this is the last of your worries if you want to hit those combos. Summoning this can guarantee 5000 damage alone assuming the opponent has no monsters and the effect goes through, meaning you just need to find another 3000 damage. Nowadays, you can just slap Juggernaut Liebe on top of this after dealing 2000 damage and detach another material from Liebe to get a 6000 ATK body that could attack multiple monsters or go for a direct 6000 damage to end the game. Gustav is the face of the still small Rank 10 pool, and I doubt that’ll change anytime soon.

Art: 4/5 for the birthday candle and 4.5/5 for the actual cannon we finally got as a Lost Art.

I love the Robot and Train and Gustav XYZs.  They’re powerful as hell, they’re big and beefy brute mechanical Monsters, and they all have great art.  (Takes breath) Superdreadnought Rail Cannon Gustav Max is a Rank 10, Light/Machine XYZ, with 3000 Attack and Defense.  Two Level 10 (any two; kinda feel Machine specific might have made sense).  Detaching an XYZ Material deals 2000 Damage to your opponent.  25% of your opponent’s Lifepoints for a detach like that is just crazy.  Naturally, this has to be Limited to once per turn, but if you get both (and let’s say only both) there goes HALF their Lifepoints.  It evolves up yet, and this (these cards I suppose too) can certainly end games quickly enough if you protect, and your Damage goes through.  Obviously, best build and used in Machines, but if you can pull of a Rank 10, and have the room to play with one, you should.

Art:  4.5/5  Aside from the actual cannon barrel, this doesn’t seem to look QUITE as big or powerful as the name suggests.  I, however, will not be challenging that anytime soon. 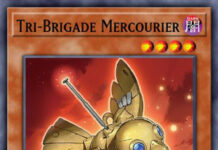