Home Featured Articles Stand Up And Fight: A Gameplay-Free Review of Kaldheim

If you’ve been reading my reviews for long enough, you know that there are two real-world themes that I’ve always longed for Magic to do: Arthuriana and vikings. Both of them exist now. We should be done. All should be right in the world.

So where was the hype from me? How are there weeks from late last year and early this year when I didn’t even mention upcoming sets? Why didn’t I do, I dunno, a countdown of existing viking-relevant cards, or something? There must have been one Hel of a distraction . . . 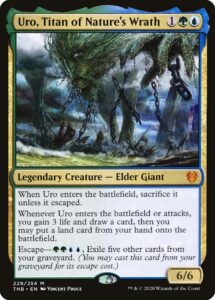 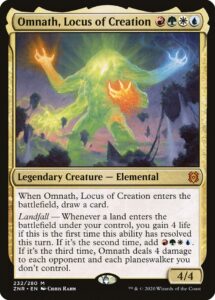 It seems awfully coincidental that Standard fell to pieces at about the same time as the world seemed to be falling to pieces. Back in the Viking Age, of course, people would have said that was not mere chance but rather wyrd; the warp and weft of the world as woven by the Norns. 2020 was the year we needed Magic the most, as our hobby and our outlet and our rainbow bridge to realms beyond. 2020 was the year that it failed many of us.

And that, in turn, is part of why I wasn’t more hyped. Yes, vikings are something everyone loves and something everyone dreams of being. And if Wizards of the Coast puts them in the same set as something that destroys every format known to man, that’s what everyone’s going to be talking about instead of the dream of adventure and discovery. I’m still angry that so many of Throne of Eldraine‘s cards got banned, because that’s all some people talk about with that set. And that is not what we should remember it for.

But back in the Viking Age, they would also have said that time is not a straight line, but rather a circle (or possibly a spiral). Everything changes, but we come around to the beginning once more and we try again. Where there’s life, there’s hope (and sometimes even where there isn’t).

The Seeress’ Prophecy, our main source for the Ragnarok myth, contains haunting stanzas describing the future moral decline of the world, and eventually, its actual physical destruction. In its vision, chaos rises and engulfs the world of man, and eventually the gods themselves:

The sun turns black, earth sinks in the sea,
The hot stars down from heaven are whirled;
Fierce grows the steam and the life-feeding flame,
Till fire leaps high about heaven itself.

Now Garm howls loud before Gnipahellir,
The fetters will break, and the wolf run free;
Much do I know, and more can see
Of the fate of the gods, the mighty in fight.

But this is not the end of the Seeress’ tale. She also sees a new earth rising from the dark, turbulent sea, and animals and humans creeping forth from their refuges, and the gods returning to raise beautiful new halls in Asgard. The hope for rebirth is eternal and it is universal; it transcends era and geography and language. And it is expressed more clearly in the Seeress’ Prophecy than almost anywhere else, which makes it fitting that Kaldheim was the first expansion of a new era for Magic and for the world in general.

And besides, Magic is too diverse to be ruined by any one card’s terrible design or any one format’s terrible failure.

Henry Bellows described the Seeress’ Prophecy as “a series of gigantic pictures”, and this is actually an apt description of Kaldheim‘s flavor, too. We see the diverse peoples of the plane, and things from its various realms, but the full details of their relationships are not always clear from the cards. Even its Story Spotlight cards are rather enigmatic, in some cases raising more questions than they answer. What do the dwarves or the giants think about the conflict between Alrund’s family and the Einir? Phyrexians aren’t capable of having sparks and plane-born beings can’t planeswalk without them, so how is Vorinclex in the set? We have glimpses of a world and its inhabitants, enough for us to know more or less how it works and what it’s like, but not enough to form the kind of detailed narrative that we’ve been trained to demand.

Now, the historical Viking Age was primarily a time of oral traditions; a lot of what we know about it comes from archaeological finds and reconstructions, the surviving contemporary histories from the literate societies of the time, and later writings like the Icelandic sagas. If this fragmentary way of dealing with the story was intentional, it’s quite clever. Unfortunately, Kaldheim is not supposed to portray a plane from Magic’s distant past, like Champions of Kamigawa; it’s a part of the contemporary multiverse and a place that the current crop of characters interact with (Kaya and Tibalt are central characters in its story). For such a purpose, it might be better to have a more detailed treatment which is more readily available. (There are additional stories on MagicTheGathering.com, but not everyone reads those – even I’m not fully up to date on Kaldheim‘s.)

On the other hand, it’s certainly amenable to engaging with the cards as individually appealing pieces. The art director and the artists did a particularly good job, on both the main illustrations and the “heavy metal” alternates. The former look exactly how the Eddaic stories look in your imagination, and how we would have liked the historical Viking Age to have looked. And the latter could universally have been on the covers of Amon Amarth albums. 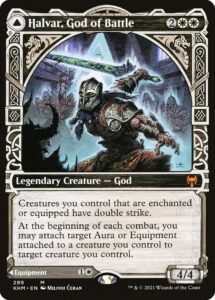 In a sense, this gives parts of the set a little bit of a “generic viking adaptation” feel. But since this is Magic’s first explicit viking adaptation, it’s unique for its context. And of course, the viking spirit is foundational to modern fantasy – and, for that matter, our modern imagination. Some people have tried to dismiss this spirit in the modern world, to relegate it to the fringes of society with the pirates and the chancers and the ne’er-do-wells. Utter nonsense.

There is more to the Viking Age than turbulence and violence and piracy. It had all of these at times. But thinking of vikings as universally being drunken louts or rootless rapists is fundamentally equivalent to thinking of them as universally being noble warriors: both views come from tunnel vision. Believing one biased source about the Viking Age is not better than believing a different biased source about it, because it was a time of growth and change inhabited by people just as intelligent and complex as those who live now.

And in fact, all those years ago, vikings knew things that many in our modern society are in danger of forgetting. The value of friendship. The need to be remembered for something good. Finding the courage to face the vagaries of luck (or fate, if you prefer). The importance of curiosity, whether you sate it by sailing to Vinland or by walking to the library. Breaking the rules when they need to be broken. Doing what makes you happy.

Neil Oliver, BBC TV’s coastline enthusiast, wrote a passage in his Vikings: A History which has haunted me for years:

Not for us the magnetic draw of uncharted territory or the promise of wealth and glory beyond the horizon. Most of us are slaves by any other name, and we have forged our own shackles.

Perhaps all the longships have been beached, and all the fences stand tall, and all the seas are a little smaller than they were in the Viking Age. But the viking spirit never truly died: a spark of it exists in all of our hearts, and when it burns bright it can propel us to a better life, and a better world. I pray that Kaldheim might help to reignite that flame within you, for nothing is beyond the All-Father’s sight, even a silly card game like ours.