Source credits and thanks:

Stalking with the PokeRadar is simply walking in the chaining area while avoiding everything except the shiny patch. We repeatedly recharge the radar hoping to get a shiny patch next.

The best odds are when we start stalking at chain 40. Therefore, many players have that goal.

I spent a few hours over each of 8 days recently to do some short chaining tests, or stalking well before 40.

For the tests, I decided to stalk at 20, 30 and also 40, since we get perfect IVs as a reward for reaching each chain number.

Tests were in half hour intervals. For each test, I kept track of how many max repels were used plus the chain numbers and elapsed time. I felt these would be good data points for quantitative comparisons of effort between reaching 40 versus stalking earlier.

My secondary goal was to catch 9 shiny Eevee in the Trophy Garden, enough for the complete set. Eevee is my favorite pokemon and I was going to run these tests anyway, so why not try!

Detailed raw data logs follow this table which summarizes the test results. After the summary, I suggest you read through them for a couple lessons learned. 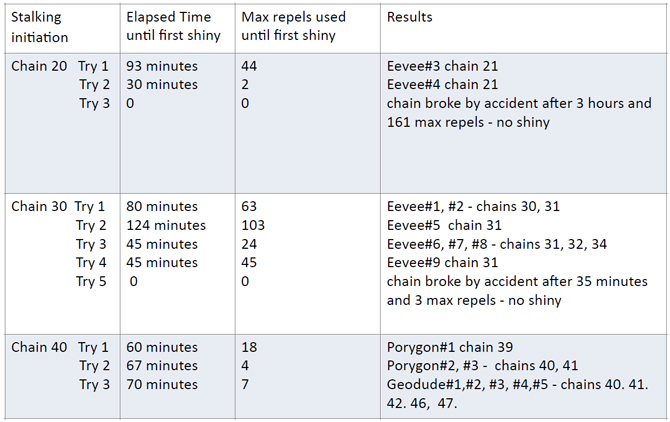 After these tests I left the Trophy Garden for RT 207 by Oreburgh to chain Geodude and had to choose between stalking early or going for 40.

I choose to attempt 40 and after about 70 minutes and 7 max repels caught back to back shiny geodude on 40 and 41, then caught a shiny on 42, then another on a second closest tile. I decided to run the chain up freely so the next shiny was on chain 46, but then it finally broke on 48.
The result of my choice to run up to 40 was 5 shinies. Three held everstone.

Next I will stalk Swablu at 40.

Sometimes short chaining pays off, but I still prefer attempting 40. Most times it proved faster and cheaper, compared to short chaining and stalking at 20 or 30. Anyone can get lucky with an early shiny. It takes more to succeed consistently. It is worth the effort to learn how to use the PokeRadar properly. Get the best odds the game offers. Build your confidence and go for it!

All of the shinies mentioned in this article are for trade. To get one (free) just post to Pojo’s Pokemon Brilliant Diamond/Shining Pearl Forum and let me know what you’d like. As always, comments and feedback are also welcome!

DAY 1 goal is start stalking at 30 TEST Fail
I found Eevee 7 times (5% encounter rate) with 3 no-start chain failures – the 4 other chains broke with the highest at 28. I never got a chain to 30 today. rip.

There is some agreement that if you are only after one shiny then short chain and stalk early rather than go to 40. When stalking early at 30, my first shiny took 80 minutes and 63 max repels. This is about twice as long as it would take to chain to 40 and 10 times the number of repels I would use.
Next shiny was 1 hour 50 minutes, 62 max repels used – again this is multiples of just going for 40. In Try 4, it took 93 minutes for the first shiny (shiny eevee #3) and I used 44 max repels.

Lesson: Most of my breaks happen with tiles under my feet or next to me that I have trouble seeing. If you also have this happen, try chaining when there are no clouds or visibility issues whenever possible. I find the hours before dark and sunrise are usually good, with afternoon the most challenging.

My secondary goal of getting 9 shiny Eevee is done, so I’ll switch to Porygon for a change.

Lesson: we must walk off that type tile in the direction we are facing, so if we are not facing the correct way already OR we’re next to multiple adjacent shakers, then there is a high chance of the chain breaking.