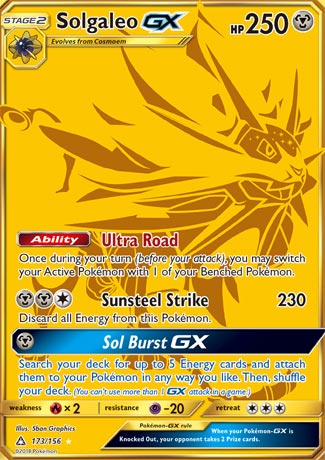 Hello readers! Vince here, and I’m looking at Solgaleo-GX, another late card review. The reason I’m looking at this card is that it has appeared in SM Ultra Prism as a Gold Secret Rare, making old copies from Sun and Moon Base Set prolong the longevity of staying in Standard. A Stage 2 Metal Type with 250 HP, weak to fire, resists Psychic, and a retreat of three, it has an ability and two attacks. Ultra Road ability lets you switch you Active Pokemon with one of your Benched Pokemon, just like a Switch item card. Sunsteel Strike does 230 for MMC and discards all of your energy attached to this Pokémon. Sol Burst GX costs M and attached five energy cards from your deck to any of your Pokemon in play.

The first time I saw Solgaleo GX on a preview, I had an impression that it would be a basic Pokemon. The preview that I saw only showed this beautiful artwork by PLANETA, a metal type, and effect text; no attack cost, no stage, weakness, resistance or retreat cost. However, when I played Sun and Moon (the games), as I progressed through the story, Solgaleo actually had pre-evolutions! It evolve twice to become this legendary Pokemon, making me think that it was a Stage 2, and indeed, this card was a Stage 2. Even with the hurdles of being a Stage 2 such as needing prior stages and Rare Candy, it is very well worth the investment. Ultra Road lessens the reliance of using Keldeo-EX variants and Float Stone, which could be disrupted by tool removal and/or ability lock. Ability lock is still a concern, so try to find a way to go around it.

Sunsteel Strike may be a signature move, but this is actually a very good attack. Extremely generous, I must say, as 230 for three that can be continuously used is not often seen. Other attacks for three energy that does more oftentimes need to burn your GX attack for the rest of the game like Sun’s Ecplise. Discarding all energies attached to your Pokemon may be a concern, but that means opposing Gardevoir GX or other “X-Ball” variants can’t hit you as hard than if you kept these energies. Before, you would pair it with Bronzong’s Metal Links ability to get these energies back. Now, you can pair it with Magnezone with Magnetic Circuit for unlimited energy attachments, so that you can spam Sunsteel Strike turn after turn. Having two different Stage 2 Pokemon is hard to maintain in this present day, and even 250 HP GX Pokemon are at risk of being OHKOed due to raw damage output or Fire Weakness. Fortunately for this attack, there are more methods of getting your energies back to your hand. Mt. Coronet, Energy Retrieval, etc. can help you save resources.

Sol Burst GX was a good GX attack for what it does, because the wording also includes Basic Energy and Special a Energy cards. Having launched four Double Dragon Energy, Rainbow Energy, and/or Double Colorless Energy out of nowhere was scary for your opponent. If you could do this every turn, you’re setup was almost complete! Thankfully, Sol Burst was designated to be a GX attack. However, if your opponent saw this coming, then they would’ve teched in Skarmory, whose Metallic Sound gets rid of all Special Energy cards just after you used Sol Burst, rendering your setup useless and a wasted GX attack. 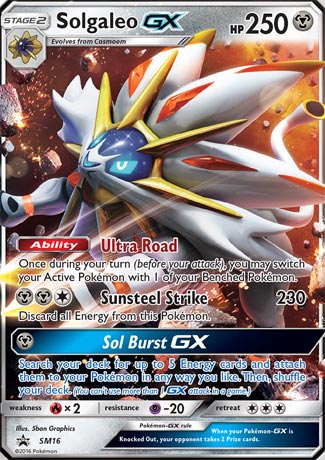 Solgaleo GX has some decks that were worth experimenting whether it be standard or expanded. It could be paired with Lunala-GX because they share the same evolutionary stages. Use Sol Burst to fetch Rainbow Energies and use Psychic Transfer to move energies around to……..pretty much any attacker that you desire. Ultra Road is insanely useful to switch your Pokemon around.

Or you can focus on using Sunsteel Strike turn after turn. I would prefer using between Bronzong or Magnezone, but then I am facing a dilemma. Would I sacrifice Bench space in order to recover at least three Metal energies? That would mean having three Bronzongs on my bench. I could use Magnezone, but I would have to pack with several energy recovery cards to keep using my main attack and deal with possible item lock or Trashalanche fuel.

Overall, Solgaleo GX is still a good card, and the recent Metal support has made this Pokémon possibly experiencing a resurgence. Sure, Dusk Mane Necrozma GX is a Basic and does a similar amount of damage, but Solgaleo GX can get past Stage specific counters such as FlashFire Pyroar or Jolteon-EX and is far bulkier than Dusk Mane Necrozma. In Limited, both Sun and Moon Base Set and SM Ultra Prism has both pre-evolved forms. Rare Candy is in SM Base Set, but Rare Candy wasn’t in Ultra Prism while the Japanese’s Ultra Moon set has one, which is unfortunate. The rarity of both GXs makes it harder to pull even one, and you need to have the other pre-Evolutions. But other than that, if you did pull all of the pieces with 2-2-2 Magnezone line, then you would do the same thing as if you did in Standard/Expanded.