“Majestic Dragon” + 1+ non-Tuner monsters, including a Dragon Synchro Monster
Must first be Synchro Summoned. Once per turn: You can negate the effects of 1 Effect Monster your opponent controls. This card gains 1 additional attack each Battle Phase for every monster in your GY that is “Stardust Dragon” or is a Synchro Monster with “Stardust Dragon” in its text. Once per turn, when your opponent activates a card or effect (Quick Effect): You can banish this card (until the End Phase), and if you do, negate the activation, and if you do that, banish that card.

Shooting Majestic Star Dragon ends the week and is the upgrade to yesterday’s card.

Once per turn negation of an opponents monster effects is good, but would be better if it were a Quick Effect and not an Ignition Effect. The more “Stardust Dragon” or Synchro Monsters with “Stardust Dragon” in their name that you have in your grave, the more attacks you get to do during the Battle Phase. This likely will lend you another attack at the very least, considering using Stardust Dragon or Majestic Star Dragon (likely not summoned correctly), but it isn’t out of the question to have multiple targets for Shooting Majestic Star Dragon to gain extra battles from. Quick Effect to negate and banish through banishing itself removes Shooting Majestic from harm and eliminates a resource for your opponent. In terms of the original vs the upgrade, this effect is better than the original, being both a Quick Effect and now involving removal rather than just negation.

We end the week off with the new evolution in the Majestic line: Shooting Majestic Star Dragon.

Shooting Majestic Star is a Level 11 WIND Dragon Synchro with 4000 ATK and 3300 DEF. Very strong stats overall, same statement can be made here as was yesterday about Type/Attribute. Requirements are Majestic Dragon (as you’d expect) and any non-Tuners, just as long as you include a Dragon Synchro. Nice to be loose in what you can use, even if the idea might of been to use Majestic/Converging Wills alongside Shooting Star Dragon or Majestic Star Dragon to summon this since both are Level 10, but you’re likely using other Dragon Synchros and some various non-Tuners to get this out instead, espeically with Garden Rose Maiden to revive said Dragon Synchro you gave up for this. Anyways, must first be Synchro Summoned, so no cheating this time around unlike Majestic Star Dragon, but this makes up for having the clause since it doesn’t return himself to the Extra Deck. You get a soft once per turn to target an opponent’s monster to negate its effects, no stealing the effects for yourself though and still no Quick Effect, but its other effects are stronger than previously, so that’s fine. Gains attacks each Battle Phase for each Stardust Dragon or Synchro that lists Stardust Dragon in this text that reside in the graveyard. Basically having Shooting Star Dragon’s ability to attack multiple times without the RNG of hitting Tuners off the top of Deck, but instead you have to blaze through some of your Stardust-related bosses or just cheat them into the graveyard. One attack on 4000 ATK would suffice if you don’t put in the extra effort to put Stardust Dragon related Synchros in grave. Final effect is a Quick Effect and a soft once per turn, allowing you to use multiples if you wish, to negate an opponent’s card or effect and banishing said card by banishing this card until the End Phase. No field nuke, but you likely had an easier time summoning this over Majestic Star Dragon, or just summoned this using more of what you wanted while Majestic Star is more specific. Overall, it’s a good stepup from the original Majestic Star Dragon. It’s a worthy boss in Synchrons if you are willing to use a Converging Wills Dragon package, which isn’t the worst thing. Now I just hope to get a Majestic Red Nova Dragon, though the Level would be awkward if this was meant to be 1 Level higher than Shooting Star Dragon.

Art: 4/5 It looks cool and like a complete mess at the same time, probably expected from Shooting Star Dragon getting a Majestic upgrade.

Another Synchro up later, and we end with Shooting Majestic Star Dragon.  Level 11 here, still Wind/Dragon, atk and def get a paltry and realistically unnecessary bump to 4000/3300.  Synchro requirements don’t include Stardust specifically, rather Majestic still and 1+ non-Tuners, one though of which must be a Dragon Synchro.  So we see you MUST first Synchro Summon this card, which kinda sucks, especially after having to hoop up a time or more to get here, but it’s not the end of the world.

You can, once per Turn, negate the Effect of an opponent’s Monster, which is still good.  You’re probably destroying that Monster any after, but it’s a nice assurance to have.  This card also gains an additional attack per each card in your Grave which is Stardust Dragon and lists it in its text.  That should be at least two, could be even as high as 3 or 4, but even just going off say an average of 2, all of a sudden you have a 4000 attacker that can attack 3 times (or more) and that certainly has win written on it, no?

Finally, a MUCH appreciated Quick Effect lets you remove this card from play when your opponent activates a Card or Effect, but only until the End Phase.  See that, this guy DOES NOT return to the Extra Deck after using that Effect, and that’s phantasmagoric after the trouble in bringing this guy out.  Further bonus, if you’re successful, the Card/Effect you negate gets removed from play.  This guy definitely takes more work than yesterday, but he is a step up and better, and I feel it’s worth it if you’re willing to dedicate yourself to it.

Rating:  4.5/5  Potential is in here for sure, and I yield to the potential/obvious difficult in Summon, but it’s great.

Art:  5/5  Another evolution making this pretty.  It’s very shimmery, I’m not sure if we could do this again. 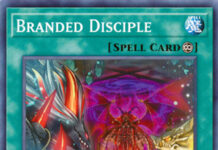 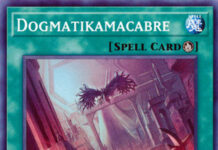 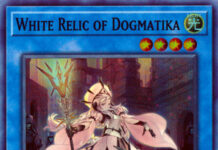