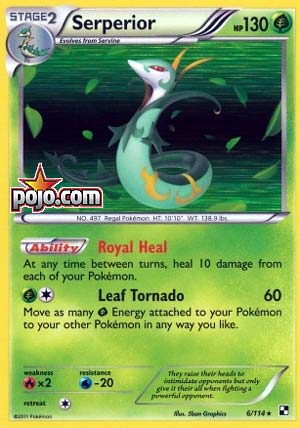 Another personal Throwback from me, I am looking at Serperior from Black & White! There are two Serperior cards in that set, but this is the one I’m specifically looking at because this card has some potential. As this is a pretty old card, it is still Expanded legal as well as being Legacy legal as well. You can read two reviews from this card, one being when it was in May 6, 2011, and the other being in December 4, 2013. It’s pretty fascinating how the views have drastically changed due to time. The first review was around the time where EX Pokémon haven’t exist at the time while the second review was when they’ve seen one and a half year worth of EX Pokémon running rampant. However, if this is your first time reading about this card, then maybe you want to know more about it.

Serperior is a Stage 2, which requires deck space to include Snivy and Servine just to manually evolve or to use up a Rare Candy to skip from being a Basic into a Stage 2. Stage 2s are almost the slowest to get them into play, the slowest being a BREAK Evolution or a Level X of a Stage 2. Serperior is a Grass type, which mattered during the time Forest of Giant Plants was Standard legal, which enabled any grass Pokémon to evolve on the first turn or the turn it was put into play. Suddenly, you can get Serperior in play right away even though you still need the corresponding Basic and the Stage 1. Forest of Giant Plants is still banned in Expanded, and I don’t see it coming back. The alternate thing that’s similar to this stadium card is Rowlet & Alolan Exeggutor, whose Super Growth can make a Basic Grass Pokémon evolve into a Stage 1, which can be evolved again into a Stage 2. 130 HP on a Stage 2 was decent at the time, as it can somewhat survive some medium sized hits unless it is weak to that type (in that case, being weak to fire). Odd numbered HP is better than even numbered HP (increments of ten) because even with a 2x weakness, you can still survive with 10 HP depending on the attack. Water resistance can prove useful, as it needs Water Pokémon to deal 150 damage instead of 130 for the OHKO. And the retreat cost of one is cheap and easy to pay, though modern day Escape Board or U-Turn Board removes the retreat cost by one, making it free.

Serperior has an ability and an attack. Royal Heal states that in between turns, you heal 10 damage from each of your Pokémon. This continuous effect cannot be ignored and it will continue to heal in between turns. This means you could heal 20 damage (10 due to your opponent’s turn ending and 10 more due to your turn ending). This effect stacks, so if you have 4 Serperior in play, then you get to heal 40 damage between turns. The amount of healing can occasionally offset prior damage that you took, buying you more turns unless your opponent OHKOs said Pokémon or that it does 2HKO plus overkill. I remember Nidoqueen from Platinum Rising Rivals that did a similar thing via Maternal Comfort Poke-Body, but you can’t use more than one of that ability regardless of how many more Nidoqueens were in play; Serperior is a upgrade from her. Leaf Tornado costs GC for 60 damage, and you can move as many Grass energies from your Pokémon to your other Pokémon. If you know that Serperior is going to be knocked out next turn, then this is a strategic approach to conserve 2 grass energies. Energy management is good, but giving up an attack to do that is not good. Meganium Prime would’ve been a better grass transfer user.

Anyhow, Serperior had a pretty rough start. Not only Black & White had Serperior, it also had Reshiram and Zekrom. Those two defined the meta because it is one of the few Pokémon that has very good stats. Both of them are Basic Pokémon but also had 130 HP, which was now the norm for Black & White onwards. They also have Outrage and another attack that does 120 damage, enough to wipe out most Pokémon at the time, and PlusPower can push the range further. Those traits make Serperior worry about it’s durability, as it can be OHKO by both legendary Pokémon, making healing irrelevant. Even worse, Pokémon Catcher was later released which can drag Serperior into the Active and OHKO it. That was before the errata that was issued late November 2013. Serperior was deemed almost unplayable at that point. Things did change a little, Pokémon Catcher turned into Pokémon Reversal; you need a heads on a coin flip, otherwise this card does nothing. And players going first cannot attack.

This wasn’t the end of the Regal Pokémon, however. Future cards can help Serperior’s playability. I did mentioned Forest of Giant Plants (pre-ban period), but there’s also Servine from XY Fates Collide, whose Serpentine Strangle ability has a chance of paralyzing the Active Pokémon if you flipped heads. That combo helps stall and heal for at least one turn. I won’t be going through other Serperior cards because I don’t think they would replace it; you pretty much need to have a 4-4-4 line to facilitate the healing. I did mention Rowlet & Alolan Exeggutor as an alternative since Forest of Giant Plants got banned at the end of the 2016-2017 rotation. However, if you use Super Growth on a Snivy, Servine’s Serpentine Strangle won’t work because it was played from your deck, not from your hand. So you may have to manually evolve and then use Super Growth. You’re opponent may see this coming and try to KO that Snivy before it evolves, so I guess you’re going to have to forget this ability and evolve twice. Either way, Serperior is fortunate to have a method of evolving fast just like Forest of Giant Plants (or close enough) and it could still see slight play even if it is not competitive.

The Legacy format is similar to what Serperior experienced during the 2010-2011, 2011-2012, and 2012-2013 rotation except that they follow the latest rules. No attacking first turn and Pokémon Catcher’s errata. While that provides some form of protection, it doesn’t stop single prize (or EX Pokemon), big basic attackers like Reshiram and Zekrom from OHKOing it. Garbodor’s Garbotoxin also disables the healing aspect due to being an ability (although Tool Scrapper can rectify the situation).