Home Magic: The Gathering MTG Card of the Day Scion of the Ur-Dragon – MTG Throwback Thursday (2017)

Scion of the Ur-Dragon is cool for so many reasons. He was one of the first five-color commanders, and he invites you to build around one of the most popular creature types in Magic – everyone wants to do things like that, right? He’s a highly flexible enabler for popular stand-alone cards like Patriarch’s Bidding and Goryo’s Vengeance – everyone likes cards like that, right? And on top of all that, he’s part of a long-running flavor reference that stretches all the way back to Invasion and all the way up to the 2017 Commander decks. I feel like that’s an invitation to delve deeper into Magic’s long history, right? 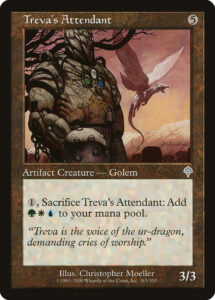 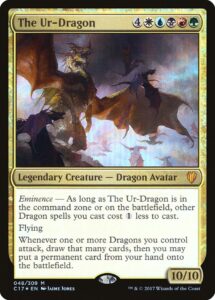 He’s never quite panned out in Constructed play, but Scion of the Ur-Dragon has long been a casual favorite, thanks to both being a five-color Dragon and the kill combo he’s often been associated with. If you have mana to activate his ability twice in succession, you can end the game then and there: first by going into Moltensteel Dragon and paying a bunch of life for the firebreathing ability (usually 12 life to give +6/+0), and then into Skithiryx, the Blight Dragon to poison them to death (it retains the +6/+0 as it changes forms, and Skithiryx’s infect loads them up with a lethal dose of poison).

Outside of kill combos, Scion is mostly a cute Dragon that enables fun things. He’s rarely ever been absolutely indomitable, but he’s fun, and sometimes fun’s all you need. A constraining mana cost makes life a bit harder in that regard, but dragons rarely mind playing with all the colors of the rainbow these days.

Constructed: 2 (Skittles kill combos still work in theory, but good luck pulling them off)
Casual: 4.5
Limited: 1.5 (his sole limited outing was in Time Spiral; the block has bad color fixing and a dearth of swooping friends overall outside of the rare slot)
Multiplayer: 3.5
Commander: 4.5