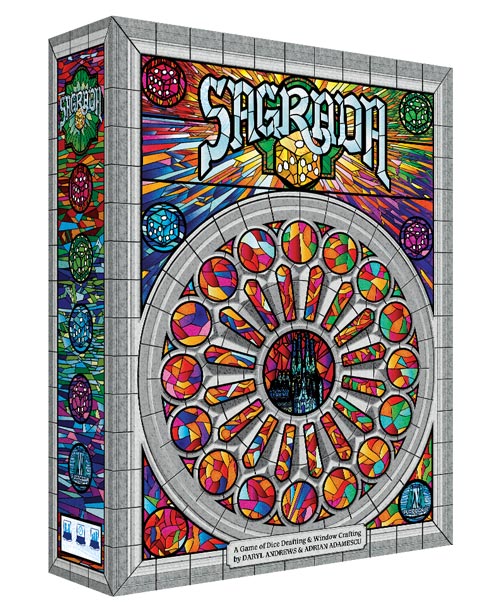 Sagrada is a fun dice drafting game from Floodgate Games (https://floodgate.games). Players are competing to make the most beautiful stained glass masterpieces in the Sagrada Familia.

Sagrada is a clever combination of:

Each turn, a handful of dice are randomly picked from the bag and rolled.  Then players draft the dice and use them to build their stained glass windows.  Sagrada is very simple to play, but takes some brain power to master.

How does Sagrada play?

Each player gets a Window Frame, and some random Window Pattern Cards. Windows patterns have varying difficulty from level 3 (easiest) to 6 (hardest). Difficult windows give players more Favor Tokens to use during the game.

Players are each dealt a Private Objective Card to try to score.  Three Public Objective Cards are also placed face up for everyone to use during final scoring.  These objective cards change from game to game, making each game unique.  You will score points at the end of the game based mostly on Objective Cards.

Each game of Sagrada is played over 10 rounds.  Each round, the Start Player (the player with the Dice Bag) pulls dice out of the Dice Bag at random and rolls them. The number of dice pulled depends on the number of players:

The Rules are simple:

There are a few more rules, but that is the basic gist of playing Sagrada.

There will also be 3 random tool cards put out for all players to use.  These tool cards let you bend the rules to help you finish your window.  You have to use your favor tokens in order to use a tool card though.

Each round, the first player changes.  After 10 rounds, everyone scores their boards based on the Public and Private Objective cards, and one person will wind up the winner.

Sagrada is easy to learn and teach.  One person can easily read the rules in 10 minutes, and then teach everyone how to play the game in about 5 minutes.  The 4-page rulebook is in full color, and is very well written.

Sagrada looks gorgeous on the table.  The components are well made.  And the window patterns slide easily into the player boards perfectly.

Dice!  If you are a dice lover, you get a plethora of colorful dice to roll here.

Replayability! I like that there are variables that change Sagrada from game to game.  There are a variety of Private Objective cards, Public Objective cards, and window patterns for you to use.

Sagrada requires thought and strategy.  Sagrada looks simple from the outset, but you have to plan your moves ahead almost like chess.

The storage box is well designed.  There is a molded plastic tray in the box that holds all the components perfectly.

There is not too much to dislike here.  The only problem we ran into was a dice problem.  Two of our red dice were stuck together and we had to get a butcher’s knife out to separate them.  I think they got stuck together after with fresh paint when the dice pips got painted.  They look a bit ugly where they got painted together, but they still work.  I bet if we contacted Floodgate games, they would send us replacements. 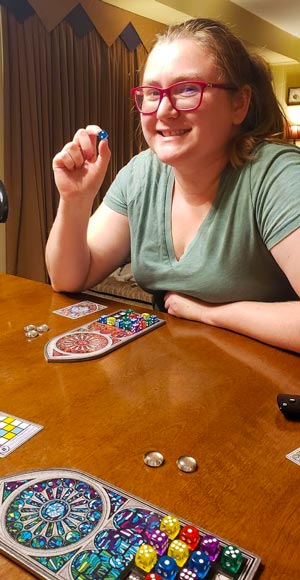 Sagrada get a huge thumbs up from our family.  Each player can adjust their own difficulty by choosing an easier or harder window pattern to build.  If you have played Sagrada before, you can take a harder pattern, and give newer players the easier patterns to even things out.

There is definitely some thinking going on with this game.  You have to try to plan ahead the best you can.  The drafting of dice snakes, so if you are drafting 4th in a 4 player game, you will get picks 4 and 5.  So you can make two picks in a row that probably will work out perfectly for you.  If you are drafting first, you have to try to predict out what two dice might be left for your last pick. You are going to have to do some quick statistical and geometrical calculations in your head to predict what dice will be left for you, and where you will put them.  If things aren’t working out, you might want to use a favor token to bend the rules.

For other gamers out there, this game has a similar feel to Patchwork, Azul, and Carcassonne.  You draft 1 game piece, and play it.

One last thing I like here is that our gaming group is usually between 4 to 6 players.  The Sagrada base game is for 4 players max, but there is an expansion that will take you up to 6 players!  Nice!