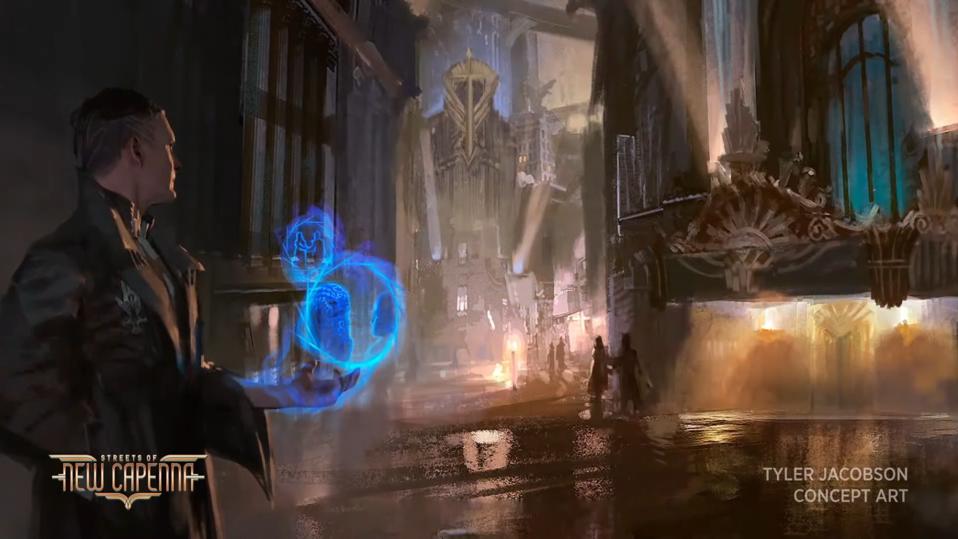 Again, this article took a much longer time than I thought it would. The first reason for that is that I really thought Streets of New Capenna would be Alara, and there would have been very different things to say if it had been. The previews fooled me completely – for example, there is significant overlap in creature types, with both of them featuring aven, rhox, and ogres. And it was deepened when people started posting excerpts from the story where Ajani refers to Capenna as “home” when talking to Elspeth. Ajani is from Naya, and Elspeth regarded Bant as her adopted home.

I’d like to want to be annoyed by this. I really would, because Shards of Alara is one of my favorite sets from the modern era. It deserves a revisit, and I don’t for a second buy that it would be hard because they undid the thing that made it unique, as Mark Rosewater claims. That past practice was short-sighted and perhaps downright stupid, and they’ve retconned so many things since then that it’s also irrelevant. The planeswalker webcomics originally hinted that the guilds had been disbanded, but then Return to Ravnica‘s story glossed over it and made it clear that they came back in unspecified but very effective ways. New Capenna is said to be where Elspeth was born – you know, the mysterious plane that was once controlled (at least partly) by a splinter of Phyrexia. But apparently it was liberated by angels who were overthrown by demons who then created a 1920s-style gangster plane, and by the way, all this would have had to happen in just a few years because Elspeth sparked at age 13 and is said to now be around 30. Because that makes complete sense. Alara deserves a second set, and a return is only difficult to the extent that Mark Rosewater feels like actually doing the work, but we don’t actually need to fight about that in the context of Streets of New Capenna.

One of the best things about Strixhaven is that it offers alternate characterizations of the five two-color combinations that it contains. We refer to the two-color combinations by their Ravnica guild name for convenience, but there’s a downside to this habit: it’s easy to slip into thinking of the guild as being synonymous with the colors. For example, Boros-colored cards beginning from Ravnica: City of Guilds invariably have the Column A plus Column B type of concepts, red bringing anger and white bringing law. This school of design is obvious – perhaps too obvious. It gets boring when that’s the only way a class of cards (whether mono- or multicolored) is made, set after set after set for decades. Strixhaven did more to broaden the kinds of concepts illustrated on Magic cards than two years’ worth of sets before it – and Streets of New Capenna does much the same thing for Alara’s three-color combinations.

In particular, it takes a bold step by having each of its factions be a crime family headed by a literal demon. There is a tendency in Magic flavor to assign villainous characters to certain colors over and over, and assign heroic characters to certain other colors. It has a tendency to emphasize the same elements of the colors repeatedly, too – considering our Boros example again, red is anger but also love, and white is law but also rigidity. This makes things more predictable and more shallow than they need to be, and Wizards of the Coast supposedly recognized that this was unnecessary years ago. If New Capenna is a sign that they’re finally doing something about it, late is better than never.

The Roaring Twenties-inspired setting is a similar bold step. Between New Capenna, Kamigawa: Neon Dynasty, and the upcoming Unfinity, 2022 will have the Magic settings that are least like Magic’s traditional settings. It is definitely crossing a line and it remains to be seen whether the market likes it, but it does address one of the problems that long-running fantasy properties have: stasis. After a long enough time, you might start to ask whether the stasis of the setting prevents you from telling interesting stories, or even just having interesting things to look at (since Magic’s official stories are very much pared-down from their high point).

Abrupt style transitions like our current one are jarring, but they’re far better than the alternative. Have you ever been in the fantasy section at a bookshop and felt like you were staring at a row of the same thing in different wrappers? The same thing can happen with Magic. That variety of experience is the key to making sure our days don’t slip by unnoticed, a grey haze from which we lift our heads and and ask where the time went.

I won’t deny that it feels odd. I don’t blame you for feeling confused at times – much like our great-grandparents experienced a hundred years ago, these are times of new ideas and transitions. Those highly-contrasting styles may be well received overall, but they’re divisive to some groups. On top of that, the conveyer belt of new set releases is rapid and it is relentless; the last one hasn’t even settled before the new one is coming. There’s never been a more important time to curate your own experience, to try things out and choose the ones that feel good for you, rather than the ones that Mark Rosewater or anybody else thinks you should do. This was, for at least some people, a feature of the culture of the Roaring Twenties too; and even though it wasn’t the intended message of Streets of New Capenna, we might do well to think of it when we look at the cards.