We recently got our excited hands on the “The Pathfinder Adventure Card Game: Curse of the Crimson Throne Adventure Path” expansion, and have a quick box opening for you.

What is the Pathfinder Curse of the Crimson Throne Adventure Path?

This expansion requires the “Pathfinder Adventure Card Game: Core Set” to play.  We did a box opening for the Core Set in a previous post.

Another nice thing about this expansion is that it expands the maximum number of players of the Core Set from 4 to 6.

The expansion box is considerably smaller than the Core Set box.  The Pathfinder Core Set’s Box doubles as a Storage Box for future expansions: like Curse of the Crimson Throne.

There aren’t a whole lot surprises in here upon opening the box.  You get 5 sealed packages of cards, a set of character tokens to punch out, and the Storybook for Curse of the Crimson Throne.

As we haven’t played the Core Set yet, we decided to keep all the card packs sealed, except for the package of character cards.  Here are the 4 new characters you can play as inside this expansion:

The new playable characters are:

I don’t feel it’s necessary to spoil all 550 cards inside this expansion, but if you really want to know them all, here is a link to a PDF from Paizo that lists every single card.

And here is a glance at a typical Scenario in the Storybook:

Curse of the Crimson Throne Adventure Path – The King is Dead, Long Live the Queen!

Korvosa is cursed that none of its monarchs shall ever die of old age or produce an heir. The metropolis teeters on the edge of anarchy. It needs heroes that can face down crime lords, rioting mobs, insane cultists, virulent plague, undead hordes, scheming devils, corrupt nobles, barbarian chieftains, and ancient and forgotten evils that seek to dominate and sacrifice the city.

The Storybook is 48 pages long.  The Adventure Path consists of 6 Adventures and 24 Scenarios.  There is a Bonus 7th Adventure – made up of a Single Scenario on the last page.

For me, the main appeal of this expansion is that it allows our gaming group to play the core set storybook – The Dragon’s Demand – with 5 or 6 players.  The Core Set has a maximum of 4 players. 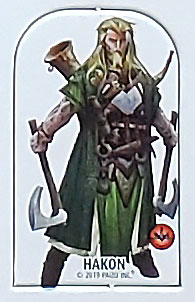 The Curse of the Crimson Throne Storybook looks like a deeper adventure than The Dragon’s Demand from the Core Set.  There are twice as many adventures, and 15 more scenarios.  So if you like the Core Set, you’ll definitely want to pick this expansion up.