This was the last article I wrote in 2014 before taking a hiatus from the site and Yugioh for a bit.  After this point, my articles become less about reminiscing and more about other topics.

Nostalgia is a powerful emotion.

Nostalgia is an ever-present emotion in the human mind.  All of us miss and long for the things we used to have in our childhood.  Not for the merits of what we’re longing for in itself, but rather the memories we associate with it.  Lots of things bring back memories for us: a song we listened to a lot in a crucial part of our lives, scent of a perfume that reminds us of someone, a souvineer of a vacation, a cartoon we used to watch when we were a kid or a food we used to eat when we were younger.  This can also apply to Yu-Gi-Oh.

Nostalgia bias is common, especially in YGO.  There’s a tendency to idealize the past whilst being very critical of the present because it just doesn’t live up to those golden standards.

Remember when the banished pile actually meant the card was gone, and not just that it was a second graveyard?  Remember when people only Special Summoned one monster per turn instead of five? 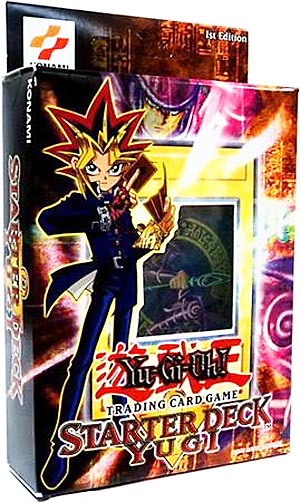 One thing I enjoy doing is dueling people casually in past formats.  A friend and I each had Starter Deck Yugi and Kaiba respectively and dueled each other with it.  These decks were in the good old simple days when there were no mind-racking decisions on whether to Wiretap a Bottomless Trap Hole or not.  Turns out that the game was horribly (and I mean horribly) imbalanced.

By drawing La Jinn the Mystical Genie of the Lamp before your opponent, you nearly guarenteed yourself a win.  Fissure, Dark Hole and Change of Heart can help you but those are 3 out of 50 cards.  Your only other options were to set useless defense monsters for La Jinn to destroy whilst your opponent can summon a monster each turn and swarm you.  Without much Special Summoning, you didn’t have the ability to counter them much at all.  Life point changing cards like Dian Keto the Cure Master and Ookazi really didn’t help you when you were getting attacked by two monsters, and single-tribute Normal Monsters just sat in your hand.

With the early sets (LOB, MRD, and MRL) out, it was still that basic beatdown format.  There was lots of easy removal, but it was mostly an aggro format where you try to get two monsters on the board and push for damage.  It was certainly fun but did not have much depth.

Let’s also look at the famous Chaos Goat Control Era (2005).  Looking at it closely, it wasn’t so impressive.  First, only Chaos decks really had a shot at being competitive.  If you didn’t run Chaos, you couldn’t win.  If you didn’t spend $50 on Black Luster Soldier – Envoy of the Beginning, you probably weren’t winning either.  There were a few Magical Scientist FTK’s (which I hardly would consider healthy for the game) that topped.  Most unique was a Beast deck which made use of Enraged Battle Ox’s ability to punish Scapegoat players, but that was the exception and not the rule.

Second, much like the Metal Raiders era, there was still a very simple formula for winning.  So, there were options to handle Chaos – just not enough.  Non-Chaos wins were anomalies.  You either ran Chaos or you were a noob.  Or perhaps, you were one of the idealistic players who had fun playing with your theme deck but had no chance of winning tournaments.  There wasn’t much variance amongst topping decks.  The Chaos decks were all of a very similar structure ; they all used 30 to 35 of the same cards.

That’s because most of the proportionately few good cards in that era didn’t leave you much of a choice.  Today we have choices like Pot of Duality versus Special Summoning.  Back then you just ran Graceful Charity because it was really good, had no downsides and there weren’t any better options.

Third and final point on this matter, lots of broken cards existed.  In a fun nostalgic reanactment duel, Delinquent Duo is fun.  Oh, no!  I got hit with a Deliquent Duo!  Haha!  But during the times where you actually paid money to enter tournaments and you were counting on skill to win you games, watching your opponent get the “holy trinity of card advantage” while you got a pedestrian hand was frustrating, and imbalanced.

The card pool was limited in the past, and there wasn’t much room to try totally new playstyles.  Now, in the Zexal era, on to the Arc V era, we are resource-rich and there’s much more room to accomodate a wider variety of playstyles.

The Beauty of Current Meta

We can always hate on the current meta due to our warm nostalgic memories, but in many ways it’s been a good meta.  Let’s even look at last format.  The top decks were HAT, Geargia, Bujin, Madolches, Fire Fists.  Evilswarms and Fire Kings werent too far around the corner. Even decks like Chain Beat could win tournaments.  Yes, there was the unruly Dragon Ruler format (which was really no more dominant than cookie cutter chaos was in its time), but overall, there’s been more diversity than ever.  Even today, the top deck may very well be Shaddolls but Burning Abyss and Satellarknights aren’t too far behind.

In a resource-rich environment with plenty of tech cards available, no matter how strong a new threat is (within reason of course), there’s always plenty of resources to handle them, which we will discover.  Vanity’s Emptiness, for example, the notorious $40 common, was practically unknown until Special Summoning (especially via Soul Charge) became extra popular.  Also, the Extra Deck is another improvement to the game.  At a fair -1 cost, you can get out a monster that will break you even or even plus with skillful play.  It takes luck out of the equation.

If you decide to over-extend and play 4 spell/trap cards, it’s not a matter of maybe the opponent might get lucky and draw Heavy Storm.  Its a matter of the opponent having Evilswarm Exciton Knight and choosing to use it if they wish.  Almost none of the big powerful Special Summoned monsters like (Beezle) is a problem, because there are ways around it such as Silent Honor ARK.  The fact that these cards don’t exist in the main deck takes the probability and luck out of the equation.  You can get it out early game but you don’t draw into it or brick your hand if you don’t need it for the situation.

In this game, there’s not really a trump (2017 update: lol) card that can beat everything anymore.  Every card has an answer that’s accessible with a fair cost.  There’s just so many factors you have to consider when building a deck and entering a tournament because there’s so many more options to succeed.  Which archetype will you play and thoroughly master?  What are your good matchups and bad matchups?  How will you gear your Extra Deck, for toolboxing or punishing the opponent?  Which of the many viable cards out there will be a part of your 15 card Side Deck? There’s just so many questions out there, and while the game may still have some flaws, its much more deep and complex than it ever was.

(2017 Update: In the original article, I ended with a little poem/rap I wrote when I was listening to a lot of Wu-Tang that day.  It makes me laugh with nostalgia as I reread it now.)

Back in the Day (Duel Monsters) by Baneful

I remember back in the day we used to play in the shade
Outdoors, we held our cards so they didn’t blow away
We took our decks everywhere – even buffets
No need to tribute for Blue-Eyes ’cause that was okay
Malevolent Nuzzler was a game-winning play
And cards like Hane-Hane were main-stays
One time I got 3 packs ’cause it was pay-day
I pulled Relinquished ; What an amazing day!
Though today Ritual Monsters are just child’s play
And who cares now? It’s a common anyway
Remember BLS? What an era! That’s all I’ll say
Then it got banned and things were not okay
Next, the Exceed’s and Synchro’s entered the fray
Some duelists decided to leave ; Others wanted to stay
I used to say I’ll quit (never did) ; Though someday I may
Won’t be surprised if I still play when I’m old and gray

Verse 2 is about to drop.
Witch targets, I got a lot.
Warrior Lady. Sangan, maybe.
What about a Yata lock?
If I set card face down,
Heavy Storm gonna rain down.
I’ll lose my cards and get swarmed.
So what should I play now?
No field advantage.
Only 2 cards in my hand
But I look at my graveyard.
I got something planned .
Remove a DARK and a LIGHT.
BLS continues the fight.
Pop. Pop. Double strike.
Decisive win tonight.
But cookie-cutter got stale,
So I played Water and Beasts
The more creative I got,
The more I strayed from my peak
Out of touch with the meta.
But even in my losing streak
I always looked forward to compete
In the tourney at the end of the week

Building decks in my head
Because I needed the practice
Was daydreaming in class
While I was planning my tactics
When bullies harassed
And things weren’t perfect at home
The comic shop was my safe haven
There I was never alone
Things got better ; I shaped my life
We’ve all grown
From keeping decks in our pockets
To rockin’ I-Phones
From Instant Message, to Myspace
And now it’s Facebook
From Photobucket, to Instagram, and Twitter
We’re hooked
From dueling tournaments
To shopping malls and Starbucks
From Dark Magician and Blue Eyes
To Utopia and Stardust
Cycles and patterns repeat
Some things never change
But people do
Yet duel monsters stays the same
From start to finish
From cradle to grave
From beginning to end
The story remains
Full circle.
We all won.
Good game.
Well played

Like the duels we had…
As I remembered them back in the day.