Home Featured Articles On the Shoulders of Giants: A Gameplay-Free Ikoria, Lair of Behemoths MTG...

It hasn’t actually been a long time since Ikoria: Lair of Behemoths came out. It just feels like it in the Magic world because we, as a fandom, spend way too much time on the internet. Our feeds get flooded with the latest breaking news, much of which isn’t actually relevant or interesting – in the context of Magic, there’s been a lot of “did you notice this interaction?” style stuff presented as something innovative. But there has been serious stuff too: cards getting banned, other cards getting changed, Arena being made even more confusing and being perhaps forever denied one of the most poignant paintings in Magic’s history . . . with everything going on, each day contains the same number of events that would once have filled three days. I don’t blame you for being fatigued. I am too.

But in a sense, that makes this a good time to take a gameplay-free look at Ikoria. That side of it is a little more settled, and we can think about its other elements without their being drowned in frustration about the companion mechanic or the new cycling or whatever else. And if any of us are still drowned in that frustration, it would do us well to remember that there is more to any set than just mechanics. 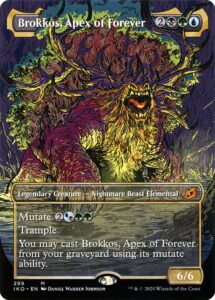 I’ll get right to the point: I think these are great. I think they’re great individually, because their style fits with the outright weirdness and alien-ness of Ikoria‘s monsters. It would have been an interesting experiment to do the entire set like this, although they might have had trouble getting enough artists who can do this style, and you never know what people will get tired of.

I also wonder if they portend a shift in Wizards of the Coast’s internal attitudes about art. We discussed a while ago that Squirrel Farm goes well with modern Magic art, in the sense of making more tokens more often, because a lot of the current artists have less immediately distinctive or distinguishable styles. Not that long ago, Magic’s makers wouldn’t have put cards like this in a set where every other card (including the default versions of these promos) had the usual style. I like this too. In a multiverse of infinite diversity and nearly infinite mystery, you wouldn’t – shouldn’t – expect everything to look the same. And it opens the door for us to letter-flood and ask for Rebecca Guay, Tony DiTerlizzi, and Ciruelo.

Of course, we can’t talk about Ikoria‘s promos without talking about the gigantic radioactive dinosaur in the room: Godzilla. 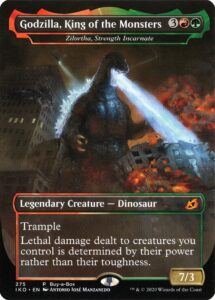 I was surprised that this was commented on as much as it was. It’s true that this is the first time that Magic has crossed over with another intellectual property in black-bordered cards – apparently the My Little Pony and Transformers Un-cards don’t count, because PTQ grinders will never accidentally see them at an event. And yes, Ikoria did come out notably close to both Monster Hunter World and Horizon Zero Dawn. But if you think this is Magic’s first meme set, you’re unfortunately mistaken. Both Innistrad blocks lifted elements directly from real-world horror stories and even movies, from Frankenstein and “The Shadow over Innsmouth” to Evil Dead. We’ve talked about this extensively in the context of Theros, too. You can’t avoid being influenced by other things – what matters is what you do with it, and especially whether people enjoy it.

Besides, it’s just good to have more than one interest. We’ve all encountered someone who’s dedicated to Magic to the point that a downturn in the state of Standard (or Modern, or whatever format) caused a deterioration in their mental state. It’s good to be serious about your hobbies, but it’s also important to have perspective – the world is a much bigger place than we’re often led to believe, and ideally, no one thing can entirely ruin it. Even just within Magic, they can’t prevent you from playing casually with cards that already exist; that, though, is a conversation for another time.

As someone who has more than one hobby, has some knowledge about popular culture, and also plays Magic, I will be watching where they go with the crossover concept. The idea of having an alternate name that refers to the crossover and an official name for the purposes of tournaments is one that seems obvious once it’s been done, and I marvel at the fact that none of us ever thought of it before. We already know that street racing is part of Kaladesh’s culture, and it would be very amusing to see Dominic Toretto and Brian O’Connor on the Buy-a-Box promo for Kaladesh‘s sequel. And I know that Mattel and Hasbro are competitors, but perhaps they could make a truce for just long enough to get Akroma portrayed by She-Ra . . . 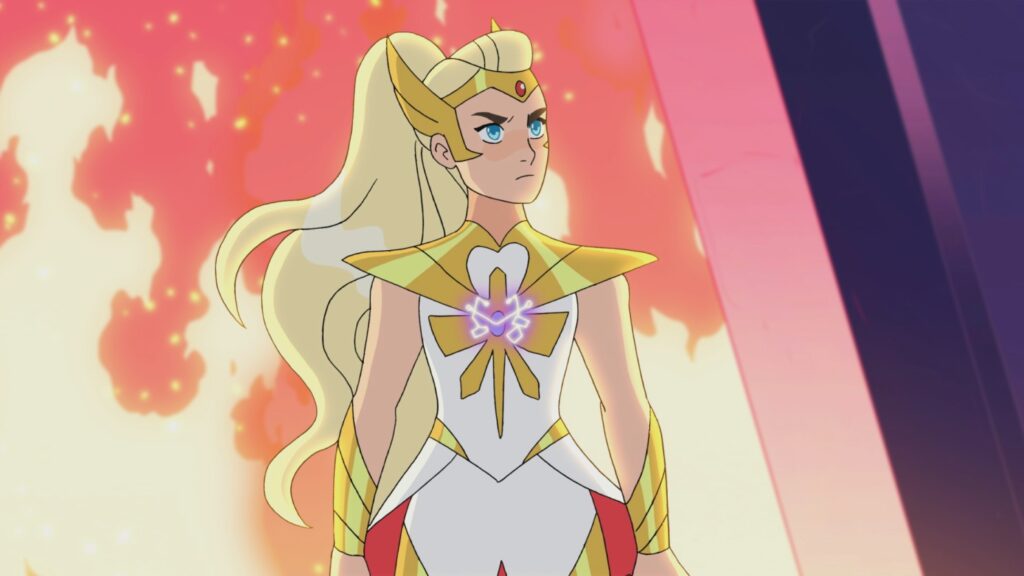 Last but not least, we need to talk about Zendikar. Ikoria, Lair of Behemoths is going to share part of its Standard rotation with Zendikar Rising, and when you describe the two planes in an overview manner, they sound surprisingly similar. Both of them are mostly wilderness, both of them have hostile weather patterns and dangerous wildlife, both of them have fraternities of human(oids) who build fragile refuges against the world’s hazards. This does concern me; I wonder how they’re going to look in a few years’ time when other worlds are more prominent and people try to think back on this strange era of Magic. Zendikar had the Roil and the Eldrazi ruins as a source of mystery – that story is now done, and the Eldrazi are no longer present. There are undoubtedly stories on that plane that don’t involve Emrakul, Kozilek, or Ulamog, just as our world is more complex than it first looks, but they’ll have to be pretty spectacular to stand out in a season of behemoths.