Home Featured Articles Across the Wine-Dark Sea: A Gameplay-Free Theros Beyond Death Review

On Instagram, I was recently waxing about a different lady knight, but Elspeth will always be one of my favorites too. As such, I took the story events of the first Theros block rather hard. I lashed out at Wizards of the Coast, their writers; even the cards themselves, which have nothing to do with the novella, designed as they are to be cast in planeswalker duels. It was on a smaller scale, but I reacted like a character from a Greek epic poem.

I don’t mean that as a good thing – quite the opposite, in fact. The central plot of the Iliad is initiated by a petty argument between Achilles and Agamemnon, which results in Achilles absenting himself from the fighting with the Trojans. In turn, this causes the death of Achilles’ companion Patroklos, and very nearly costs their side the entire war. The stakes were not as high in my attitude towards Theros, but I was cutting off my nose to spite my face, and costing myself a chance to do things I could have enjoyed. The fact is that Theros was and remains one of Magic’s coolest settings.

It is true and accurate to note that Theros sticks close to Greek mythology tropes and, like Eldraine, is less unique to Magic than a world like Mirrodin is. As we’ve noted in the context of Eldraine, this isn’t necessarily a downside of its style of worldbuilding; rather, it’s a testament to the degree to which classical Greek thought informs our sense of what is epic, what is tragic, and what is timeless. This is one of the things that makes the Theros sets very effective: you feel like you remember them, even if you’re seeing them for the first time. 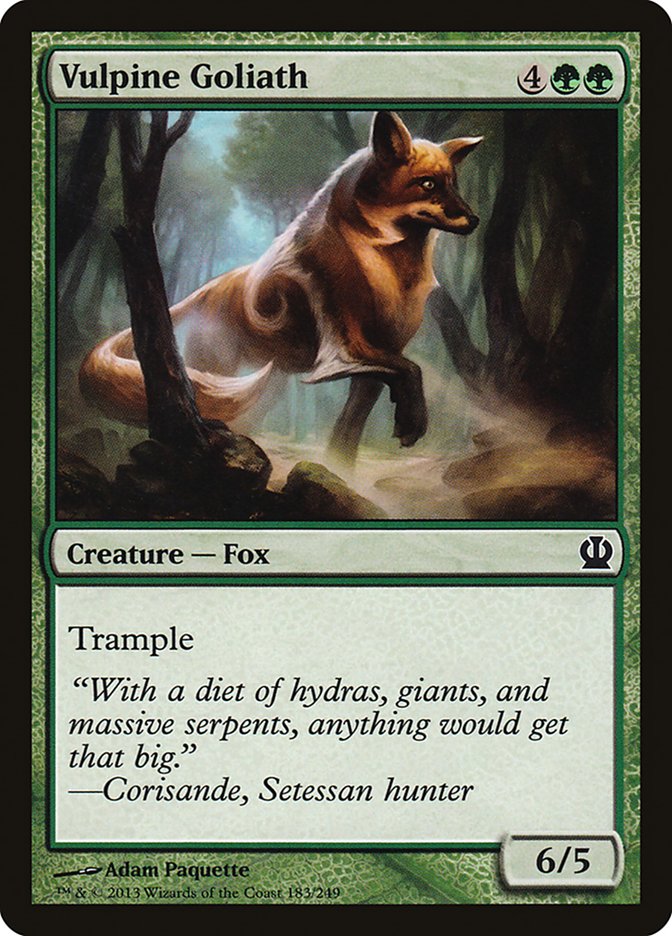 You could easily make a setting that feels mythic without using Greek names and visual elements, but you would inevitably end up drawing on the adventures, powers, and shortcomings of Greek gods and heroes, even if you didn’t refer to them as such. Sometimes it’s okay to just cut out the middle man, because a certain style of personal and place names will automatically put readers in the mood you want. This was what Robert E. Howard did with his Conan stories, picking real names and terms from the ancient world, from Scandinavia to the Near East to southern Africa to China. Conan turned out to be one of the pillars of modern fantasy, a fundamental influence on Dungeons and Dragons and thus an ancestor of Magic; we’re still talking about the Cimmerian sellsword almost a hundred years later.

Theros is, by all accounts, quite popular, and we’ll undoubtedly be seeing it many more times. The thing that remains to be seen is how well it works as a place to tell new stories: Greek mythology is foundational, but more distant culturally from the English-speaking milieu in which Magic exists. It is familiar, but not as intimate as the source material for Eldraine, and may not appeal equally to Magic’s audience in every era. That tends to be the fate of other popular culture properties based on Greek mythology.

This, in turn, brings me to another major influence on Theros: the God of War video games. While the sets don’t really have a macho, gravelly Kratos analogue, they do have striking vistas drawn from an exaggerated version of ancient Greece’s landscape, and cinematic battles where human warriors are massively outnumbered by monsters. In the original three-set block, this influence is mainly apparent in visual elements, but it truly comes to the fore in Theros Beyond Death.

Not only are the visuals perhaps more reminiscent of God of War – the bizarre physical appearance of creatures like Arasta and the Titans, the landscapes of the Underworld, the color and movement and head-on violence – but Theros Beyond Death takes a very different attitude toward the gods than its predecessor. Recall that in classical stories, the power gap between mortals and gods is insurmountable. You might argue with the gods, and you might resent them; you can even curse them and reject them. But you can’t defeat them, and generally you can’t even harm them. In one scene from Homer’s Iliad, Aphrodite is wounded by a spear, but she immediately flees the field and stops bleeding all with one thought.

The gods are only really threatened each other, but not always consistently. Again, the Iliad has some allusions to this. At one point, Zeus boasts about being more powerful than all the other deities combined. “Hang a gold cord down from heaven,” he suggests, “and all you gods and goddesses take hold of it: but you could not pull Zeus, the counsellor most high, down from heaven to the ground, however long and hard you labored. But whenever I had a mind to pull in earnest, I could haul you up, earth and sea and all – then I could hitch the cord round a peak of Olympus, so that everything was then left hanging in mid-air.” However, at a different point, there’s a seemingly contradictory story about a nearly-successful coup attempt by Hera, Poseidon, and Athena, so Zeus’ words may have included a dose of propaganda.

But Theros features gods who are much more like God of War‘s – very powerful, to a level beyond that of ordinary mortals, but far from invincible. They’re empowered by people’s belief and weakened by lack of belief, which is a common concept in modern fantasy; and like Kratos’ dysfunctional family, they’re vulnerable to the right kinds of weapons. Not only did Elspeth defeat both Xenagos and Heliod in open battle, we recently reviewed Kiora Bests the Sea God, and Ajani started a nascent Enlightenment with well-placed public addresses. Even allowing for the fact that planeswalkers are among the multiverse’s most exceptional characters, the gods of Theros don’t have a great record against mortals within the stories Magic has shown. 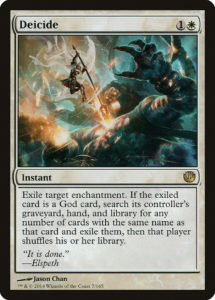 Where the Greek myths are often about accepting one’s fate and the fickle will of fortune, our modern interpretations of them encourage agency and proactivity. This is an important lesson too, particularly considering what our world can often be like. Without getting too far off the path, it’s apparent that even though we feel we no longer believe in hierarchical power structures, it’s still easy to become trapped by our social environment, and our own expectations and the expectations of others. These things can sometimes feel like a physical thing, if not a monster; such a monster is much harder to slay than those that are vulnerable to swords, but the rewards are even greater.