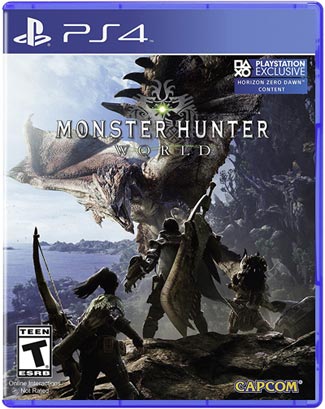 I was super excited to hear the game was coming back to Sony’s Playstation, and to the Xbox for the first time.  My personal review is based on the Playstation 4 version of the game.  I had pre ordered my copy from Amazon.com, where Prime Customers save 20%. That’s a no-brainer.  You also save 20% for up to two weeks after release.

I fired the game up Friday night and immediately downloaded the Day 1 patch, which took about 10 minutes.

Then a bit of pre-play slowness creeps in.  You have to design your character, which can be tedious because there are tons of options.  Then after you’re done, you have to design your Palico – your Pal Calico Cat.  Your Palico is kind of like Lego Robin to Lego Batman.  He does a little ping damage, distracts the monsters, or heals you, but it’s not much.  I simply tossed the controller to my daughter for 20 minutes while I walked to the fridge to get a beer.  After she crafted my Palico, I settled down to play.  One of my friends was texting me during his Palico set-up, and he was not happy.  Exact text message: “Can I kill my cat? Like immediately?!”  The cutesiness of the cats is not for everyone.

Being an experienced Monster Hunter player, I understand this game is all about hunting monsters, killing monsters and skinning monsters.  It’s even better when you have 3 of your buddies hunting with you online.  I was ready to hunt.  But the game starts you off with several cutscenes, trying to get you into some semblance of story.  I don’t know about others, but I find the story backdrop unnecessary, but it is what it is.

After all the set-up, and the cut-scenes, and walking around the starting village, you can finally hunt.  And you have to do your first hunt solo.  This will be easy for experienced players, but I can see newbies being overwhelmed.  There are 14 weapons to choose from.  There are tutorials for each weapon, but it takes time to master any weapon.

Once you complete your first quest/hunt, you are finally allowed to go online and play with your friends.  This is probably 1-2 hours of menial stuff before you can play with your buddies.  I guess you could shorten this by taking a default looking character and a default looking Palico, but you should be prepared to play solo for about 1-2 hours.

It’s finally time for Monster Hunter World to shine!  You might want to bitch during the set-up phase, but when the hunt is finally on, the game is golden!

For anyone who’s played Monster Hunter in the past, they know previous games were not quite open World.  Each map was broken into zones with paths, like so:

And the paths weren’t smooth transitions.  If you went from Zone 1 to Zone 2, there would be a brief delay while the hard drive and disc drive loaded the next zone.  It took away from the overall hunting experience.  When monsters got hurt/tired from fighting, they would leave simply leave the zone and go somewhere else.  Sometimes magically appearing several zones away.

This has all changed in Monster Hunter World.  The map is now completely open world!  You only have to wait about 5-10 seconds or so for the world to open up the first time you go into battle, and then gameplay is smooth with no more zone changes!  It’s a wonderful upgrade that old school hunters will truly appreciate.  And the open world is gorgeous to boot!  The environment you work within is very much improved over previous installments.

You simply can’t go toe to toe with large monsters either.  Fighting a monster is almost like fighting in Mike Tyson’s Punch Out.  That’s a ridiculous old school comparison, but old school players will get the reference.  You have to learn each monsters attack, like: how fast they move; how they bite; how they thrash their tails; how they charge; how they grab you in their claws; how they spit poison; how they breath fire; etc; etc; etc.  Once you learn their little dance, then you have to find openings for your attack.  Hammer player need to look for opening to the face and legs, while sword players might be looking a different opening to cut at their tail.  All in all, the hunt portion of the game is fantastic!

One of the fun things about Monster Hunter is that you gear up by making weapons and armor from skinning the monsters you kill.  You start off killing easy monsters and skinning them.  Then you take your loot to the blacksmith and pay him to make you gear from your prized skins, horns, tails, ore, bones, etc.  The blacksmith can make you weapons and armor, and make upgrades to existing gear … and even revert certain upgrades.  Armor obtained from the blacksmith also provides crucial bonus skills to help you fine tune your hunter.

Your new gear allows you take on tougher and tougher monsters … all the time rinsing and repeating and upgrading your gear.  I’ve always enjoyed this upgrade system in Monster Hunter, and it’s pretty similar to previous expansions.

Online multiplayer is like a little boy peeing – It’s all over the place!

For many people, the greatest joys in Monster Hunter are taking down magnificent beasts with 3 other online friends.  But Monster Hunter World does not making questing together easy whatsoever.  All four of you could be in the same stage of the game, and if you queue up for the same quest for the first time, the game might require you to break-up and do the quest solo.  It’s dumb as hell.  As of right now, any quest with a cutscene can only be done solo.  The only way to defeat this with your group, is that you all queue up for a quest solo, play it for like 10 minutes or so, until you see the cutscene and then abandon the quest.  Once everyone has seen the cutscene, then you can regroup and start the quest over.  This is stupid as f#@k and simply must be fixed.

The matchmaking system sucks too.  At one point over the weekend, none of my friends were online, and I wanted to group with random PUGS (pick up groups) so I used the MHW matchmaking system.  I kept getting thrown in with groups of players doing quests I wasn’t eligible for.  Either because the quest was too high of a level for me, or I hadn’t seen the cutscene.  I would requeue, and the same thing kept happening over and over.  Argh!

We also had trouble with the Monster Hunters Clan System.  In Monster Hunter World, clans are called “Squads”.  You can make a squad of your buddies, so it’s easier to group for quests.  This is a great idea, and your squad can hold 50 people, just like Clash of Clans.  But, this needs some work still though.  Only the Squad creator/leader can invite people into the squad.  This is tedious if you want to invite friends of friends into the squad.  And on Day 3, we had trouble getting into our created squads.  Everyone said they were inside our squad in voice chat, but none of us could see each other, or queue for squad posted quests.

Those are my biggest gripes with the online multiplayer right now.  But there are some good things.  Once you and your friends work out the bugs, and actually get queued for battle, things seemed to work well.  Playstation Chat worked well, and sounded great.  And multiplayers gameplay was smooth with no noticeable frame rate drops.

A nice upgrade from previous versions is the new Monster Tracking System.  In previous versions, everyone would spread out and run around like chickens with their heads cut-off until someone spotted the target monster and paintballed it.  Then everyone could see it on the map.

The new tracking system involves finding monster footprints on the ground, and recognizing them.  You’re recognition skill gradually gets better and better, and your scout flies eventually lead you to your target.  I think this is a genius and fantastic improvement.

Final Thoughts and Pros and Cons: 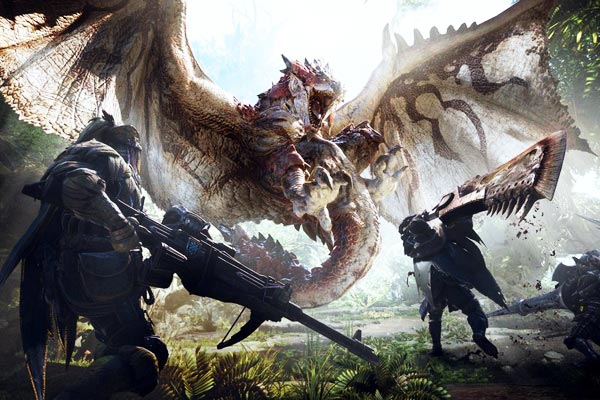 This is a game where my final score only matters to players that have never played Monster Hunter.  If you have already played and hated previous versions of the game, then Monster Hunter World is still not for you.

If you are on the fence right now, then use the Pros & Cons above to decide if this game is for you.  This game is really all about the thrill of the hunt.  Tracking and killing a tough monster for the first time can literally be an electrifying experience and fill you with great sense of accomplishment.  The fighting of a monster can be likened to a boss fight in a newer Zelda game, where you have to study the enemy’s movements, dodge their attacks and look for your openings.

If you are more into Turn Based RPG’s, then this might not be the game for you.

I do love this game, but there’s no way anyone should be giving this game a 10/10 right now.  The Online Multiplayer System is way too muddled at the moment.  Dedicated Hunters will clear a path through the disorganized brush, but they shouldn’t have to.