So what do they bring to the Magic tables? More than just nostalgia, as it turns out. On the most basic level, a creature that brings a token with it is always worth looking at, particularly when the total power to cost stat is good (and Minsc’s is). 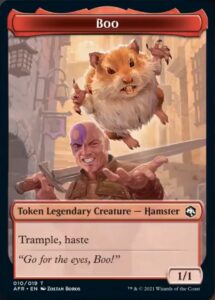 There are also plenty of tricks you can do with his ability: even just using it as a mana sink is far from bad, given how good these colors tend to be at generating lots of mana. He’s also in the same colors as the various cards that care about having creatures with four power or greater, letting you trigger them almost at will.

And on top of all that, Boo is a token with flavor text. How cool is that?

Maybe if they do another Forgotten Realms set at some point, we’ll also get Edwin or Jaheira?

Everyone’s favorite ranger and “miniature giant space hamster” join the fray in Adventures in the Forgotten Realms; on their own, Minsc and Boo represent 4 power and toughness for 3 mana, which isn’t half bad! Boo represents the first Hamster in Magic, which suggests that each color has an associated rodent with it and that we have yet to see the blue rodent. But that’s for another day, and Boo does have haste (which isn’t bad).

Minsc’s other ability helps to accentuate the “giant” part of his friend’s lineage; it can be aimed anywhere, and it modifies their power and toughness for one turn. Notably, this is also a sorcery-speed sacrifice outlet, which I’m sure is far more interesting to some decks (like Atla Palani combo). On its own, though, it lets you make Boo more able to go for the eyes; with no abilities of his own, Minsc probably wants to sit back and let his friend do the deed more often than not, and Boo having trample certainly helps! I suspect Minsc is more likely to make appearances as a combo piece, thanks to his ability, but he’s a fine “fair” card if you can support him.

Constructed: 3.5 (depends on if he has a home he slots into, which is unclear, but he can break board stalls)
Casual: 4.5
Limited: 4 (one of only two cards that’s more than two colors in the set if I’m not mistaken, Minsc might be a hard sell, but he’s certainly potent if you can get him on board)
Multiplayer: 3
Commander: 3.5