Lost Cities is a Card Game designed for 2 players. The game is intended for players ages 10 and up, and plays in about 30 minutes.

The original version of the game was released in 1999 and has sold over 1/4 million copies.  The object of the game is to make profitable expeditions to the Lost Cities in the remote corners of the world (the Himalayas, the Brazilian Rainforest, the Desert Sands, the Ancient Volcanoes and Neptune’s Realm).  Okay, none of that stuff really happens in the game, but it makes for a great story, doesn’t it?!

Lost Cities is simply a cool, competitive card game that is very easy to teach and simple to learn.  But Lost Cities requires some good masterminding to defeat your opponent.

Here is an image of the Lost Cities version that released in 1999:

Lost Cities is simple, yet very competitive game.  The game has a Solitaire feel to it.  Solitaire has 4 suits of cards – Clubs, Spades, Hearts and Diamonds.  The 1999 version of Lost Cities had five suits of colors – Red, Yellow, Green, Blue and White.  In Lost Cities, Two players are basically playing a competitive game of Solitaire.  Each player tries to get colors (suits) of cards in sequential order on their side of the board.  And, at the end of each round, each player earns points for the cards they placed on their side of the board.

The old version of the cards had an antiquish look:

Let’s have a look at the new version of the game.

According to the back of the box: “Two explorers embark on research journeys to remote corners of the world: the Himalayan mountains, the Central American rainforest, the Egyptian desert, a mysterious volcano, and the bottom of the sea. As the cards are played, the expedition routes take shape and the explorers earn points. The most daring adventurers make bets on the success of their expeditions. The explorer with the highest score after three rounds of expeditions wins. The rules of the game are simple, but beware: The lost cities hold many unseen mysteries!”

The cards actually make a mural when laid side-by-side.  This has absolutely nothing to do with gameplay, but it looks pretty cool.

The goal of the game is to score the most points.  The game is played over 3 rounds.  Each round takes about 10 minutes.

There are great instructional videos on YouTube for detailed gameplay.  The original base game only uses 5 expeditions (5 colors).  The advanced game adds in the 6th color, which adds some length to the base game.  For the base game, you shuffle the 5 base colors (not purple) together along with the 15 matching color wager cards.

Basically, on your turn, you simply play a card, and then draw card.  That’s it.  That’s all you have to do on your turn.  Seems simple enough, right?!

During your turn, you must play one card from your hand.  You either place the card on the discard pile board (the game board), or place it sequentially on your side of the game board.  Then you must pick up a different card from the game board or the Draw Pile.

If you place a card on your side of the board, you must play the cards in a columnar fashion, and the cards must be sequential as seen above.  You only get one column per color.  If you can’t play a card in a sequential order (or don’t want to for strategic purposes), then you must discard a card to the middle game board.  This makes that card available to your opponent.

Your end-of-round scoring will be based on the points on each card.  There are also Wager Cards.  Wager Cards must be the first card/s (top card) in a column.  Each Wager card will multiply the result of each column by 2, 3 or 4 respectively.

End of the Game – The game ends as soon as a player draws the last card from the draw pile.

Scoring – Scoring requires a little math. When the game ends, each player’s columns of cards are scored. To do this, tally up the values of all cards in a column. From each columns’ sum, subtract 20 points for the cost of that columns’ expedition.  So some columns might actually earn you negative points!  Negative points are not given to colors you have ignored.  If you didn’t play any red cards, you score 0, not “-20”.  You also get a bonus of 20 points if you have a column of 8 cards or more.

If after three games you have the highest overall score, you win.

I know the scoring sounds a bit difficult, but it’s actually very simple once you get the hang it.  There is an excellent scoring example in the rules:

The box and components are nice.  It’s a nice, small and tidy little package.  The cards and the game board are on good quality stock paper, and everything fits back in the box nicely.  Card colors are great, and numbers are easy to read.  Each card has unique apart from the other cards in the set, and the artwork pertains to the theme for that color.

There is a nice little rulebook.  The rulebook is in full color, and explains the game perfectly.

The game is actually very strategic.  The game looks easy, but is deceptively calculating. There are many times during the game where you will NOT have a good move, yet you will have to let go of a card in your hand.  Tough decisions are at every corner: 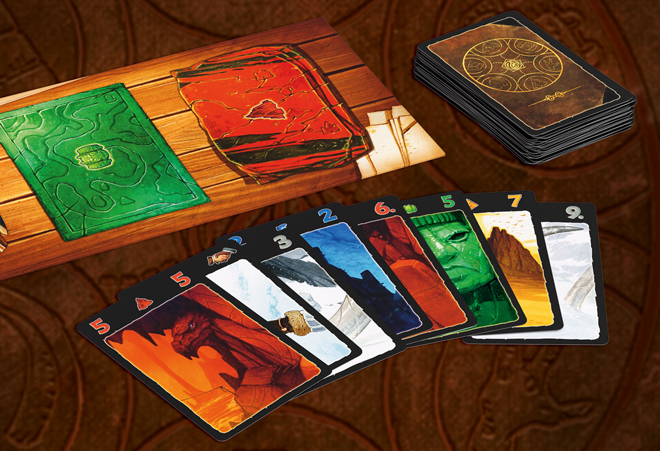 Luck.  Like many card games, you can get dealt bad hands.  And you may continue to draw cards you don’t want from the draw pile.  You will have to make the best of a bad situation and muddle through.  Over the course of 3 rounds, your opponent is bound to suffer through the same bad beats as you, so the game should even out over 3 rounds.

This a fantastic little game and an easy recommendation for your gaming library.   It may look simple and random at first, but there is a lot of strategy and planning here in this small little package:

The game can be a nail biter at times.  You may have finally obtained a great run cards in your hand to play, and you want to play those cards down in front of you, but the Draw Pile might be running low.  You can draw your cards from the center board in order to keep the Draw Pile alive longer, but your opponent might catch on to your strategy and will probably keep drawing their cards from the Draw Pile in order to kill your plans, and try to run you out of time.

The back of the box shows game attributes as on a 1-5 scale:

I agree with their assessments for these attributes.

This little two player game has sold over 250,000 copies for a reason – It’s simply an a amazing game.   It’s fun. It travels well.  It plays quickly.  It works your brain the entire time.  And you can pick this great game up at a wonderful price point.  Highly Recommended!