Hello readers, Vince here, and I’m looking at another Break Evolution: Hydreigon Break (XY Steam Siege 87/114)! Hydreigon in the games is regarded as a good special attacker in UU while in the TCG, there are a couple of good cards that did see play during its time. As for this post, however, I’m looking at the TCG aspect of Hydreigon, and strictly so. This card was reviewed February 1, 2017 as a regular review, and opinions were mixed, but understandable. Even though I wasn’t here at the time, at least I will make up for it.

Being a Break Evolution of a Stage 2….seems like a personal challenge for you to overcome if you really want to use a particular Pokémon. It takes four cards from your deck and takes fours turn to evolve completely outside of Rare Candy and Wally. You also worry about cards that do more harm to evolved Pokemon: Glaceon EX can wall with the effects of Crystal Ray; Shining Jirachi’s Stellar Reign strips the entire Evolution line down to Deino; Espeon-EX also devolves, but one stage at a time. Some of the counters regarding Break Evolutions include Giratina XY Promo 184, whose Devour Light shuts down all abilities from Break Evolution, including ones from below; Starmie Break’s Break Star does 100 damage to opponent’s break Pokemon in play (which is 2HKO on others and OHKO on Delphox Break). Looking past aside from common hurdles, when you do get the pieces together, it is a Dragon type (which won’t hit any Pokemon exploiting weakness outside of BW-era dragons) with 190 HP (highest HP of a Break Evolution), and adds an attack. All other attributes will be carried on such as Abilities, Attacks, Weakness, Resistance, and Retreat Cost. Calamity Blast costs PDDC and does 150 damage, and 50 damage to 2 of your opponent’s Benched Pokemon. You must discard 3 energy from this attack. Potentially a total of 250 damage on the board for four Energy is good, and discarding energies (although it seems bad due to losing resources) means Gardevoir GX or other energy-punishing users won’t be able to hit too hard. All-in-all, I consider Hydreigon Break to be a good add-on card.

The review won’t be complete without addressing all Stage 2 Hydreigon cards. There are two Standard legal options for Hydreigon. Hydreigon (XY Steam Siege 86/114) is a dragon type with 150 HP, weak to fairy, and a retreat cost of 3. Cruel Fang costs CC for 40 damage and soaks up 40 damage before applying Weakness and Resistance. Dark Burn costs PDC and does 50 damage times the amount of dark energy you’ve discarded from your Pokemon. It’ll take five discards to reach OHKO anything territory, and that’s asking a lot. I don’t think this card would help Hydreigon Break at all. I would rate this 1.5/5 on standard and expanded.

Hydreigon (SM Crimson Invasion 62/114) was reviewed on December 8, 2017 and this card was featured in the Destruction Fang theme deck. It is a Dark type with 160 HP, weak to Fighting, resists Psychic, and a retreat cost of 2. It’s ability, Weed Out, makes you choose three Benched Pokemon of yours and discard the rest. Pretty tricky to meet because you would have to have more than three benched Pokemon to trigger the effect. Even then, this is still useful to get rid of Pokémon who already served their purpose and/or get a damaged Pokemon away from play, keeping opponents from picking off that Pokémon for an easy prize or two. Dark Destruction costs DDC for 120 damage and you may choose to discard an energy attached to this Pokémon. If you do, you get to discard an energy from your opponent’s Defending Pokemon. Good for setting back a turn or two, but means nothing against Pokemon with unlimited energy acceleration. I had slightly overrated this card. I would’ve rated 2.5/5 on both formats.

Expanded has several other Hydreigon cards. Hydreigon (BW Noble Victories 79/101, BW Next Destinies 103/99) is a Dark type with 150 HP, weak to Fighting, resists Psychic, and a retreat of 3. Its ability, Dark Aura, turns all units of Energy into Dark energy. So Double Colorless Energy which originally provides CC would be DD, same for Counter Energy, etc. Berserker Blade costs DDDD for 60 damage, and 40 damage to 2 of your opponent’s Benched Pokemon. This attack would be a weaker Calamity Blast without the discard. The damage being distributed is nice, but overall damage output is very low. Even with tricks to boost damage output, you’re still looking at 3HKOs. Oh, and the ability means that you’ll never get to meet the attack cost of Calamity Blast, since that lone Psychic Energy will turn into Dark Energy no matter what. Which regulates Hydreigon BREAK to changing from being a Dark type to Dragon type and an increase of HP. This card was reviewed in Pojo at March 8, 2012, when it was a secret rare. I would rate this 2/5 on Expanded.

Hydreigon (BW Dragons Exalted 97/124) is a dragon type with 150 HP, weak to Dragon, and a retreat cost of 3. This card was the 2nd best card of the set. Dark Trance ability lets you move dark energies around. This ability is notoriously good for conserving energy cards and can combo with Max Potion to flush all damage without the discard penalty. DragonBlast (attack name based on the Japanese expansion set BW5) costs PDDC for 140 damage, and a two dark energy discard. You can improve it with Devoured Field and Muscle Band, and 170 will OHKO almost all non-GX Stage 2s, and some lower-end Basic EX/GX Pokemon. I would rate this 3.75/5. 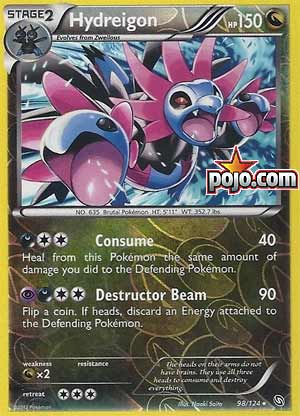 Hydreigon (BW Dragons Exalted 98/124) was reviewed on October 19, 2012 and this card was featured in a theme deck called DragonSnarl. It is also a dragon type with 150 HP, weak to dragon, and a retreat of 3. Consume costs DCC for 40 damage, and you heal the same amount of damage that you did to the Defending Pokemon. Destructor Beam costs PDCC for 90 damage, and has a 50% chance of discarding an energy from that Defending Pokemon. Both attacks are underwhelming although I’m more interested on that Consume attack. If you can ramp up the damage output with, say 4 Altaria with Fight Song ability (which lets Dragons do 20 more damage, and it stacks), Devoured Field, and a Choice Band, Consume would now do 160 damage while healing 160 damage! Wishful thinking aside, that is too much to ask for. I would rate this 1.25/5 on Expanded.

Hydreigon (BW Plasma Freeze 78/116) was reviewed on June 26, 2013. It is a Team Plasma Dark type Pokemon with 150 HP, weak to Fighting, resists Psychic, and a retreat of 3. TractorBeam costs DCC functions like Gust of Wind/Lysandre while smacking the new Pokémon by 40 damage. That attack could throw your opponent’s setup off! Obsidian Fang costs DCCC for 80 damage and discards all Pokemon Tool cards from the Defending Pokemon. Since I can’t think of any ways to use this card, I would rate this 1.5/5 on Expanded. 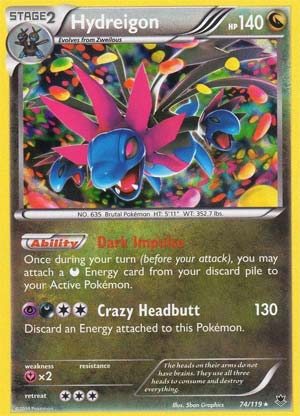 And finally, Hydreigon (XY Phantom Forces 74/119) was reviewed on January 19, 2015. It is a dragon type with 140 HP, weak to Fairy, and a retreat cost of 3. Its ability, Dark Impulse, puts a Dark energy from the discard to your Active Pokemon. It’s an ability that constantly works if you run out of Dark Patch or can’t afford to use up an attack to recover energies. Crazy Headbutt costs PDCC for 130 damage with an energy discard from this Pokémon. Not so menacing on the attack, though that can still 2HKO anything. I would rate this 3.5/5.

So after looking at available options, you might wonder which ones are worth using. If you want to use Hydreigon Break, then the Dragons Exalted 97/124 and Phantom Forces 74/119 are the way to go. If you have at least three Hydreigon with Dark Impulse, you could actually get back those energies needed to use Calamity Blast turn after turn. Meanwhile, with Dark Trance in a 190 HP Pokemon that gives a single prize, you have yourself a bulkier energy trans Pokemon. I cannot find any tournament placings regarding this card, so looks like I would have to make some deck ideas to give you an clue on how to use Hydreigon Break, as least for the Expanded format. I’m at a loss on how to use it in Standard.

So far I can think of two ways to use it. You could use the Break with 4 of PHF 74’s Dark Impulse abilities. Add in a Smeargle (XY BreakThrough) to swap a basic energy for another basic energy card, and you can get a single Psychic energy back to meet the attack cost. You’ll need to set up fast, or otherwise your evolving Pokemon will be continuously getting attacked. This deck revolves Hydreigon Break as a main attacker. Another idea would be to use both the DRX 97 and PHF 74, as well as some partners such as Darkrai-EX (both DRX 63/108 and BKT 74/122). The setup may seem clunky, but it opens up for more operation. Darkrai-EX DRX 63 has Dark Cloak which enables free retreat for Pokémon wit dark energy; Hydreigon DRX 97 moves dark energy around; Hydreigon PHF 74 recovers dark energy, and Darkrai-EX BKT 74 has an attack call Dark Pulse that does 20 plus 20 more for every dark energy attached to all of your Pokemon. Throw in some Max Potion for recovery, Devoured Field to boost damage for both Darkrai and Hydreigon, Double Dragon Energy to boost Dark Pulse even further and meet attack costs from Hydreigon, and other sources of draw power, and you’ll have a complete package that is ready to battle! For this second deck, due to Dark Pulse being the star of the show, it’s hard to keep spamming Calamity Blast and is best for emergency use.

Because of good options that supplement Hydreigon Break, it may have some chops in Expanded, but not so much in Standard. Why? Because there are no worthwhile Hydreigon cards to use in that format. Expanded contains cards from Black and White onwards, and whether success it may have regarding Hydreigon cards in the past will still be good to use in this present day era. In Limited, Hydreigon Break isn’t too shabby, easily spamming just Cruel Fang to deal damage and soak hits. At 190 HP taking 40 less damage before factoring weakness, this means fairies will need to have dealt 140 damage to land the OHKO (140 minus 40, then times it by 2). Calamity Blast or Dark Burn should be reserved as a finishing attack. Of course, being a Break Evolution of a Stage 2, it’ll take four turns to hit the field, and during that time, your evolving basics can’t do much to fend off other cards from the Steam Siege set. Obliviously, the pre-releases of Steam Siege is long gone, so you won’t be able to enjoy it anyways.

Conclusion: Hydreigon Break adds an attack that is better than other Stage 2 incarnations (based on available Hydreigon cards). Unfortunately, this would mean that their attacks from their Stage 2 counterparts would almost never be used. Assuming you use those cards, it would revolve having either Dark Trance & Calamity Blast or Dark Impulse & Calamity Blast. Having another card which fixes the problem may slightly elevate this card to be borderline playable, though one might wonder why Stage 2 Hydreigon cards didn’t have a good enough attack in the first place so that its Break Evolution won’t have to be tacked in. The scores may be misleading, since that reflects how Hydreigon Break would operate (various support plus focusing on Calamity Blast) and not based on tournament finishes (which didn’t have any anyways).

*When XY Steam Siege was released, the format was still XY-on. Cards in Steam Siege were allowed in 2016 Worlds. During that time before rotation, with about three weeks left to enjoy, any player would’ve taken advantage of both Hydreigon Break and PHF 74 to perform what I’ve just mentioned on the first deck idea. I would’ve rated this 3/5 in Standard when it first came out. But after September 1, 2016, it would be 1.25/5 just like now.