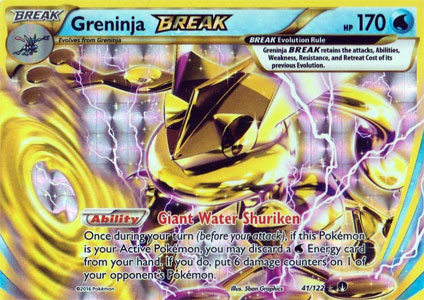 Hello readers! Vince here, and here I am taking a look at Greninja BREAK. I may have missed both reviews from March 2016 as a regular review and the second best card of 2016 on the Pojo Pokemon Archives, but it’s better late than never. Maybe another review on Greninja BREAK would be in the top X cards lost to rotation 2018, but only time can tell. I was thinking of reviewing this with 39/122 and 40/122 breakpoint version, but I was going to cover other Greninja options anyways.

Greninja BREAK is a card that impressed me so much that, despite some hurdles to overcome, has seen much success in a variety of tournaments during the card’s lifespan in Standard. Sure, rotation has taken out some cards, but the deck was able to adapt to its environment. Greninja BREAK is a Break Evolution of a Stage 2, meaning you’ll need four cards to complete the evolutionary line outside of Rare Candy and it takes three turns to manually evolve Froakie one stage at a time. When you get all the pieces together, it becomes a water type with 170 HP while retaining the weakness, resistance, and retreat cost of its Stage 2 Greninja card. Weakness was Grass most of the time (sans XY24 promo whose weakness is Fighting), no resistance most of the time (again, sans XY24 promo, which has Psychic resistance), and a retreat of either zero or one depending on the card (so far 40/122 breakpoint has free retreat, other Greninja cards were one). That one retreat cost can be eliminated via Float Stone or Escape Board from SM5.

No matter which Greninja is underneath the break, it carries an ability called Giant Water Shuriken, which works when Greninja is on the active position. This ability has you discard a Water Energy from your hand and put six damage counters on one of your opponent’s Pokemon. 60 damage on any Pokemon is very potent, this could OHKO very small evolving basics with 60 HP or below. Even is OHKOs are not the case, the amount of damage inflicted via ability can aid Greninja to use its attack to finish that Pokemon off. This ability can stack if you have more than one Greninja Break; simply switch/retreat that Greninja break to another Greninja break to use that ability again. 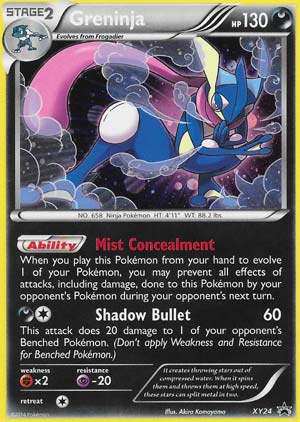 So which Stage 2 Greninja to use? Well, your standard option is the 40/122 version, in which it is a Water type with two attacks, 130 HP, weak to grass, and free retreat. Shadow Stitching costs C for 40 damage, and the effect works like Hex Maniac, shutting down your opponent’s Pokemon from your hand, in play, and in the discard pile until the end of your opponent’s turn. Moonlight Slash costs W for 60, plus 20 more if you return a W energy from this Pokémon to your hand. 80 for one Energy is awesome value, and by returning that Water Energy from this Pokémon to your hand means you could optionally launch Giant Water Shuriken on your next turn! If I were to rate this card, I would give it a 3.5/5 in Standard and Expanded. Even without Greninja Break, 40/122 is still a good efficient attacker. Another Greninja that’s allowed in Standard is the XY162 promo. Won’t go too much in detail, but Aqua Shower has a nice spread attack for one Energy (doing 20 to each of your opponent’s Pokemon).

Expanded has three other Greninja cards: XY Kalos Starter set, XY 41/146, and XY 24 Promo. The one from the starter set isn’t worth using, even with higher HP of 140 and a cheap attack of Mat Block, which did 40 for W. XY24 isn’t ideal to break evolve from, since that’ll make that Greninja change from Dark to Water type, and it’s attack cost of DC makes the energy count less ideal to make room for Darkness Energy. So that leaves with XY 41/146. This one has an ability and an attack. Water Shuriken is the small version of the Break’s ability, discarding W energy while doing 30 damage, but can be on the bench using it. This was used alongside the breakpoint 40/122 version to snipe low HP Pokemon as well as rack up the damage to set up future KOs. This was important to taking out Night March Joltik, Robo Substitute, Propagation Exeggcute, or Shining Mew, since these have 30 HP. Mist Slash does 50 for W while ignoring Weakness, Resistance, and other effects on the Defending Pokemon. 50 for one Energy is great, but not being able to exploit weakness makes the attack weaker. I’m not sure if this version still sees play, maybe because the snipe damage is not efficient enough (hence why Giant Water Shuriken is more efficient) and a retreat cost of one makes unnecessary discards a pain to deal with. Every Water Energy in your deck matters when facilitating careful usage of Giant a Water Shurikens and their other one Energy attacks. I give the 41/146 version a 3/5 on both Standard and Expanded; still a good card but crowded out of other options.

I might as well mention Frogadier from 39/122 breakpoint. It is a water type with 70 HP, weak to grass, and a retreat of one. It’s only attack, Water Duplicates, costs W and it gets three Frogadiers from your deck to your bench. With four Frogadiers in play, you can evolve them next turn to Stage 2 Greninja with the help of Dive Ball or other consistency search card, if those Frogadiers still survive. I don’t think any snipe damage can OHKO multiple 70 HP Pokemon (Vikavolt-GX’s Gigatrom GX comes close). This attack helps deck thinning as well as having more opportunities to evolve them. I would still use a Rare Candy or two in case other Frogadier cards are prized.

So with the available options out of the way, let me recall how Greninja Break has been used. I can think of four variations of Greninja Break. The first variation is using Greninja with Octillery and a couple of Pokémon with the call for family attack. Dedenne from XY Furious Fists and Skarmory from XY Roaring Skies are examples of Call for Family options. Stage 2 Greninja were often a split of 41/146 and 40/122, maybe as a 1-3 or 2-2. Octillery was there for its constant ability to draw more cards. 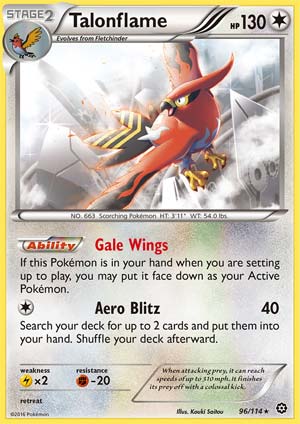 The second variation is using Greninja with Talonflame. With very little room for other Pokemon (the Greninja line was 4-4-4-3), we have a Pokémon which fills the gap. Talonflame (Steam Siege) was the best starter Pokemon in its time. It’s a Stage 2 colorless Pokemon with 130 HP, weak to Lightning, resists fighting, and a free retreat. But wait, shouldn’t there be a fletchling in there? This is true, but Talonflame’s Gale Wings ability allows this Pokémon to be on the active spot before starting the game. So with four Talonflames and 3/4 Froakies, you could start the game with a Talonflame 57%/50% of the game. It’s attack, Aero Blitz, costs C for 40 damage, with the addition of searching your deck for two cards and put them into your hand. The ability and attack is why Talonflame is the best starter Pokemon for Stage 2 decks. Of course, if you didn’t start with one, or even if you did, that’s three or four dead cards for the rest of the game. You could break evolve into Talonflame BREAK, which makes it change from Colorless to Fire type with 170 HP. Even without Flare Blitz, Aero Blitz can now enjoy hitting grass or metal Pokemon for weakness. The risk is even greater of having FIVE dead cards in your deck if you didn’t start with one.

The third variation is using Greninja BREAK with Starmie (XY Evolutions). The purpose is to retrieve energy cards via Space Beacon ability, in which you discard a card from your hand in order to retrieve two Basic energy cards from the discard pile to your hand. Works just like the pre-errata Energy Retrieval. Though using a Break Evolution and a Stage 1 may hinder consistency (being forced to start with Staryu instead of Froakie), but that enables you to break even in energies when using Giant Water Shurikens and not rely too much on Energy Retrieval or Fisherman (although you may need them in case Starmie is knocked out or not present).

The fourth variation is using Greninja Break with Espeon-EX. Sounds weird, but the purpose is to put damage on Pokemon and then devolve that Pokémon down by one stage. So if you had Sylveon-GX has 140 HP remaining and you devolve down to an Eevee (Sun and Moon), that Eevee is knocked out due to damage equal or exceeding its max HP. This strategy could prove troublesome for Stage 1 Pokemon and Stage 2 Pokemon that skipped the Stage 1 via Rare Candy. When damage is placed correctly, you can achieve multiple knock outs by devolving.

Greninja BREAK has flourished over the years (2016 and 2017), and time will tell what Greninja BREAK is going to achieve in the year of 2018 before it retires from Standard. This is still a popular deck to use in Standard and Expanded given those modification that people make for this deck. The caveat of Greninja BREAK is taking 1/4 of deck space while dealing with some cards that are prized and not setting up quickly enough to wreak havoc. There’s even new threats like Sylveon-GX undoing your setup with Plea GX and Po Town which inflicts damage every time you evolve your Pokemon (in the case of Break Evolutions of a Stage two, that’s a whopping 90 damage you would take). However, its advantage stems from being worth a single prize, having very cheap attacks so that Greninja isn’t vulnerable to other Pokemon that punishes your Pokemon for having too much energy loaded in one Pokemon (Gardevoir GX needs six energy to OHKO the break), and having free retreat to launch multiple Giant Water Shurikens in one turn (right now, it would be three or four times; use ability, retreat, use ability, Guzma, use ability, switch via item, use ability). In Limited, it may be hard to pull the entire line, but if you do, the opponent would probably forfeit the moment you Break evolve into Greninja Break. Between ability based snipe and powerful cheap attacks, your opponent cannot respond to this strategy in a timely matter (One use of Giant Water Shuriken and Moonlight Slash totals 140 damage). However, Froakie and Frogadier cannot do damage at all, so it’s important to set up your Pokemon and evolve as soon as possible.

Conclusion: This is probably one of the longest reviews that I’ve made with 10+ paragraphs, but such a lengthy review is warranted because Greninja BREAK has a good history of its usage. Many good cards formed to be a stronger deck, and when you compete at the highest level, you will need those pieces to pull forward. If I were to review those cards in the past, I would personally rank Greninja BREAK as my second best card of XY BreakPoint and second best card of 2016.