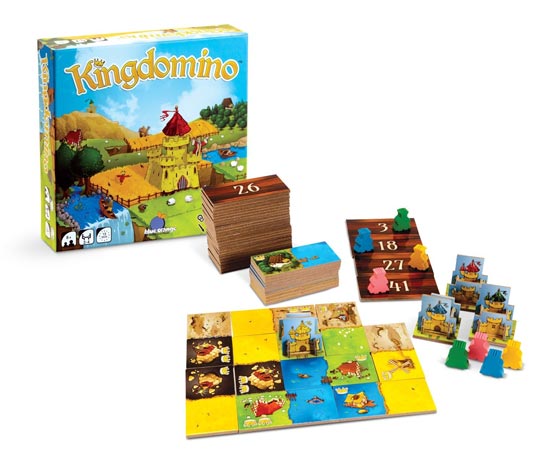 Kingdomino is a board game that every gaming family should own.  If the best games on your family’s gaming shelf are Monopoly, Uno, Life and/or Trivial Pursuit, then it’s time to upgrade your collection.  And Kingdomino is a great place to start.

So what is Kingdomino?

Kingdomino is an upgraded version of the old game – Dominoes.  If you don’t know what a Domino is, maybe you’ll recognize the one that Domino’s Pizza uses in their logo.

I’m not sure if kids even know how to play Dominoes anymore, so here’s a rough intro to Dominoes: Dominoes is a tile-laying game that’s been around for hundreds of years.  Players take turns matching ends of their pile of Domino tiles to Domino tiles already in play.  If you have a domino with 2 pips (2 dots on it), you can only match it to another Domino in play with 2 pips.  You basically try to play as many Dominos from your hand as possible.

In Kingdomino, the dots/pips have been replaced with a variety of landscapes/terrains.  You have six different landscapes that replace all the dots in Dominoes: Water; Forests; Mountains; Wheat Fields; Swamps; and Grazing Lands.  Below is an image of 6 Kingdomino tiles representing all 6 types of terrain in the game.

Object of the Kingdomino

To Connect your dominoes in order to build a 5×5 grid to score the most prestigious Kingdom of all! 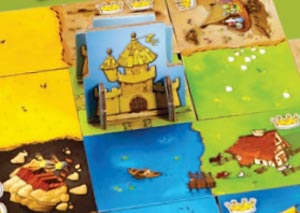 Kingdomino is played with 2 to 4 players.  Each player starts with a 3D castle.  This 3D castle is wild.  Any landscape can connect to the castle.  Each turn, players connect one new domino tile to their existing kingdom, making sure at least one of its sides connects to a matching terrain type already in play (or the 3D Castle).  You continue to build your kingdom until you have a 5×5 grid (if you’ve planned well).  Your Kingdom cannot exceed a 5×5 grid.  And your 3D castle does not have to be in the middle of your kingdom.

There are a total of 48 Dominoes in the box.  You would use all 48 tiles in a 4 Player Game.  The tiles are two-sided.  One side of the domino has a number on it (ranging from 1-48); the other side is the terrain.  Lower numbered tiles are generally less valuable at the end of the game than higher numbered tiles.  Players will take turns drafting one tile each round and add it to their Kingdom.  The player who drafted the lowest numbered tile the previous round, will have first pick in the next round’s draft.  This makes drafting fun and fair.

End of the Game:

When players have a 5×5 grid in front of them, the game is over.  If due to bad planning, you can’t fit a tile into your kingdom, that tile is discarded from play.

Scoring is relatively simple.  The game calls it “Prestige”.  Each kingdom is composed of different “Properties”.  Properties are groups of similar type landscapes that are touching each other.  Some landscapes have crowns on them.  Each property in your kingdom will give you as many Prestige Points as the Number of Squares multiplied by the Number of Crowns appearing on the property.  So a property without crowns awards you zero points.  The player with the highest Total Prestige score wins the game.  Below is a scoring example from the rulebook:

Pros and Cons of Kingdomino:

This is an easy game to recommend to everyone.  The price is right and doesn’t break the bank at its $19.99 retail price.  It plays quickly and is easy to teach.  It’s a great game to teach to non-gamers.  I feel this this is a game that every gaming family should own.  Make room for this one on your game shelf!  This game has been rated 5 out of 5 on Amazon.com as well!