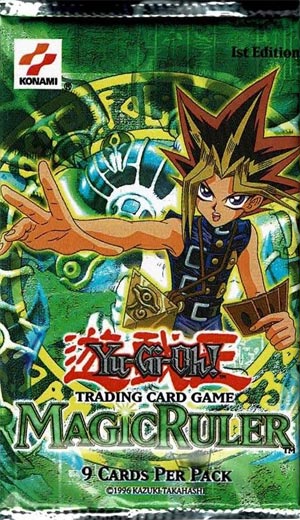 September 2002 released.  The set was later renamed to Spell Ruler after Magic the Gathering sued Yugioh.  This set is known for introducing many of the Spell staples.  While this set doesn’t totally revolutionize the meta, it does add power creep.

Monsters and Traps don’t get much.  Not a lot of great monsters aside from Cyber Jar.  The elemental battle recruiters like Giant Rat and Mother Grizzly are introduced but these attributes don’t have any worthwhile monsters to search out (apart from maybe Mystic Tomato to search out Witch or Sangan). Overall, how monsters interact with each other in this format are still similar to Medal Raiders.  Few to no viable traps: even Spellbinding Circle was mediocre at best.

Painful Choice.  While one of the most overpowered banned cards in the game by today’s standards, it wasn’t as abusable.  There weren’t graveyard effects or Special Summon from graveyard effects and Monster Reborn was the only recovery card.

Mystical Space Typhoon.  While Heavy Storm was needed as an out to many annoying spells/traps out there, MST is a more balanced and consistent 1-for-1 option.  This is also another out to Robbin Goblin, which may have been too abusable.

Delinquent Duo.  With the theme of hand advantage, Konami was inclined to make a card that’s the reverse of Pot of Greed.  However, this card can be overly punishing, grants card advantage with no skill required and was a bit too random.  Prior to Sinister Serpent, it didn’t really have any ways to play around it.

Confiscation and The Forceful Sentry.  Witch, Sangan and Magician of Faith were perhaps a bit too strong in the Metal Raiders meta.  Once on the field, they were difficult to counter.  But with these two cards, it’s now possible to get rid of them before they’re even in play.  However, it is also true that these cards are not fun to play against.  If your opponent draw one of them early on and you don’t, they have an unfair advantage of knowing your hand.

Snatch Steal.  While a powerful card for gaining field control, it wasn’t overpowered at the time: context matters.  Searchers and flip effects were the best monsters; there weren’t really any high ATK monsters with powerful ATK to steal yet.  It also had counters: MST was at 3 and there was Heavy Storm too.

Other Viable Spells.  Rush Recklessly, Axe of Despair, Messenger of Peace, Megamorph and Giant Trunade were also notable, but the other spells in this set have them outclassed.

Life Point costs.  Confiscation and Delinquent Duo are both staples that each cost 1000 life points.  This means that both players could effectively only have 6000 life points to work with and life points are more a resource.

The impact of the power spells.  They did add to the card pool more speed, diversity and more outs to certain threats.  However, the design of very powerful, yet broad, cards with very few resource costs did negatively impact the game later on.  Deck space got very tight.  Many newer spell cards in later sets couldn’t compete and power creep made them even more abusable.  Magic the Gathering could have handled these spells by adjusting their mana costs appropriately, but with Yugioh, there is no nuanced cost system.

Rituals are DOA.  Extremely situational in needing two very specific cards plus needing sacrifices, and on top of that most Ritual monsters in the set (with exception to the glibly justifiable Relinquished) don’t have any effects.

Toons are terrible.  None of them have effects.  There’s only 4 of them and 3 of them require tributes.  This set offers zero spells/traps to support them at all.  Toon World is necessary for them to even function, yet it costs 1000 life points each time its played and it has none of the protective effects from the anime or none at all.  And for some reason, they focus on direct attacks even though they never did that on the anime.