Holi: Festival of Colors is a new board game from Floodgate Games (https://floodgate.games) .  Holi is for 2-4 players, ages 13 & up.  Gameplay takes 20-40 minutes.  In Holi [hoh-lee], players gain “joy” by throwing color on the boards (higher levels are worth more points), getting color on others, and from collecting sweets.

According to Wikipedia: “Holi is a popular ancient Hindu festival, also known as the Indian “festival of colors”. The festival signifies the victory of good over evil. It originated and is predominantly celebrated in India, but has also spread to other regions of Asia and parts of the Western world through the diaspora from the Indian subcontinent.  People smear each other with colors and drench each other. Anyone and everyone is fair game, friend or stranger, rich or poor, man or woman, children, and elders. The frolic and fight with colours occurs in the open streets, parks, outside temples and buildings. Groups carry drums and other musical instruments, go from place to place, sing and dance. People visit family, friends and foes come together to throw coloured powders on each other, laugh and gossip, then share Holi delicacies, food and drink”

How does Holi play?

On your turn you can take 3 actions:

There are a few stipulations in the rule set, and they will make sense to gamers.

The principal of the game is very simple to grasp once you read the rules and play a practice game.

Scoring is pretty simple too.

And that’s the first time I’ve talked about Rivalry Cards.  There are 21 Rivalry Cards in the game.  Each game you will randomly put 3 cards in play.  These will change the dynamics from game to game.  You might get bonus points from color tokens on the edge of the board.  You may get to take another player’s sweets if you hit them with your color.

Likes, Dislikes and Final Thoughts on Holi: Festival of Color

Holi is easy to learn and teach.  One person can easily read the rules in 10 minutes, and then teach everyone how to play the game in about 5 minutes.  The 8-page rulebook is in full color, and is very well written.  The pieces, boards, and cards are all well made.

The game looks stunning on the table.  There definitely is a “Festival of Colors” on the table when you are playing it.  The components are well made.  The tier boards are made of clear plastic, and each square-space has a little well to keep pieces from moving around.  The game is also easy to assemble.

The game requires some thought and strategy.  The timing of your decisions can make or break the game for you.  Should you hang around on the bottom level and pick up sweets?  (There are more sweets on the lower levels, and none on the top level).  Or should you climb up as fast as possible and throw colors on the upper levels hoping to score more points?  Should you focus on Rivalry cards?

The storage box is well designed.  The game will break down and fit back into the box nicely. There is a molded plastic tray in the bottom of the box to put the columns and other pieces.

There is not too much to dislike here.  All I have are some nitpicks.   The colors can be hard to distinguish at times.  Look at the image below.  One of these is a green color token, and the other is yellow.  The shapes are different, but it can be hard to differentiate on the gameboard from your seat.

And for some reason, the Red Score Tracker looks a lot like a yellow player token:

These slight color differences can be confusing at times. 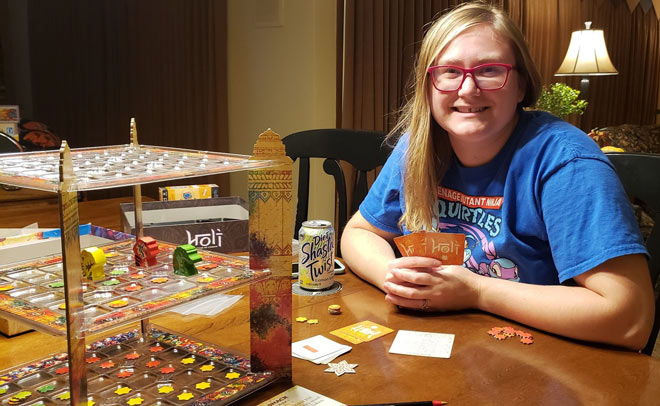 I know Holi might look a bit intimidating.  It looks like something Sheldon and Leonard might play on Big Bang Theory.  But don’t be scared off!  Holi is simple to learn, and we have had a fun time playing it.  Turns go pretty fast, so there is not much downtime.  The only thing that can slow the game down is if someone is having a hard time envisioning how their cards will actually play out, and where their paint will be flying.

You are constantly faced with fun/tough decisions every turn, and there are different paths to victory.  The 21 Rivalry Cards change the game every time Holi hits the table.

This is one of those games that is pleasant to play from beginning to end.  The game does not end until every has danced away all 25 of their color tokens.  And you never feel “out of it”.  Players won’t really know who has won until all the points are tallied up at the end.

Holi: Festival of Colors is a very cool game with a great theme.  It’s kind of like Splatoon, Paintball, 3D Chess and Tetris all smashed down into one fun, easy-to-play, colorful game.