What if you took Uno, Fluxx, Pig, and Crazy 8’s and smashed them all together into one game?  Well, you would have something close to “Blank” the card game.  But Blank also give you the opportunity to: 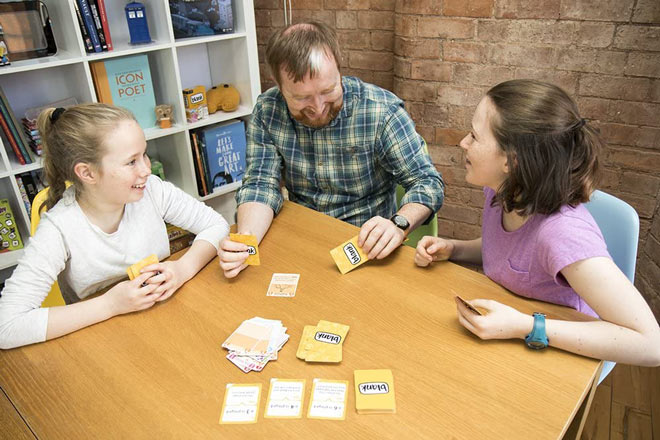 How do you play Blank?

Blank is a very simple game.  Everyone is dealt a hand of 7 cards, and the goal of the game is get rid of all your cards.

You make a Draw Pile from the remainder of the game cards.  Flip over the top card to make a Discard Pile, and the game starts.  Taking turns, each player must play at least one card their hands onto the Discard Pile.  Players must match the top color of the of the Discard Pile or the number on the discard pile.  You are allowed to play more than 1 card at the same time as long as all the cards you play are the same color or the same number.

In our game (example above), if:

If you mess up, you have to draw a card.  Keep playing until you have a winner.

The Winner Reaps the Rewards

When a game ends, the winner has the choice of two prizes:

This gives the winner a permanent place in the game’s history.

This is a very easy game to learn and teach.  You are basically up and running in just a few minutes. The rulebook is short, easy to read, and in full color.

The game is small, and thus is to travel with.  It’s perfect from rainy days on family vacations. 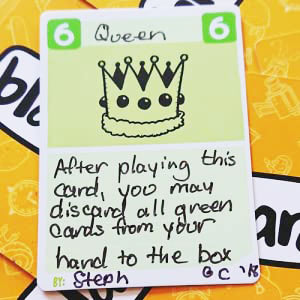 Games are over in 10 minutes.  This might be welcome when playing with people with short attention spans.  And if you are playing with a large interested group, you can rattle off several games in no time.

The customization of the game is fun.  It’s very cool to document your wins in a unique fashion.

There is a fun list of penalties in the rulebook.  My favorite is: If you falsely accuse another player of making a mistake – Take a penalty card.  I think this happened to me in the first round of my first game.

There is not much to dislike here.  The game is all about silly fun.

It can be hard to come up with “fair” rule cards that don’t make the game unbalanced.  You might want to coach younger kids on making good rules.  Or just let them draw a picture on the card until they get the hang of the game, and learn what would make a good rule. 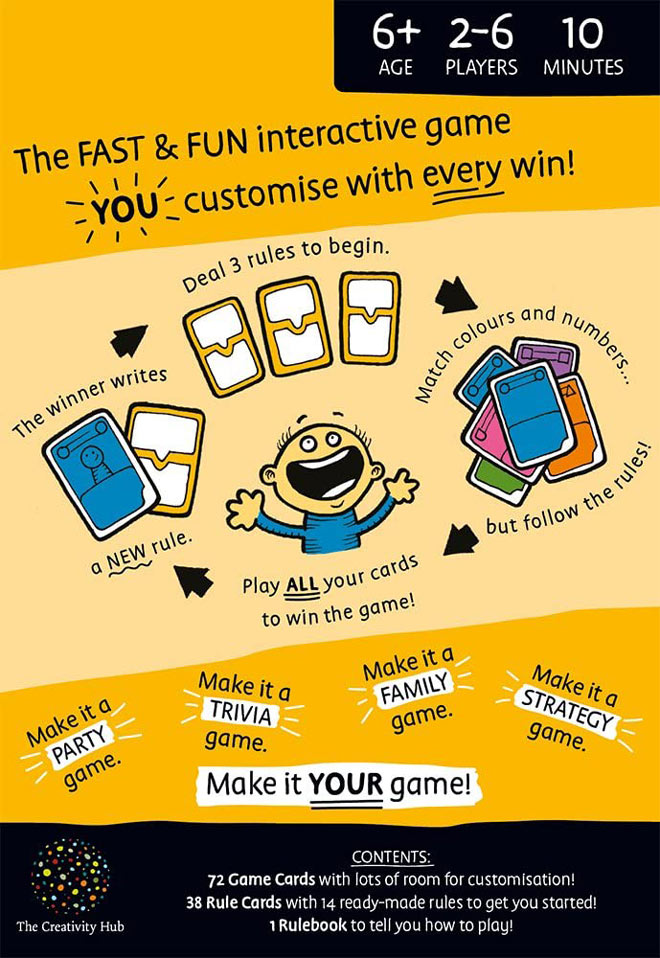 Blank is a very easy game to recommend to families with kids.  It is a nice step up from Uno.  Blank requires a little more thought than Uno, as Uno basically plays itself.

I love that Blank plays up to 6 players, and does not overstay its welcome.  I think everyone would have fun playing this game and customising the cards.

Small games make great stocking stuffers, and this would make a great gift for most gamers!