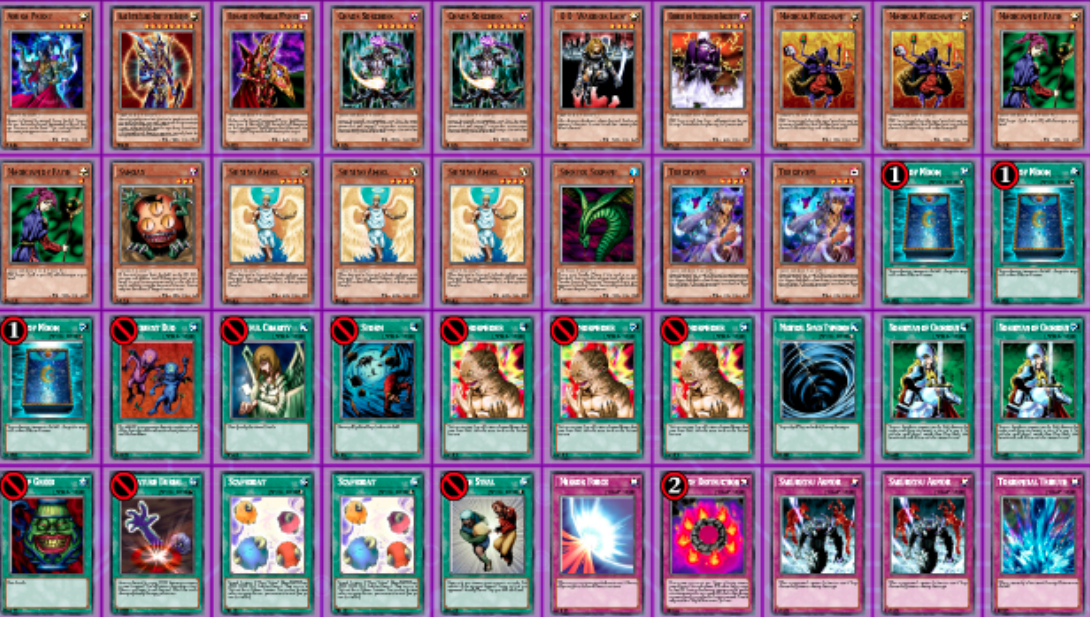 This deck tries to combine the strong early game that Shining Angel offers with the late game benefits of having both Chaos Sorcerers and a full Metamorphosis engine to summon Thousand-Eyes Restrict.  Unlike Recruiter Chaos, Mystic Tomato is forgone (because T.E.R. is a DARK for Sorcerer anyway).

Strong synergies the deck provides:
* Having 5 boss monsters between TER and Sorcerer.  If the opponent stops one of them, you can summon the other.
* Shining Angel supplements one of Chaos decks’ weaknesses by offering some sturdy field presence while the player is waiting to draw into (and summon) Sorcerer.
* 3 Book of Moon is viable because most monsters in this deck benefit from being set face-down as needed.
* Magician of Faith and Magical Merchant are searchable by Shining Angel to help consistently start plays involving Tsukuyomi or Metamorphosis.

Cards this deck omits:
This card is mostly Goat Control but it uses Chaos Sorcerers instead of Airknight Parshath.  Shining Angel is good graveyard fodder but not good Tribute fodder.  With Airknights gone, other omissions make sense.  The standard double Dust Tornado is not essential because you’re not protecting Airknight from Snatch, or clearing the field for your own Airknight attack.  Premature Burial and Call of the Haunted are missing out on their best revival target; as a result, running 1 or neither is recommended.  Tribe-Infecting Virus, due to no Airknight + revival combo, would be often without good discard fodder.

Weaknesses of the deck:
* No tribute monsters to allow you to capitalize on Metamorphosis’s ability to basically be a Change of Heart.
* Having Scapegoat and Shining Angel on the field is often redundant and the opponent will kill tokens instead of attacking Angel.
* Shining Angel having a battle-based effect makes it a relatively slow monster.